While most of the Western world was confined to their homes for the better part of two months this spring, my friends and I in Stockholm continued hanging out. In stark contrast to most other places, we went to restaurants (occasionally, outside when possible), to one another’s houses (in our yards when possible), and even sent our kids to school. As the rest of the world opens up again, not much will change in Stockholm. 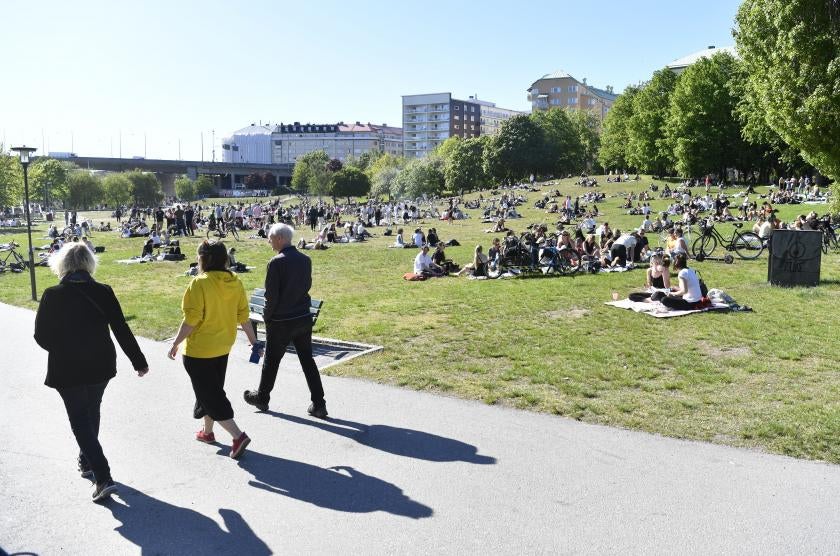 People enjoy sunny weather in Tantolunden park in Stockholm on 30 May, 2020, amid the novel coronavirus pandemic. (Photo by Henrik Montgomery/TT News Agency/AFP via Getty Images)

As an American expat living in the Swedish capital, I was initially angry at Sweden’s response to the Covid-19 pandemic. In my home country, early outbreaks in locations such as Seattle, New York City and the San Francisco Bay Area led to strict rules that were soon mirrored in many other states and cities. The Swedish strategy, meanwhile, boiled down mostly to recommendations: if possible, work from home; avoid unnecessary travel within the country; engage in social distancing; and if you’re above 70, stay home. I felt that in the face of a global pandemic, a country known for its generous welfare policies – that took such good care of its citizens – wasn’t doing its part to protect us.

My friends and I are mostly expats with young families who, early on, pulled our children out of school against official policy. (Schools here closed only for those 16 and over.) We eagerly waited to hear what further action our current country would take. Surely a land known for its progressive social policies would take fast, decisive action to protect its citizens?

The regulations that were put into place in Sweden amounted to restricting public gatherings to no more than 50 people (reduced from 500, which concert halls skirted by restricting entry to 499), limiting restaurants to table service only and no visiting retirement homes. People here did take the work-from-home guidelines to heart – no one I knew was going in to work. But bars and restaurants were full. My Instagram feed was a highlight reel of acquaintances clinking champagne flutes at the city’s major clubs and restaurants.

After the first few weeks, I slowly started meeting up with friends again. I sent my kids back to school, where they intentionally spent most of the day outdoors and drop-offs were restricted to outside only (parents weren’t allowed to enter the building). I was careful to take precautions like bringing hand sanitiser to playgrounds and wiping my hands after opening and closing the gate to school. Hardly anyone wore masks to the grocery shop or inside stores – the few times I’ve seen people wearing them, I’ve done a double take. One busy Friday night in late April at the local supermarket, there was a line out the door and someone regulating the number of customers allowed inside at the same time. I took a photo and sent it to my family in the US, saying: “Sweden finally catching up with the rest of the world!” (I haven’t seen entry to that store being regulated since.)

When I spoke to Swedish friends about the strategy, many agreed with the relaxed approach, mentioning that other countries’ draconian measures would be unnecessary in Sweden. A recent poll showed that just 11% of people in Sweden felt they did not trust state epidemiologist Anders Tegnell, who is leading the strategy. In this country, the onus was placed on citizens themselves to follow recommendations. It’s about personal judgement and individual responsibility within a framework that rested on mutual trust rather than top-down control. Swedes’ high level of interpersonal trust and trust in authority was often cited in the press as the characteristic enabling the relaxed Swedish strategy in tackling the virus, as opposed to social distancing becoming a matter of surveillance and policing like in Spain or Italy, where any nonessential socialising was forbidden.

In early May, Sweden’s ambassador to the US, Karin Ulrika Olofsdotter, said in an interview with the Washington Post that some media outlets made it look “like everyone in Sweden is out drinking and partying,” she said. “That is not the case.” But that was certainly how it felt to me. According to research by Esteban Ortiz-Ospina and Max Roser in 2016, in countries such as Norway, Sweden and Finland, more than 60% of respondents in the World Value Survey think people can be trusted. And in the other extreme, in countries such as Colombia, Brazil, Ecuador and Peru, less than 10% think this is the case.

Of course, many places in the US also took a similarly relaxed approach to tackling the pandemic, with conservative lawmakers and anti-lockdown activists citing Sweden as taking the right approach. Sweden, rarely finding cheerleaders among conservative US circles, suddenly stood as an example to follow. But since then, places such as Arizona, Texas and Florida have all seen significant spikes in cases following reopenings and are being deemed the new epicentres of the virus – while Sweden’s numbers have stabilised. According to some reports, the death toll in Sweden is one of the highest in the world per capita, but the total number of Swedish deaths remains at just above 5,000, compared with over 120,000 in the US, over 43,000 in the UK, over 28,000 in Spain and over 34,000 in Italy. The mortality rate in Sweden and the number of new intensive-care cases in the country declined in the last week, and contagion rates here are now “stable,” according to the WHO.

Although it didn’t always feel like it at the time, Sweden issued clear guidance from the beginning, with the expectation that people would choose to follow it. It certainly was my experience that everyone I knew stopped going into the office and started working from home. William Hanage, an associate professor of epidemiology at Harvard’s School of Public Health, attributed Sweden’s slowing of the virus to implementing guidance early on. “Sweden’s policy is unusual in that it took a much less stringent approach to preventing transmission,” he says. “But interestingly, it implemented those measures at a very early stage in the pandemic, before large amounts of community spread had occurred.”

Now I go outside, and all too often realise I’ve left my hand sanitiser at home. I even met a friend for lunch outdoors at a busy cafe one particularly sunny day and another indoors one Friday night for dinner. In May, I had a birthday bash in my garden with a dozen or so friends, and we ended up at the local bar. I always felt guilty after, as if I’d done something wrong that I couldn’t tell my family in Baltimore about. When I watched international news or spoke to family back home, I would feel a certain cognitive dissonance between my own seemingly low-risk reality and what I knew to be happening in the rest of the world. My family in the US calls me sceptically questioning why I’ve had people over in my garden or been out to eat. I can’t explain the lack of logic that permits an entire city’s citizens to operate life as normal in the midst of a global pandemic. But Stockholm has become a bubble of exactly this.

Being relatively young and healthy, I’m not so worried about getting sick. Even though young and healthy people have gotten seriously ill, there haven’t been any reported cases at my kids’ or any of my friends’ kids’ schools. Nobody I know in Stockholm has gotten sick, allowing me to feel a certain distance from it. But my husband’s parents are in their mid-70s and weren’t able to see their grandchildren for two months save for a few visits to their hallway, where we wave and blow kisses to them standing at the door.

I’ve been grateful – but also felt a sense of guilt for – my freedom here. When there are no hard-and-fast rules about how to act, it’s easy to constantly question yourself: is it really OK to be outside, sitting at this full cafe? Is it OK to invite a few friends over for a birthday? Is it OK to send my kids to school? These questions have surely gone through minds around the world in the past several weeks, and now it’s clear that that behaviour had dire consequences in some cities and not others.

While Swedish social media at times suggests an endless, friend-filled party at summer homes and popular hangouts, the reality here is a balancing act between personal judgement and the freedom to continue life as normal. Self-regulation is what it comes down to in Sweden, anyway.