Like a one-man Google Earth, on 8 August 1909, Swiss aviation pioneer Eduard Spelterini flew a gas-filled balloon from the French town of Chamonix to Switzerland – a distance of 100 miles over the Alps.

While the flight was extraordinary for being the first aerial crossing of the central Alps from west to east, it now holds a special significance of which Spelterini was unaware. The balloonist was also a photographer who captured a series of glass-plate images of the Mer de Glace (“sea of ice”) glacier that descends from the Mont Blanc Massif in a dramatic sweep.

Spelterini’s interest in recording the alpine landscape was both scientific and aesthetic, and the results are striking. This collection of images survives today as a record of the glacier that is unique in its detail and antiquity.

But crucially, they can be used to measure how much this landscape has changed in the intervening years. In 1909, no one could have guessed how significant these glaciers would become to environmental science, or just how rapidly they would be affected by rising temperatures in the century that followed.

The flight over the Mer de Glace was unusual because Spelterini’s aerial photographs rarely focused on the glaciers, instead more often framing the peaks and other geological features. He was also unaware that the distribution of his photographs along the balloon’s flight path, pictured below, would make excellent material for digital analysis more than 100 years later. 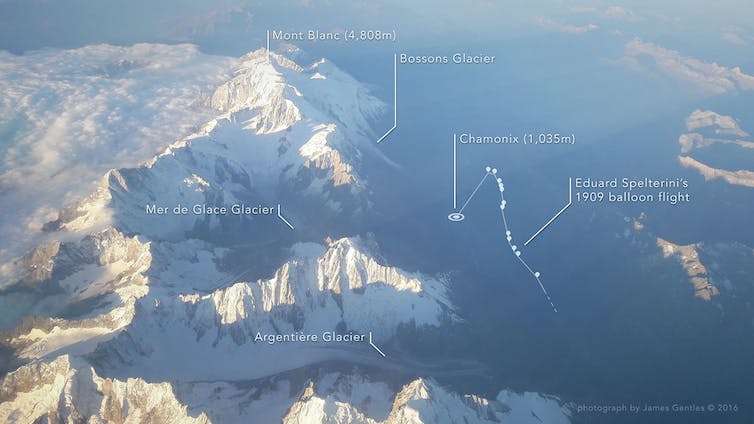 By identifying common features in the photographs, which can in turn be linked to surveyed features in the landscape, a 3D representation of both the balloon flight and the historical topography can be reconstructed using photogrammetry – the science of taking measurements from photography. While the oblique angle of the photographs limits the measurable accuracy of the resulting data, compared to the vertical mapping photographs taken in the decades that followed, they still provide a unique and compelling glimpse into a past landscape.

In Spelterini’s image below, the oblique aerial view taken at a sideways angle towards the horizon gives a sense of place that is part way between the familiar ground level view and the high vertical perspective like that of a map. In the foreground the newly completed Montenvers cogwheel railway is visible, perched over the voluminous Mer de Glace glacier which leads the eye to the spires of the Mont Blanc Massif in the background. 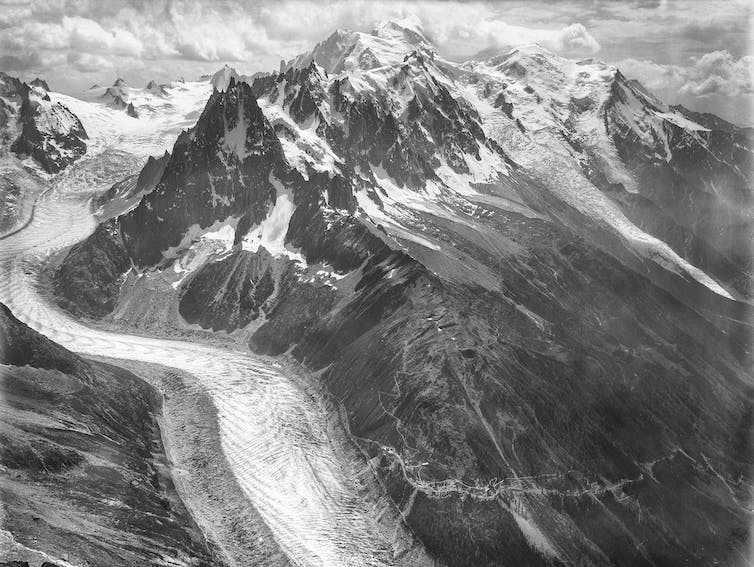 The Montenverscog railway in the foreground was recently completed when Spelterini took this photograph. Image: Eduard Spelterini/author provided.

The photographs are carefully composed, designed to serve as both record and artwork. Their oblique angle makes them less abstracted and more relatable, despite their height above the ground and the scale of the landscape they depict. All of these factors make them an ideal point of reference for visualising the changing nature of the alpine landscape.

In October 2017, a team of photographers and researchers from the University of Dundee returned to Chamonix to replicate the path of the historic flight and recreate the sequence of photographs using a helicopter. Spelterini’s balloon rapidly ascended to around 2,000m above the Chamonix valley before passing Mer de Glace. Such heights are virtually inaccessible to unmanned drones, meaning that a manned aircraft was needed.

The results are documented in The 100-year Time-Lapse Project. GPS coordinates derived digitally from Spelterini’s photographs were used to return to the same locations to capture current-day equivalents of both his individual photographs and the 3D surface reconstruction. While the rate of change in the Mer de Glace glacier has been studied in great detail, using digital technology in this way allows for a visual comparison of the landscape then and now to reveal the staggering reduction in the ice surface that has taken place over the last century.

Today, visitors alighting at the Montenvers railway station are no longer confronted with the Mer de Glace at close range, but instead look down upon a largely empty valley and debris-covered glacier far below. Here the ice surface has dropped around 100 metres compared to its height in 1909. Scientists have calculated that, overall, the glacier has lost around 700m cubic metres of water since the beginning of the 20th century.

While the facts and figures alone should be enough to narrate the impact that the previous century of greenhouse gas emissions have had on our climate and environment, images like these help drive the point home. Eduard Spelterini was not just a pioneer of aviation but also of aerial photography as a way of better understanding the natural world. His images capture an emotive sense of place while providing insights into aspects of the landscape that are not available from the ground.

Today, despite the heavy carbon footprint that comes with manned aviation, we continue to rely on aerial views to interpret our environment, from Landsat satellite imagery to low-level drone photography. By repurposing archival aerial photographs and continuing the legacy of photographers like Spelterini, with the help of current technology, we can explore new and compelling ways to visualise our rapidly changing glacial landscapes.

As well as serving to convince hearts and minds in the present political debates surrounding climate change, these images will also form a poignant record of magnificent landscapes that will no longer be around for future generations to experience.