Shortly after 4 a.m. on a crisp, cloudless September morning in 1859, the sky above what is currently Colorado erupted in bright red and green colors. Fooled by the brightness into thinking it was an early dawn, gold-rush miners in the mountainous region of what was then called the Kansas Territory woke up and started making breakfast. What happened in more developed regions was even more disorienting, and carries a warning for the wired high-tech world of the 21st century.

As the sky lit up over the nighttime side of the Earth, telegraph systems worldwide went berserk, clacking nonsense code and emitting large sparks that ignited fires in nearby piles of paper tape. Telegraph operators suffered electrical burns. Even disconnecting the telegraph units from their power sources didn’t stop the frenzy, because the transmission wires themselves were carrying huge electrical currents. Modern technology had just been humbled by a fierce space weather storm that had arrived from the sun, the largest ever recorded – and more than twice as powerful as a storm nine years earlier, which had itself been the largest in known history.

My seven years of research on predicting solar storms, combined with my decades using GPS satellite signals under various solar storm conditions, indicate that today’s even more sensitive electronics and satellites would be devastated should an event of that magnitude occur again. In 2008, a panel of experts commissioned by the National Academy of Sciences issued a detailed report with a sobering conclusion: the world would be thrown back to the life of the early 1800s, and it would take years – or even a decade – to recover from an event that large.

Space weather storms have happened since the birth of the solar system, and have hit Earth many times, both before and after that massive event in 1859, which was named the Carrington event after a British astronomer who recorded his observations of the sun at the time. They’re caused by huge electromagnetic explosions on the surface of the sun, called coronal mass ejections. Each explosion sends billions of protons and electrons, in a superheated ball of plasma, out into the solar system.

About 1 in every 20 coronal mass ejections heads in a direction that intersects Earth’s orbit. Around three days later, our planet experiences what is called a space weather storm or a geomagnetic storm.

While these events are described using terms like “weather” and “storm,” they do not affect whether it’s rainy or sunny, hot or cold, or other aspects of what it’s like outdoors on any given day. Their effects are not meteorological, only electromagnetic. 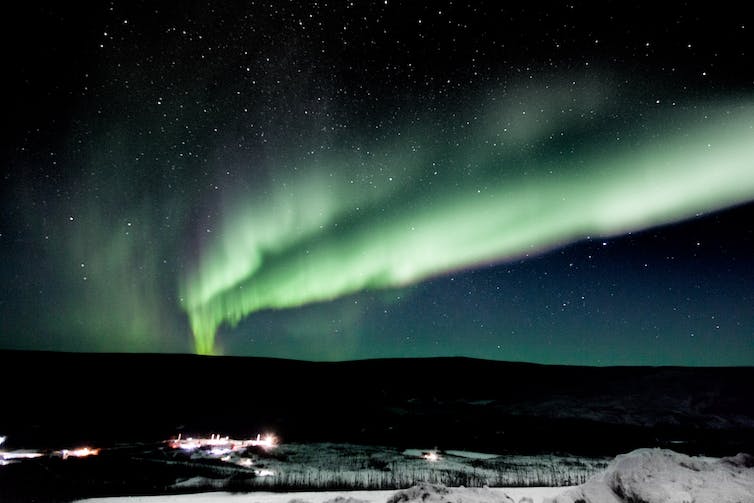 Aurorae are signs of a geomagnetic storm. Image: NASA/Terry Zaperach.

When the coronal mass ejection arrives at Earth, the charged particles collide with air molecules in the upper atmosphere, generating heat and light called aurora.

Also, as happens anytime moving electrical charges encounter a magnetic field, the interaction creates a spontaneous electrical current in any conductor that’s available. If the plasma ball is big enough, its interaction with Earth’s magnetic field can induce large currents on long wires on the ground, like the one that overloaded telegraph circuits in 1859.

On 13 March, 1989, a storm only about one-fifth as strong as the Carrington event hit Earth. It induced a large surge of current in the long power lines of the Hydro-Quebec power grid, causing physical damage to transmission equipment and leaving 6m people without power for nine hours. Another storm-induced power surge destroyed a large transformer at a New Jersey nuclear plant. Even though a spare transformer was nearby, it still took six months to remove and replace the melted unit. Some people worried that the bright auroral lights meant nuclear war had broken out.

And in October 2003, a rapid series of solar storms affected Earth. Collectively called the Halloween solar storm, this series caused surges that threatened the North American power grid. Its effects on satellites made GPS navigation erratic and interrupted communications connections during the peak of the storm.

Larger storms will have wider effects, cause more damage and take longer to recover from.

Geomagnetic storms attack the lifeblood of modern technology: electricity. A space weather storm typically lasts for two or three days, during which the entire planet is subjected to powerful electromagnetic forces. The National Academy of Sciences study concluded that an especially massive storm would damage and shut town power grids and communications networks worldwide. 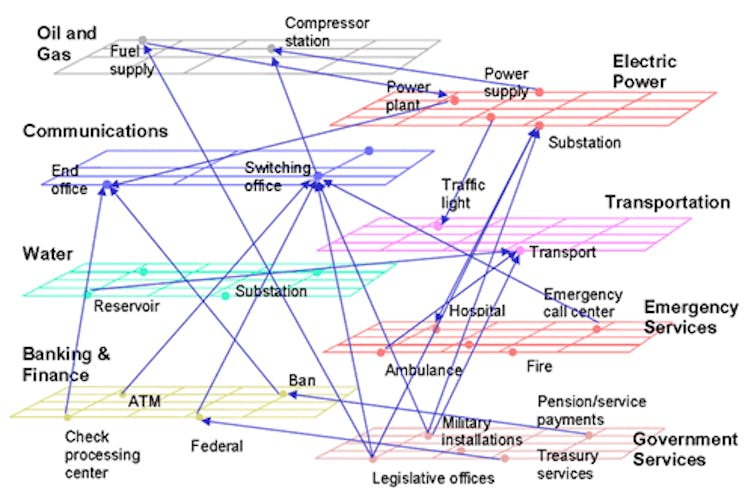 Electricity, shown in the upper right, is integrated into every aspect of modern life. Image: Federal Communications Commission.

After the storm passed, there would be no simple way to restore power. Manufacturing plants that build replacements for burned-out lines or power transformers would have no electricity themselves. Trucks needed to deliver raw materials and finished equipment wouldn’t be able to fuel up, either: gas pumps run on electricity. And what pumps were running would soon dry up, because electricity also runs the machinery that extracts oil from the ground and refines it into usable fuel.

With transportation stalled, food wouldn’t get from farms to stores. Even systems that seem non-technological, like public water supplies, would shut down: their pumps and purification systems need electricity. People in developed countries would find themselves with no running water, no sewage systems, no refrigerated food, and no way to get any food or other necessities transported from far away. People in places with more basic economies would also be without needed supplies from afar.

It could take between four and 10 years to repair all the damage. In the meantime, people would need to grow their own food, find and carry and purify water, and cook meals over fires.

Some systems would continue to operate, of course: bicycles, horse-drawn carriages and sailing ships. But another type of equipment that would keep working provides a clue to preventing this type of disaster: electric cars would continue to work, but only in places where there were solar panels and wind turbines to recharge them.

Geomagnetic storms would affect those small-scale installations far less than grid-scale systems. It’s a basic principle of electricity and magnetism that the longer a wire that’s exposed to a moving magnetic field, the larger the current that’s induced in that wire.

In 1859, the telegraph system was so profoundly affected because it had wires stretching from city to city across the U.S. Those very long wires had to handle enormous amounts of energy all at once, and failed. Today, there are long runs of wires connecting power generators to consumers – such as from Niagara Falls to New York City – that would be similarly susceptible to large induced currents.

The only way to reduce vulnerability to geomagnetic storms is to substantially revamp the power grid. Now, it is a vast web of wires that effectively spans continents. Governments, businesses and communities need to work together to split it into much smaller components, each serving a town or perhaps even a neighborhood – or an individual house. These “microgrids” can be connected to each other, but should have protections built in to allow them to be disconnected quickly when a storm approaches. That way, the length of wires affected by the storm will be shorter, reducing the potential for damage.

A family using solar panels and batteries for storage and an electric car to get around would likely find its water supply, natural gas or internet service disrupted. But their freedom to travel, and to use electric lights to work after dark, would provide a much better chance at survival.

When will the next storm hit?

People should start preparing today. It’s impossible to know when a major storm will hit next: the most we’ll get is a three-day warning when something happens on the surface of the sun. It’s really only a matter of time before there is another one like the Carrington event.

Solar astrophysicists are also studying the sun to identify any events or conditions that might herald a coronal mass ejection. They’re collecting enormous amounts of data about the sun and using computer analysis to try to connect that information to geomagnetic storms on Earth. This work is underway and will become more refined over time. The research has not yet yielded a reliable prediction of a coming solar storm before an ejection occurs, but it improves each year.

In my view, the safest course of action involves developing microgrids based on renewable energy. That would not only improve people’s quality of life around the planet right now, but also provide the best opportunity to maintain that lifestyle when adverse events happen.