So what does this mean for people who live in the tropical zones, where 40 per cent of the world’s population lives? On current trends, this figure will rise to 50 per cent by 2050. With tropical economies growing some 20 per cent faster than the rest of the world, the result is a swift expansion of tropical cities. 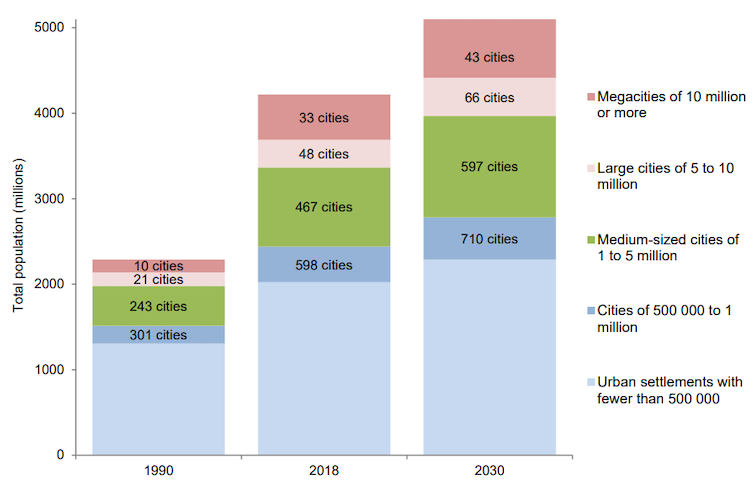 The populations of these growing tropical cities already experience high temperatures made worse by high humidity. This means they are highly vulnerable to extreme heat events as a result of climate change.

For example, extremely hot weather overwhelmed Cairns last summer. By December 3 2018, the city had recorded temperatures above 35°C nine days in a row. Four consecutive days were above 40°C.

For our research, temperature and humidity sensors were strategically placed in the Cairns CBD to represent people’s experience of weather at street level. These recorded temperatures consistently higher than the Bureau of Meteorology (BoM) recordings, reaching 45°C at some points. 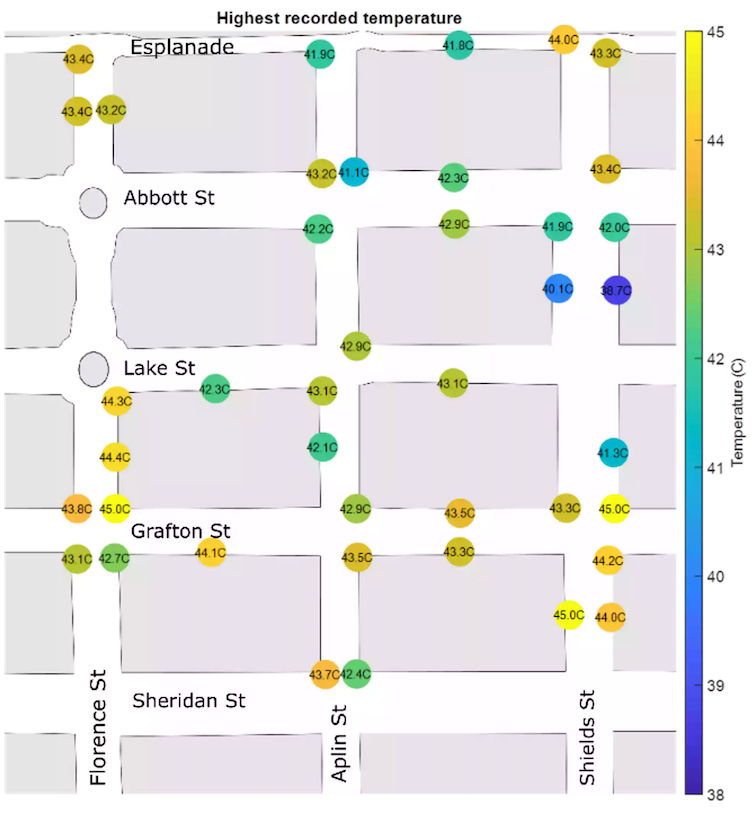 Urban environments in general are hotter than non-urbanised surroundings that are covered by vegetation. The trapping of heat in cities, known as the urban heat island effect, has impacts on human health, animal life, social events, tourism, water availability and business performance.

The urban heat island effect intensifies the impacts of increasing heatwaves on cities as a result of climate change. 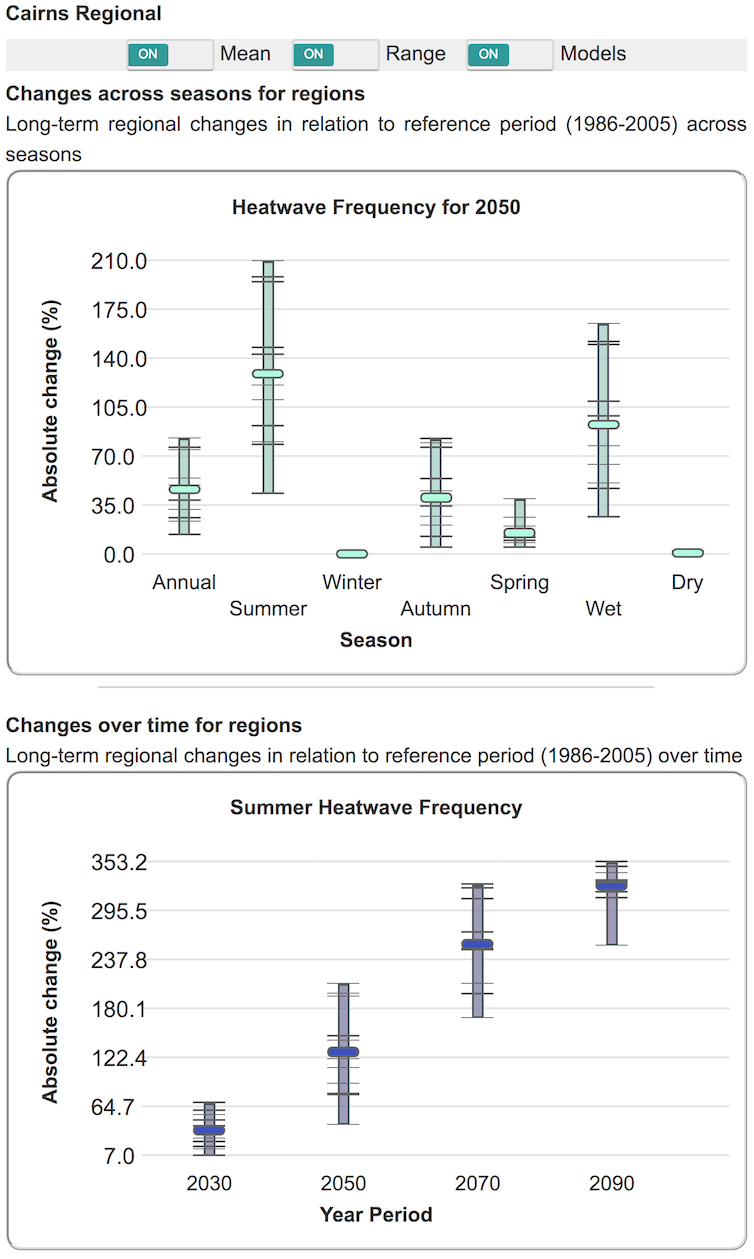 But it is important to remember that other local factors also influence these impacts. These include the scale, shape, materials, composition and growth of the built environment in a particular location and its surrounding areas.

The differences between the BoM data recorded at Cairns airport and the inner-city recordings show the impacts of urban expansion patterns, built form and choice of materials in tropical cities.

The linear layout of Cairns has, on one hand, enabled the formation of attractive places for commercial activities. As these activity centres evolve into focal points of urban life, they in turn influence all sorts of socioeconomic parameters.

On the other hand, the form the built environment takes changes the patterns of wind, sun and shade. These changes alter the urban microclimate by trapping heat and slowing or channelling air movements. 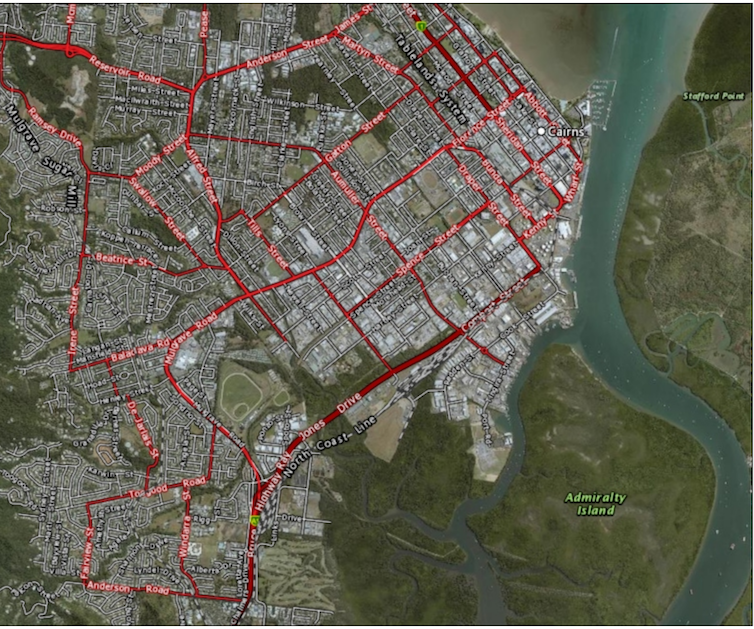 Shifting the focus to the tropics

To date, a large body of research has explored the undesired consequences of climate change and urban heat islands. However, the focus has been on capital and metropolitan cities with humid continental climates. Not many studies have looked at the economic and social impacts in the tropical context, where hot and humid conditions create extra heat stress.

Add the combined effects of climate change and urban heat islands and what are the socio-economic consequences of heatwaves in a tropical city like Cairns? We see that climate change adds another dimension to the relationship between cities, economic growth and development.

This presents a huge opportunity to start thinking about building cities that are not superficially greenwashed, but which instead tackle pressing issues such as climate variability and create sustainable business and social destinations.

In cold climates, heatwaves and urban heat islands are not necessarily undesired, but their negative impacts are more obvious and harmful in warmer climates. And these harmful impacts of heatwaves on our economy, environment and society are on the rise.

We have scientific evidence of the increasing length, frequency and intensity of heatwaves. The number of record hot days in Australia has doubled in the past five decades. 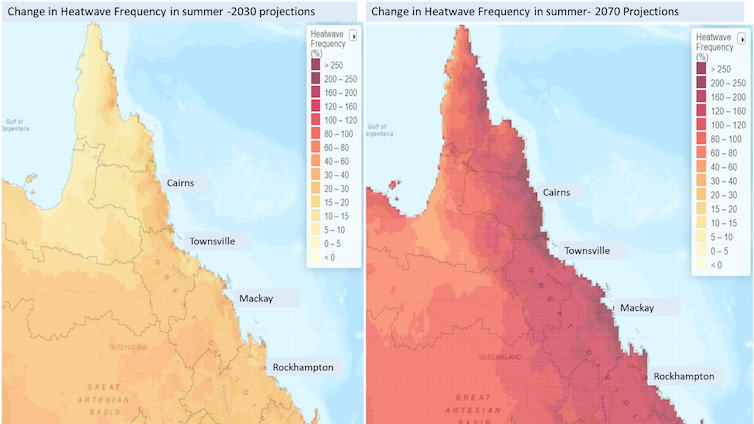 What are the costs of heatwaves?

Increased exposure to heatwaves amplifies the adverse economic impacts on industries that are reliant on the health of their outdoor workers. This is in addition to the extreme heat-related fatalities and health-care costs of heatwave-related medical emergencies. As a PwC report to the Commonwealth on extreme heat events stated:

Heatwaves kill more Australians than any other natural disaster. They have received far less public attention than cyclones, floods or bushfires — they are private, silent deaths, which only hit the media when morgues reach capacity or infrastructure fails.

The 2017 Farm performance and climate report by the Australian Bureau of Agricultural and Resource Economics and Sciences (ABARES) states:

The recent changes in climate have had a significant negative effect on the productivity of Australian cropping farms, particularly in southwestern Australia and southeastern Australia.

Average climate effect on productivity of cropping farms in southwestern and southeastern Australia since 2000–01 (relative to average conditions from 1914–15 to 2014–15). Image: Farm performance and climate, ABARES.

It’s not just farming that is vulnerable. A Victorian government report report this year estimated an extreme heatwave event costs the state’s construction sector A$103 million. The impact of heatwaves on the city of Melbourne’s economy is estimated at A$52.9 million a year on average.

According to this report, economic costs increase exponentially as the severity of heatwaves increases. This has obvious implications for cities in tropical regions.

As the next step in our research, we are examining the relationship between local urban features, urban heat islands, the resulting city temperatures and their direct and indirect (spillover) effects on local and regional economic activities.