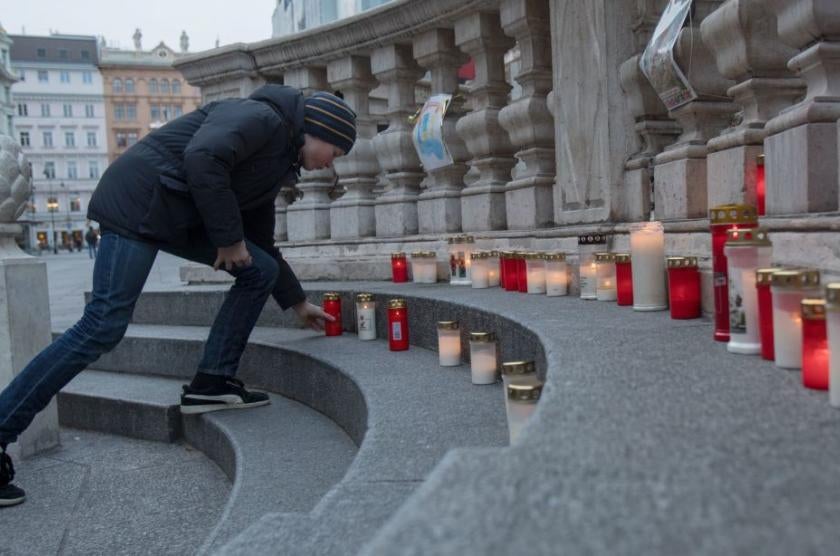 A boy places a candle at Vienna’s plague memorial, the Trinity Column. (Photo by Alex Halada/AFP via Getty Images)

Dating back to 1679, the enormous, elaborate, centrally located pillar commemorates the Great Plague, in which more than 80,000 people died. More than three centuries later, the monument became a logical gathering place for memorialising those who have died during the coronavirus pandemic, which has a still-rising death toll of more than 400,000 around the world.

Public memorials often serve as solemn places for solace-seekers during and after disasters. At their most powerful, they offer “a gentle push toward a thoughtful or empathetic frame of mind”, says Dr. Mechtild Widrich, an associate professor in the School of the Art Institute of Chicago’s Department of Art History, Theory and Criticism.

But unlike with wars, terrorism or other disasters, surprisingly little has been done to commemorate victims of pandemics, including the global outbreak that Covid-19 most closely resembles, the 1918 influenza pandemic that killed tens of millions worldwide. Similarly, despite the fact that Ebola is one of the most relentless and fatal diseases in human history, little has been built to commemorate those who have died from it.

That has to do, in part, with the complex nature of memorials. “Historically, monuments were made for the victor,” Widrich says. While those who succumb to a disease may have fought heroically, they are not mourned in the same way as fallen soldiers, whose deaths may have been a sacrifice for a greater cause. The challenge of designing a memorial is capturing the particular struggle of those it honours and conveying an appropriate tone – one that doesn’t suggest celebration or triumph after the ordeal is over. 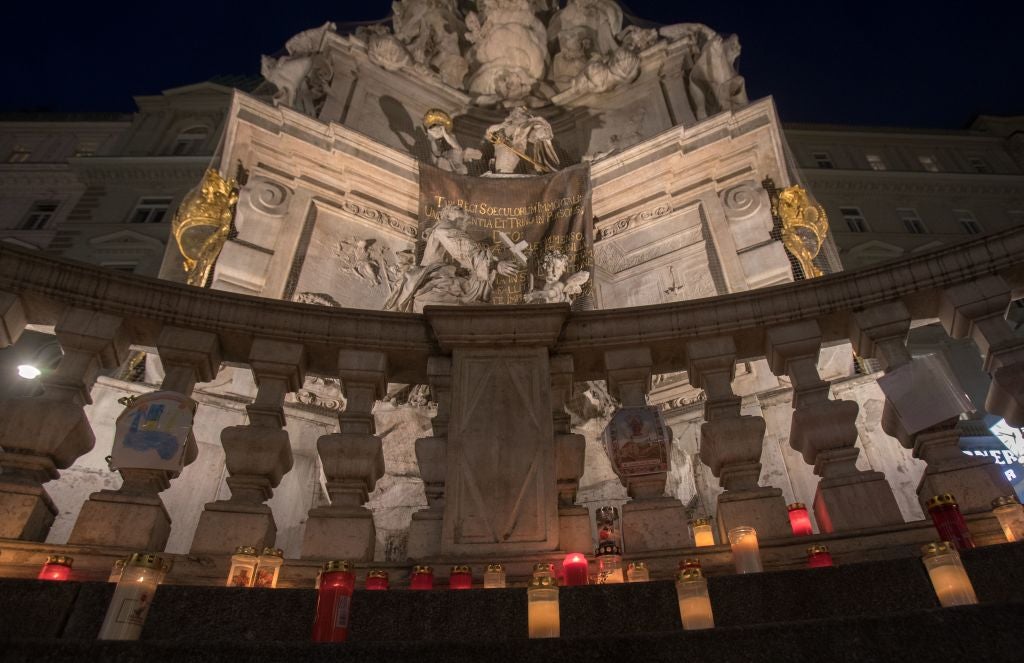 Vienna’s plague memorial, the Trinity Column, quickly became a place for mourners to memorialise the victims of the Covid-19 pandemic. (Photo by Alex Halada/AFP via Getty Images)

The pandemic has waned in some of the hardest-hit epicentres like Italy and New York, while it’s still raging in others like Brazil. Architects and planners everywhere are focusing on designing for life in response to Covid, but it’s in some of these ravaged areas where discussions could soon turn to considering the overwhelming task of creating meaningful, lasting monuments to the victims of this pandemic.

One of the most obvious, moving examples of dedicated public space for reflection and contemplation about a pandemic is the National AIDS Memorial Grove in San Francisco’s Golden Gate Park, designated as a national memorial in 1996, 15 years after what became known as HIV/Aids was first mentioned in US medical literature. In the five years before its official designation, hundreds of volunteers collaborated on annual workdays to beautify the grounds and design a memorial space that earned the city’s participation and, eventually, recognition from the US Congress. 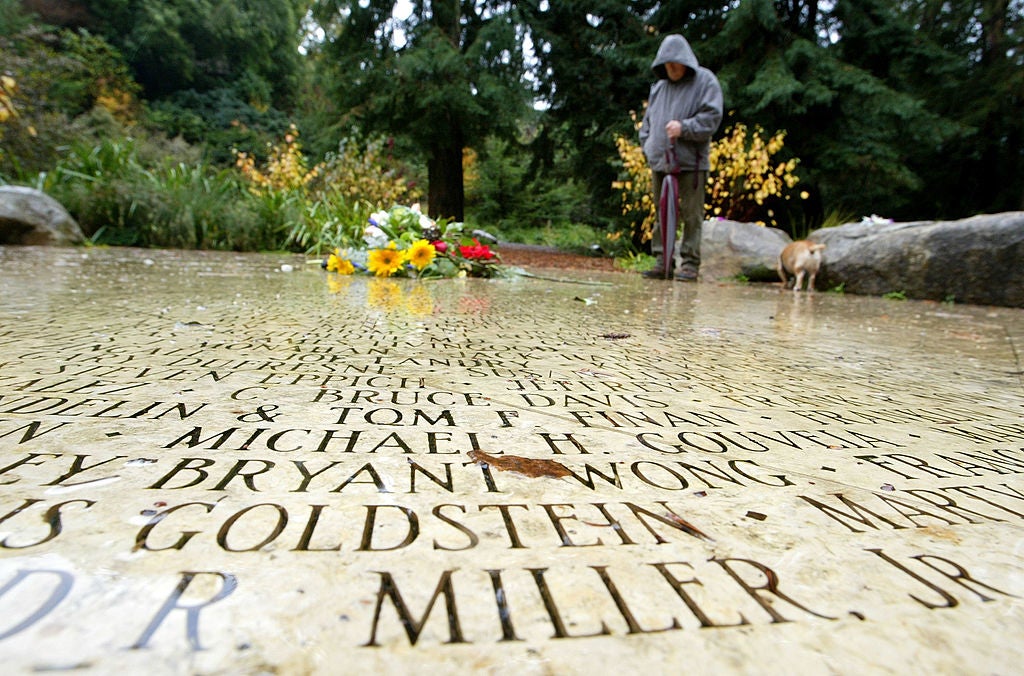 A man looks at the engraved names of Aids victims at the National AIDS Memorial Grove in San Francisco. (Photo by Justin Sullivan/Getty Images)

The space is sombre and beautiful, with a blend of natural redwood trees and stone structures rendered with the names of the dead. It feels welcoming to the public and sobering without being scary. It has also served as an inspiration for other memorials: in the past year, related projects have coalesced under its stewardship, including the AIDS Memorial Quilt and two HIV/Aids oral-history projects that have preserved more than 1,000 stories from survivors and loved ones.

The goal of the grove extends beyond memorialising those who died of Aids. It serves as a physical space that furthers the mission of keeping Aids at the forefront of the national conversation. For that reason, it may serve as one of the most useful models for Covid-19 commemorations.

Much like Vienna’s plague column, the Aids memorial is also a space for communing during tragedy. “Over the past decade, the grove has been the site of spontaneous gatherings in other times of great loss,” says John Cunningham, the memorial’s executive director, noting mass shootings have brought San Franciscans to the garden in collective mourning. “Hundreds gathered here after Newtown, when the nation was in a state of mourning, and again after Pulse nightclub, to remember the tragedy there and also redouble our efforts toward social justice and human rights.”

The lack of a memorial or place to gather – even something as obvious and seemingly simple as a burial ground – can add to feelings of grief and loss. Numerous strains of Ebola have emerged in the past 40 years, yet little physical space is designated to mourn the terrible, ever-growing death toll.

Between 2014 and 2016, the world’s largest-ever Ebola outbreak devastated West African nations including Guinea, Liberia and Sierra Leone, killing more than 11,325 people. The current ongoing, second-largest Ebola epidemic, centred in the Democratic Republic of Congo – the nation’s tenth in 40 years – has raged since August 2018, killing more than 2,270 people, and showed tentative signs of finally slowing last month.

Due to both the magnitude and severity of the contagion, death caused by Ebola frequently leaves survivors without a body to bury. Bodies are often cremated to stem the epidemic, and in some areas, this means families do not hold funerals and have no cemetery to visit. This complicates important commemorations, such as Decoration Day in Liberia, when families spend time at and spruce up their loved ones’ grave sites – and it also informed the creation of Liberia’s Ebola Memorial Cemetery, which was initially unattended but then designated an official memorial in 2016.

While large physical gatherings are still mostly off limits due to Covid, much of the early work to memorialise the coronavirus pandemic has begun in a virtual setting. To try to measure the overwhelming death toll, several news organisations have devoted resources to tracking Covid deaths. A small alliance of interfaith and social justice groups held a 24-hour virtual memorial in late May, reading aloud via live-stream tens of thousands of names of people who died from Covid.

Other personal projects, such as the FacesOfCOVID Twitter account, seek to compile even a small percentage of the fatalities. Alex Goldstein, who runs a strategic-communications firm in Boston, started the account in March and publishes several dozen obituaries every day with the help of his friend Scott Zoback. They also receive photos and stories directly from family members whose relatives died of the coronavirus.

Goldstein grew up in the shadow of a different disaster; he was a high school senior on September 11, 2001. For him, profound memories of 9/11 include crowds of thousands attending the funerals of firefighters and the services broadcast to thousands more viewers. “But the nature of this pandemic limits our ability to gather, and that impacts how we mourn and grieve,” he says.

How these early digital projects might translate into physical monuments and memorials is unclear. In the aftermath of many disasters, makeshift memorials often arise first, as do digital remembrances. In the case of a catastrophe such as a terrorist attack or natural disaster, the designated memorial site is typically obvious. 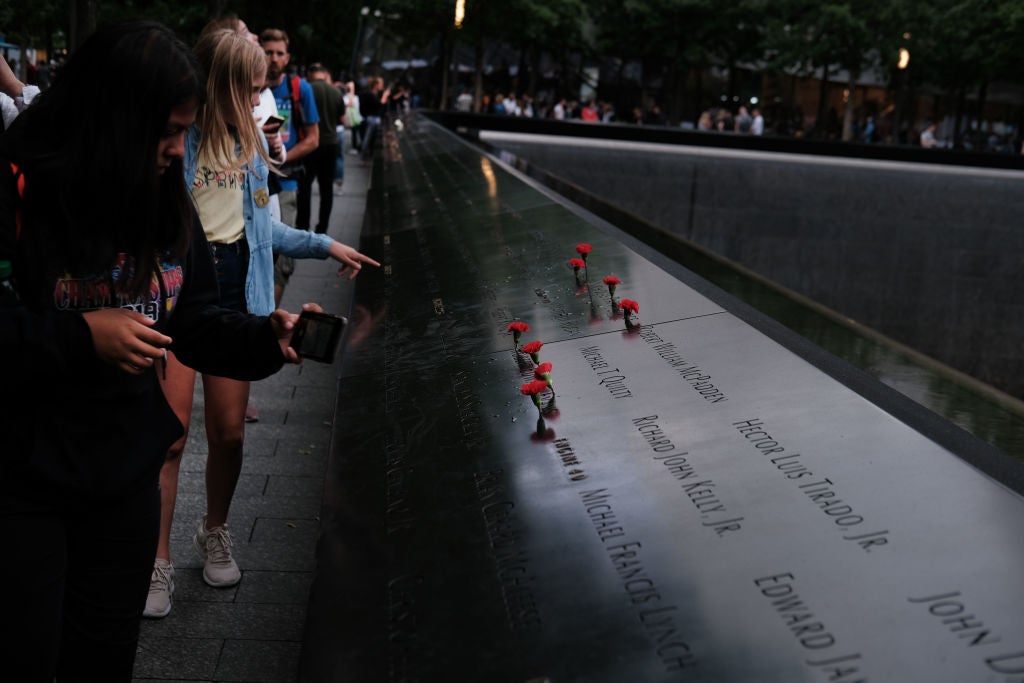 People pause during a visit to the National September 11 Memorial & Museum in New York City. (Photo by Spencer Platt/Getty Images)

That doesn’t mean the process is straightforward when constituencies gather to negotiate the physical and emotional range the piece will convey. The process of selecting architects, artists and designers can be fraught. The National September 11 Memorial and Museum in New York City, for example, was the subject of political and economic debates for fundraising disputes and budget-related delays. Many victims’ families boycotted the memorial, aghast that it would house unidentified human remains and commercially profit from entrance fees and a gift shop.

Some countries in particular might choose to include an element that reminds visitors of the devastating effects of a slow or inadequate public health response. For that, they could draw inspiration from a memorial in Hong Kong that pays homage to frontline healthcare workers who treated patients suffering from another coronavirus, severe acute respiratory syndrome (SARS). In addition to the eight medical professors honoured in the small park, the 2003 SARS epidemic killed nearly 300 people.

Cunningham notes that the National AIDS Memorial, created during a pandemic that has still not ended, offers a physical template for plague memorials as well as emotional and spiritual reminders on how to persevere through Covid.

“The grove offers those living through a new pandemic a legacy of resilience,” he says, “and the reminder to never give up hope.”

Britta Shoot is a freelance writer based in San Francisco.