Along with Mars, Jupiter’s moon Europa has long captured the imagination of science fiction writers as a potential place for life in the solar system beyond Earth. In science fact, missions have found hints of a subsurface water ocean below the icy crust of the moon. And where there’s warm, liquid water, and the right chemistry, there could indeed be life.

Finding out whether this is the case is not going to be easy though. One complicated and expensive solution would be landing on the moon and drilling a hole through the ice to sample the water beneath. But now research has thrown up a better option. The exciting results, published in Nature Astronomy, suggest there may be plumes emanating from Europa’s ocean – meaning a spacecraft could simply fly though them to test the water. The findings are important for the upcoming Europa Clipper missions and JUICE missions.

It’s not the first time it’s been suggested that there are geyser-like features on the moon. The Hubble Space Telescope saw transient signs of plumes from Europa’s subsurface ocean in 2012 and 2016. However, the result was controversial – the data was after all captured from far away (Hubble orbits the Earth). The new evidence instead comes from an actual flyby of Europa by the Galileo mission in 1997 – significantly strengthening the evidence that there are plumes on the moon.

We don’t know exactly how thick Europa’s ice shell is or how deep its subsurface ocean is. A 2011 study showed that there are locations where water may be relatively close to the surface in great lakes, near chopped up icy “chaos regions”, which are similar to some Antarctic structures on Earth.

The Cassini mission to Saturn discovered huge plumes of water coming from the small moon Enceladus. The first hints were from magnetic field deflections and an abundance of charged particles in a certain region of the moon. We know that the dense gas of newly emerged molecules and atoms in a watery plume becomes charged (ionised) as electrons are knocked off. This makes it electrically conducting, causing changes to surrounding magnetic fields.

Next, the plumes were actually spotted in spectacular images, emanating from what looks like tiger stripes near the south pole. There is evidence from gravity measurements that the source is a subsurface ocean.

Cassini flew past Enceladus 22 times, enabling exploration of the plumes ejected directly from the ocean below. As well as simple water, ions and charged grains in the plumes, Cassini found sodium – a sign that the ocean is salty. It also found silicates, which indicate a sandy ocean floor and potentially the existence of hydrothermal vents.

This is important as chemical reactions between sand and water can provide enough energy in the water to feed microbial life (and tends to happen near hydrothermal vents on Earth). Finally, in 2107, Cassini also discovered hydrogen in the plumes, which should be a byproduct of such water-sand reactions. This is as close as you can get to a proof that it is a suitable candidate to host life.

Following these exciting discoveries, the hunt was on for plumes at Europa. Based on the Hubble measurements, estimates in 2012 showed that the amount of water released in the Europa plumes could be a factor 30 times that of Enceladus. The plumes appeared to have a height of some 200km. Like Enceladus, the floor of Europa’s ocean is likely in contact with sand and rock. This is in contrast to some other moons with subsurface oceans – including Ganymede and Callisto – where the ocean floor is ice.

In the new study, magnetometer data from a Galileo flyby less than 400km above Europa’s icy surface was reexamined and compared with a modern computer model of how charged gas on Europa should behave. The results – based on an observed deflection and decrease in the observed magnetic field over a distance of 1,000km – imply that there’s a dense region of charged particles. This is very likely to be the result of a plume, making it the best direct evidence for such an occurence yet.

As with Enceladus, the Europa plumes offer the tantalising prospect of directly sampling material from the subsurface ocean. Two future missions will be able to explore this. The European Space Agency’s JUICE mission, which I am involved in developing, is due to launch in 2022 and will arrive in the Jupiter system on 2030. Two close flybys of Europa are planned as part of a sequence, before going into orbit around the moon Ganymede in 2032.

NASA’s Europa Clipper will perform 45 flybys of Europa. Both these missions can explore the plumes in the same way the Cassini orbiter did at Enceladus. Following these, landers or penetrators at Europa have been proposed (but yet to secure funding). In the meantime, sampling the plumes could provide many exciting insights into what’s going on in the ocean. If we are really lucky we may even be able to detect signatures of biological activity. Unfortunately, Cassini was not equipped to look for such signatures at Enceladus. 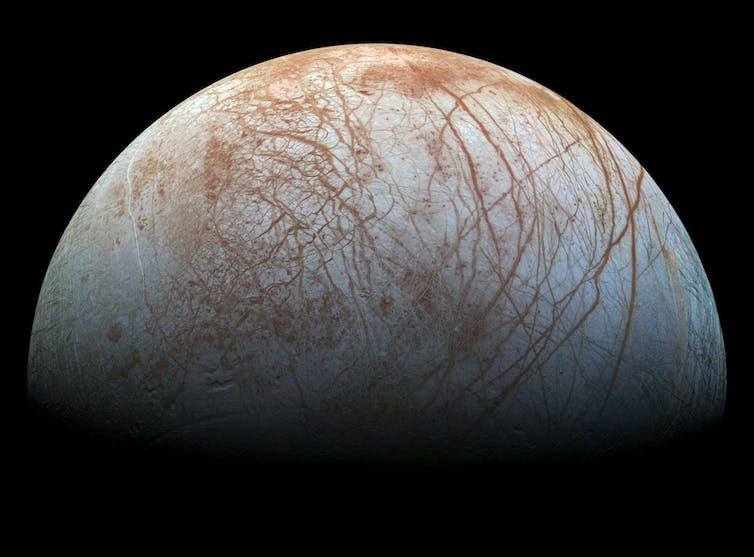 This means there are now four likely locations for life beyond Earth in our solar systems. First Mars, where conditions were right for life to form 3.8bn years ago. We will explore this further with the ExoMars 2020 rover, which I am also involved in developing. This will be able to drill up to two metres underneath the surface to search for biomarkers, as well as the NASA Mars 2020 rover and the related helicopter recently announced.

But on Europa and Enceladus there could actually be life now, and sampling the plumes will help reveal whether this is the case. At Saturn’s moon Titan, we have also found signs of complex prebiotic chemistry that once gave rise to life on Earth. This means it is a location for future or perhaps current life.

As well as the planned missions to Mars and Europa, it is therefore also important that we also return to the Saturn system to track down where there may be life elsewhere. NASA’s Dragonfly quadcopter proposed for Titan is one possibility.

With so many promising candidates for life in our own solar system, it is exciting to think that it could be just a few years until we discover some form of microbial alien life.