It can often be tempting to jump on a bus for a short journey through the city, especially when it’s raining or you’re running behind schedule. Where there are dedicated bus lanes in place, it can feel as though you speed past gridlocked traffic. But as city authorities begin new initiatives to get people walking or cycling, that could all change – and so could you.

British people are wasting tens of hours in traffic every year: London comes top, with the average commuter spending 74 hours in traffic, followed by Manchester, with 39 hours and Birmingham and Lincoln, both with 36 hours.

It might surprise some people to learn that cities are intentionally slowing down private vehicles, in order to shift people to other, more efficient, modes of transport. In fact, Transport for London removed 30 per cent of the road capacity for private vehicles in central London between 1996 and 2010. That trend continues today, as the organisation gives over more space for buses, cyclists and pedestrians. 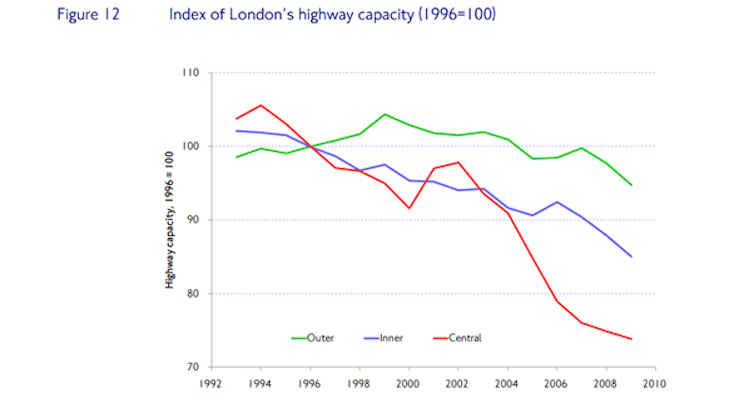 Clamp down on cars

The loss of road capacity for cars has occurred across most UK cities, but not on the same scale everywhere. The good news is that the changes, when made, appear to have reduced actual car congestion. It seems that by making it less attractive to use your car, you’ll be more likely to use other transport. In fact, the average speed of buses and cyclists can be up to twice as fast as normal traffic in cities such as London.

The relationship between walking and improved health has been proven to such an extent that it seems everyone – your doctor, your family, regional and national government – wants to increase physical activity. The savings in health care costs, are via improved fitness, reduced pollution and improved mental health, and its impact on social care are huge.

For instance, Greater Manchester wants to increase the number of people who get the recommended level of exercise (only about half currently do). The most advanced of these plans is London’s, which has the specific goal of increasing the number of walks people take by a million per day.

So, the reality is that over the next few years, walking will gradually appear more and more “normal” as we are purposefully nudged towards abandoning our rather unhealthy, sedentary lifestyles.

Consider this: the typical bus journey in the UK is almost three miles, with an average journey time of around 23 minutes. The equivalent walk would take approximately 52 minutes, travelling at just over three miles per hour. It seems obvious that the bus is much faster – but there’s much more to consider.

People normally walk at least a quarter of a mile to and from the bus stop – that’s roughly ten minutes. Then, they have to wait for a bus (let’s say five minutes), account for the risk of delay (another five minutes) and recover from the other unpleasant aspects of bus travel, such as overcrowding.

This means that our 23 minute bus journey actually takes 43 minutes of our time; not that much less than the 52 minutes it would have taken to walk. When you think of the journey in this holistic way, it means you should probably walk if the journey is less than 2.2 miles. You might even choose to walk further, depending on how much value you place on your health, well-being and longevity – and of course how much you dislike the more unpleasant aspects of bus travel.

The real toss up between walking and getting the bus is not really about how long it takes. It’s about how we change the behaviour and perceptions we have been conditioned to hold throughout our lives; how we, as individuals, engage with the real impacts that our travel decisions have on our longevity and health. As recent converts to walking, we recommend that you give it a go for a month, and see how it changes your outlook.