For Chris Falchi-Stead, it began with a phone call. The sales and operations director at the Big Issue, a magazine sold by people experiencing homelessness and others living in poverty, received the call in March from Lord John Bird, the magazine’s founder, who now sits in the UK Parliament’s upper house. 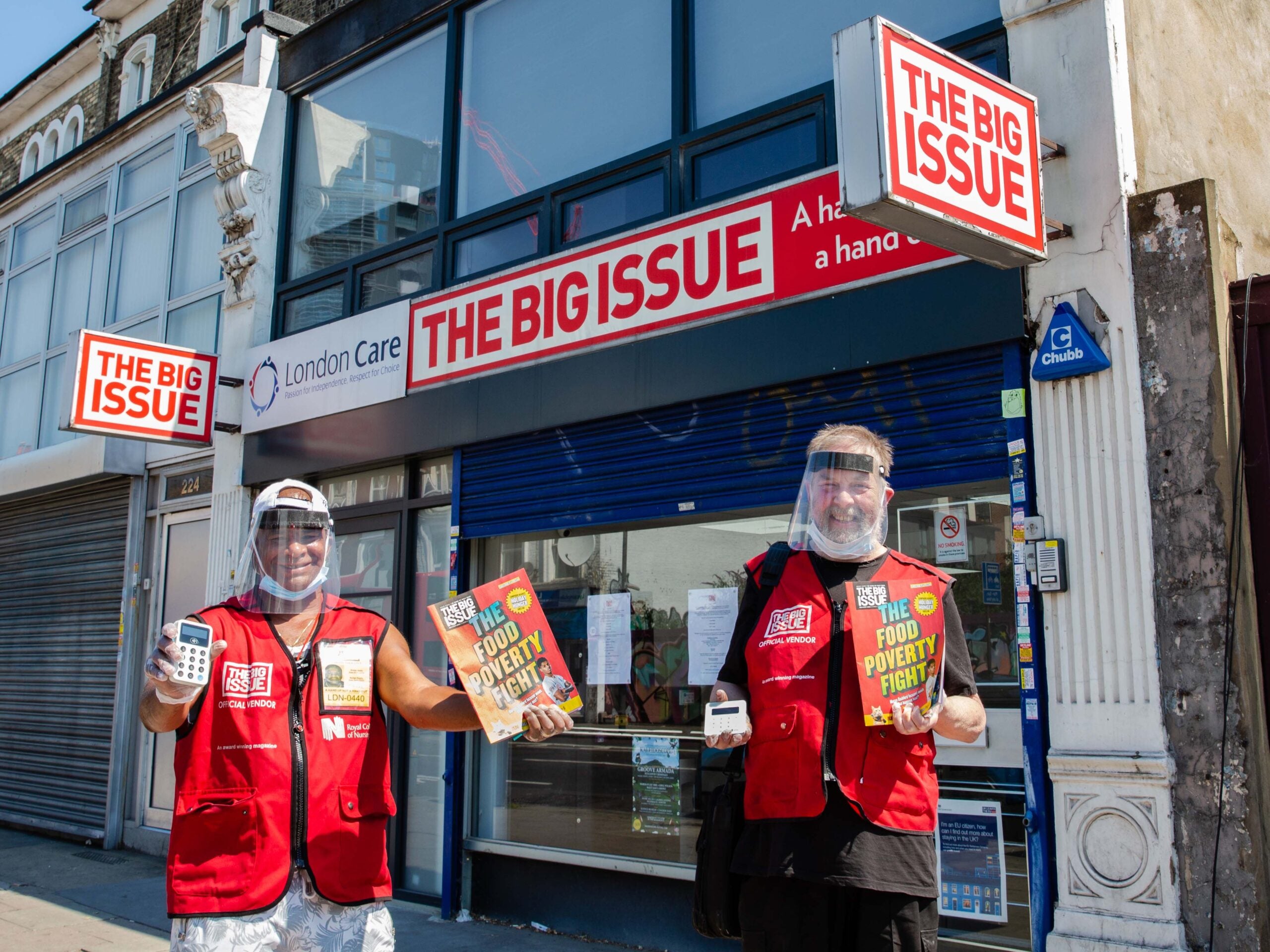 With card readers offering a more contactless means of payment, Big Issue vendors are again able to sell the paper to passers-by. (Photo by Louise Haywood-Schiefer)

“I don’t often speak to John now because of all his parliamentary work,” explains Falchi-Stead. “He said a lockdown was coming and that we would cease production of the magazine, which was something we’d never done before.”

Falchi-Stead and his team contacted the magazine’s vendors to tell them to self-isolate. They tailored the support offered to vendors, ranging from supermarket vouchers to supplying televisions or kitchen utensils, spending £600,000 ($781,320) to help them through the initial lockdown.

“We went from being a ‘hand-up, not a handout’ – where vendors buy the magazine upfront and sell it on the streets – to, quite rightly, being a straight handout,” says Falchi-Stead. Weekly calls to vendors identified two pressing matters.

One was obviously financial, as the vast majority of vendors rely on sales almost completely for their income. But there was also concern regarding mental health and loneliness. As Falchi-Stead explains, “many of our vendors enjoy selling the magazine because they have regular interactions with their customers. To have that taken away had a devastating impact on their mental health, especially because a lot of our vendors were moved into hotel rooms as temporary accommodation during the lockdown.”

‘Time on your hands’

Loneliness and other mental health issues were also a concern for Zakia Moulaoui Guery, founder of Invisible Cities, a social enterprise in the UK that trains people who have experienced homelessness to become tour guides. The organisation was launched in Edinburgh in 2016 and expanded into Glasgow and Manchester in 2018, followed by York last year, with its arrival in Cardiff this year delayed by the pandemic.

Guery says that the most important objective was to make sure their guides were safe, were housed and had access to food. The group ran a crowdfunding campaign at the very start of lockdown to help supply them with sustenance.

“The biggest thing I’ve noticed is how hard people were hit with their mental health,” says Guery. “If you have a history of addiction and all of a sudden you have this time on your hands when you’re not working, then you’re thinking about drinking or not drinking.

“Our guides were really relieved when we could start meeting up again and have that engagement rather than being stuck in the one place. Demand for our tours is lower now than they would normally be, and we’re limiting numbers to encourage social distancing, but we’ve kept them running.”

During lockdown, the guides created content for children that was posted online, including quizzes and word searches. Guery has taken those ideas and produced subscription boxes, which families can order on the internet if they’re unable to visit a city. For each box sold, Invisible Cities also provides books, toys and activity packs for families in temporary accommodation.

“The guides record audio stories for those boxes,” she explains. “Selling those boxes means we’ll have money to help support our guides and trainees if another lockdown happens.”

In California, Kris Kepler, chief executive officer at LavaMaeX, has also put keeping in touch with unhoused guests at the heart of her organisation’s mission during the pandemic. Before the virus struck, LavaMaeX was providing mobile showers and pop-up care villages – offering services ranging from haircuts to legal advice – in Los Angeles, Oakland and San Francisco. The organisation has also trained, advised or inspired more than 200 similar programmes in 170 communities across 12 countries.

When Covid forced the group to temporarily halt its showers, Kepler and her team asked their unhoused guests what they required. As well as essentials such as food and shelter, they needed water; many of the places where they would normally access it – such as libraries, fast food outlets and public toilets within parks – were closed by the pandemic. 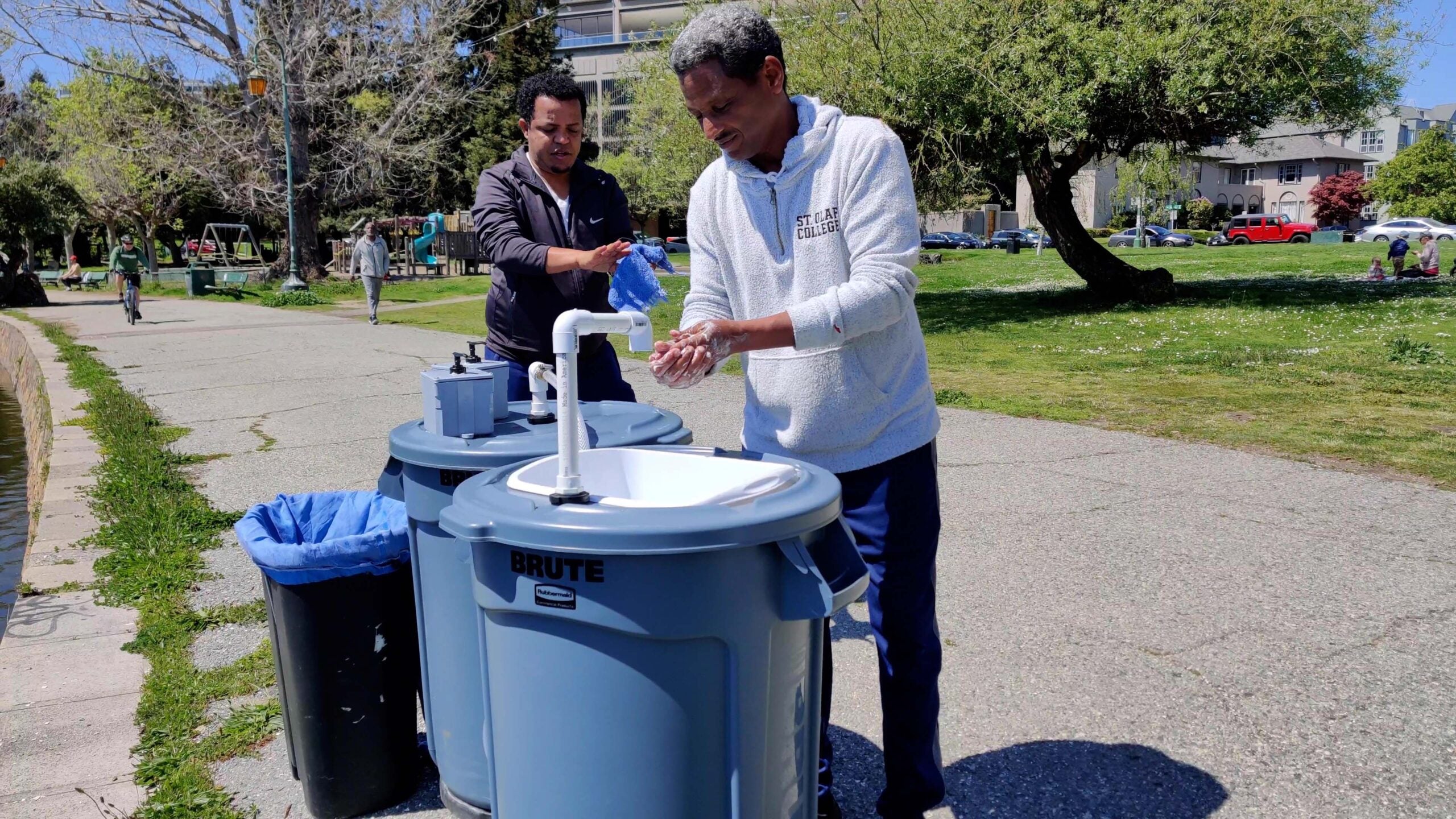 Though the non-profit LavaMaeX has had to suspend its mobile shower service for people experiencing homelessness, it is providing mobile handwashing stations throughout California. (Photo courtesy LavaMaeX)

So LavaMaeX created a build-it-yourself handwashing station, inspired by students at the University of Southern California’s Annenberg School for Communication, in partnership with the Los Angeles Community Action Network. The organisation has deployed 15 of its own handwashing stations in California and shared its design to help its partners install more than 450 units in 12 communities.

“One really great example of a partner that took the idea and really ran with it is Red Feather Development Group in Flagstaff, Arizona,” says Kepler. “They serve the Hopi and Navajo nations and have created units for those who live on Native American reservations who don’t have running water.

LavaMaeX has also distributed more than 6,000 hygiene kits across Californian during the pandemic. Having updated its protocols and bought personal protective equipment (PPE), the organisation will be relaunching shower services one day a week in Los Angeles and San Francisco within the next month.

Returning to the streets

Big Issue sellers returned to the streets on 6 July, with the organisation providing free PPE and hand gel for its vendors. One of its more eye-catching steps was introducing credit and debit card readers for vendors.

“Cash was declining before Covid, but that’s now accelerated,” Falchi-Stead says. “Vendors with card readers are reporting they’re selling more now than they did before having card readers. It’s difficult, though – there’s still stigma around vendors’ accepting card payments, so we’re trying to break down that with the public, but on the whole, it’s been a huge success.”

Falchi-Stead is still concerned about the massive decline in footfall in city centres, with workers across the UK again being told to work from home if they can. “It’s been difficult in city centres, and I can’t see that changing anytime soon,” he says.

While charities and other organisations tackle shortcomings in government responses to the pandemic, campaigners continue to highlight the need for officials to develop systemic solutions to homelessness. For now, they are stepping in where those official institutions aren’t.

Peter Ranscombe is a freelance journalist based in Edinburgh.