The impact of non-communicable diseases on the world population’s health is growing. Non-communicable diseases are those that are not directly transmissible from one person to another. By 2030, scientists predict they will account for 77% of the global burden of disease. Cardiovascular or heart disease is the most common type, responsible for 44% of all deaths related to this category.

New research from the University Medical Centre in Mainz, Germany, explores how urbanisation exacerbates the risks of such diseases. Young people are increasingly concentrated in the world’s cities. Their future health is at risk. Can city planning can be harnessed to protect their health? 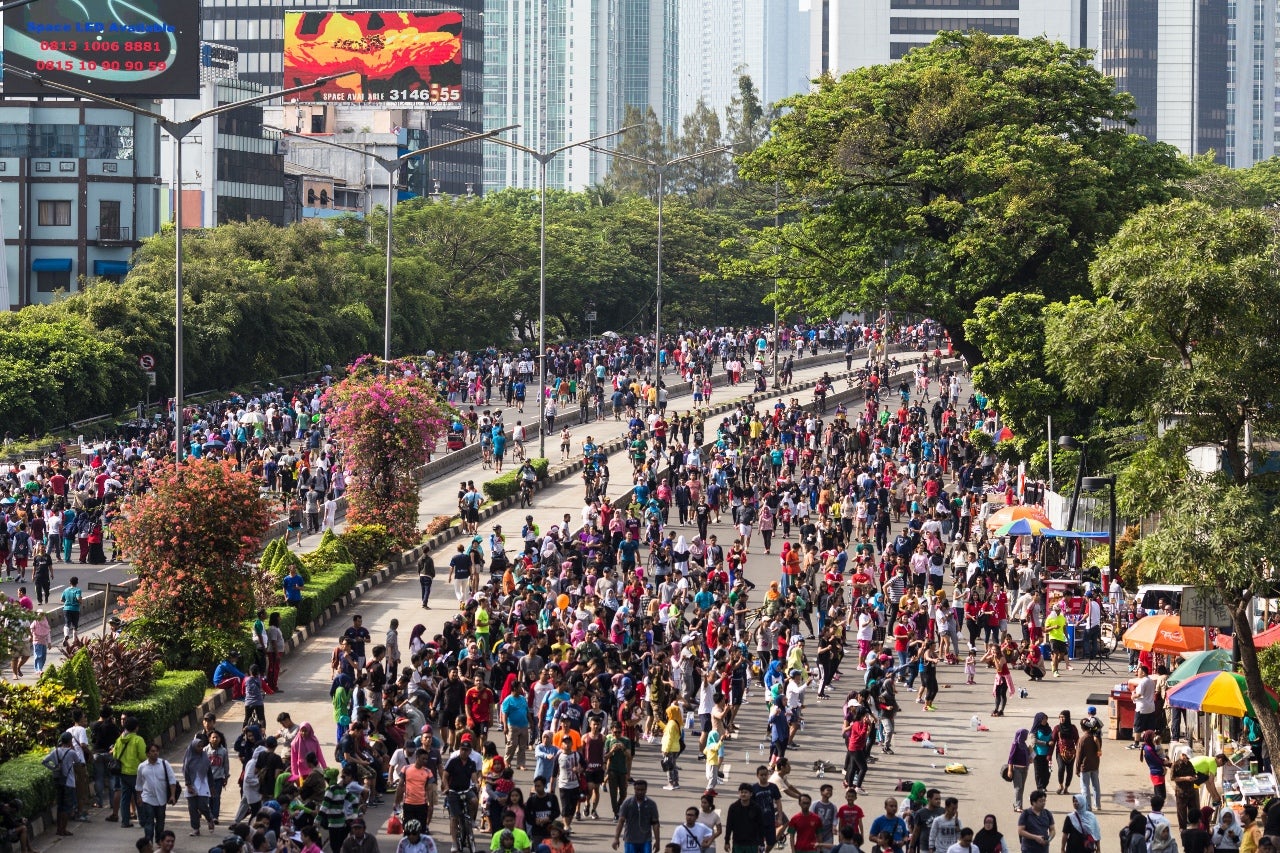 A huge crowd attends the car free day along Sudirman street in the heart of Jakarta business district. The event, hold every Sunday, to fight pollution. (Asia travel/Shutterstock)

The Mainz study synthesises the existing evidence on the impact of several urban environmental risks. These include air pollution (over half of the global deaths from air pollution are due to cardiovascular disease); transport noise (which contributes to the risk of metabolic disease by raising stress hormones levels, heart rate, and blood pressure); and light pollution at night (associated with changes to the circadian rhythm, which is linked to conditions including obesity and heart disease).

The study then highlights how human health and climate change are linked, and what can be done to help. Urban infrastructure is destroyed and populations harmed by the effects of extreme weather, floods and heat stress.

Scholars speak about this enmeshing of human health and the wellbeing of the natural systems on which we depend as planetary health. Increasingly, this is seen as a guiding principle that should drive all urban policies.

It follows that we need better designs for our cities. Research has shown, for instance, that 20% of all deaths could be prevented if cities were designed to meet the recommendations for physical activity, air pollution, noise, heat and green space.

The Mainz authors have identified four urban models that can be described as healthy. The first is the compact city: high-density, with direct public transport and bountiful green space. Melbourne is currently being transformed along these lines.

The second model is the superblock city. Here, blocks are bounded by arterial roads, within which pedestrians and cyclists have priority and residential traffic only is permitted, with a maximum speed limit. In Barcelona, urban planning in this way is estimated to prevent almost 700 premature deaths every year from air pollution, road traffic noise and heat.

The 15-minute city, meanwhile, has recently regained popularity as a means of rebuilding in the wake of the pandemic. Here, the idea –– to which Anne Hidalgo, the mayor of Paris, pegged her 2020 re-election campaign –– is that all residents be able to easily fulfil their essential needs (grocery shopping, the school run) within a 15-minute walk or bike ride from their home.

Lastly, the car-free city model, of which the Vauban neighbourhood of Freiburg in Germany is a successful example, reduces unnecessary, private traffic and provides easy access to active and public transportation.

All four models are designed to promote active transportation and to minimise car use. This in turn reduces air pollution, noise and heat and increases physical activity which improves heart health.

While laudable, these models don’t take into consideration the urban sprawl that characterises the cities growing the most rapidly across the globe. Without due consideration of the historical and colonial contexts of spatial segregation, as in, say, South Africa’s urban centres, the 15-minute city could inadvertently exacerbate spatial inequity.

Similarly, the informal ways in which residents in these cities appropriate the built environment require different approaches to promote active living. In Indonesia, Colombia, Rwanda and Nigeria, to name a few, people are increasingly implementing temporary programmes – such as car-free days – to promote active living. These creative initiatives are crucial, as is robustly investigating the health benefits they bring.

Things like air pollution, green space and housing are obviously all interconnected. Thinking about them as contributing in different, interlinked ways to our urban exposures can help to understand how, together, they cause ill health, and how socio-economic status influences the extent of their impact.

The study identifies several knowledge gaps, including the need for better measures for assessing environmental exposures and for greater citizen participation to ensure such assessments reflect people’s actual lived experiences. Crucially, however, it fails to address the fact that existing models are western-centric.

The urbanisation taking place across Asia and Africa is very different to that underpinning cities in Europe and North America. A 2014 study on built environmental factors and physical activity among adolescents in Nigeria, for example, showed that active travel – walking and cycling – by girls and women was frowned upon. Recommendations should therefore take specific cultural and social norms into account, to avoid widening health and social inequalities.

Ultimately, whether it’s our transport, our energy sources or our housing options, there is an urgent need to consider all the urban factors that impact our wellbeing. Doing so would position urban designers and planners as de facto health professionals, with the attendant responsibility to protect human and planetary health.

PhD researcher in behavioural epidemiology and urban health, University of Cambridge.
Websites in our network