Ten years ago, Manchester became the first UK city to sign up to the WHO’s Global Network of Age-Friendly Cities and Communities, an international initiative that challenges urban planners to design senior-friendly cities for the two billion people that will be 60 years or older by 2050. 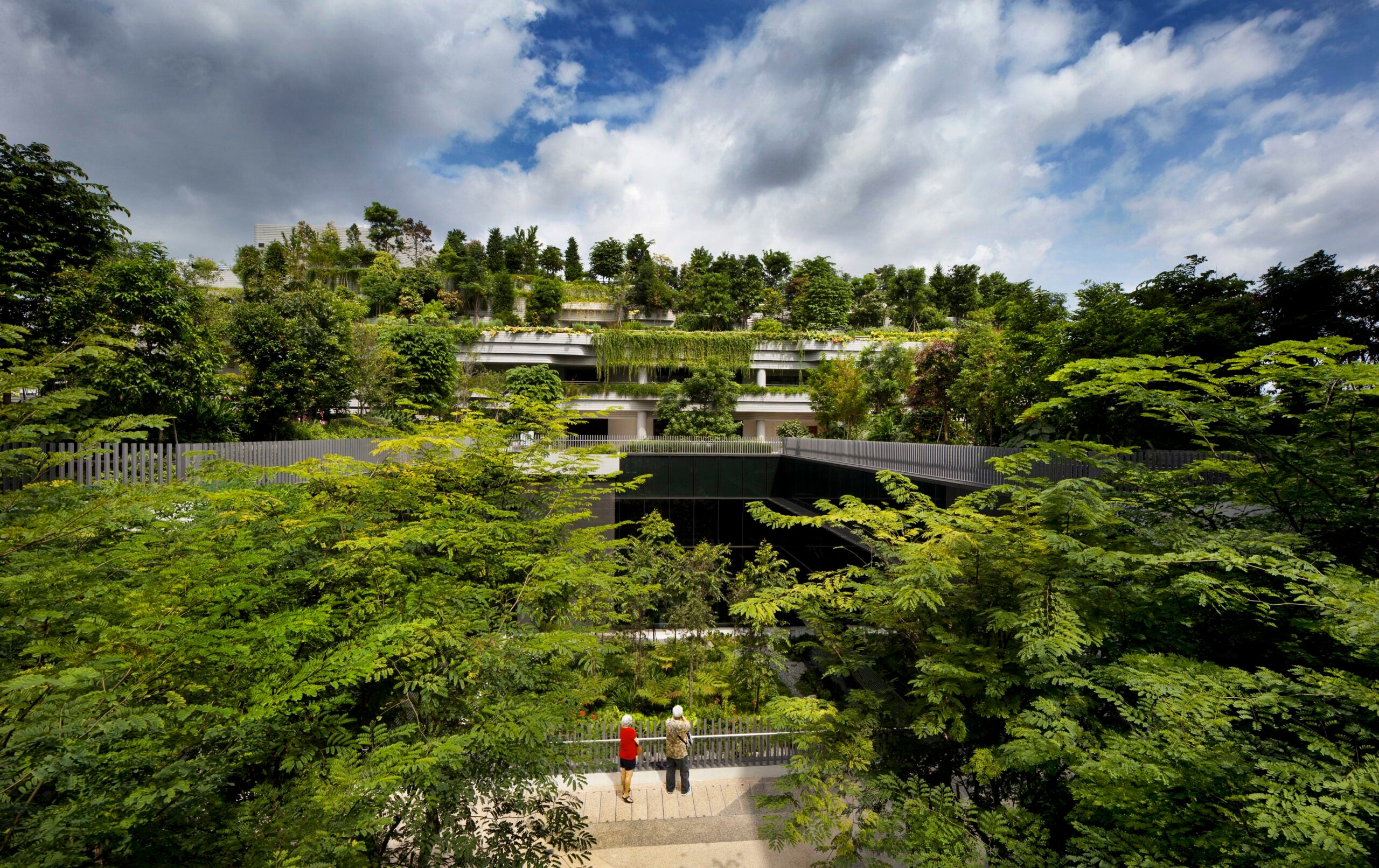 In Singapore, where around 12% of the population is 65 or older, the first multi-generational development opened in 2018. The project is a model for Manchester. (Photo by Patrick Bingham)

By 2040, around a third of Greater Manchester’s own population will be 50 or older, an increase of 21% from today – and it is a demographic shift to which authorities, NGOs and grassroots organisations have been responding diligently for the past decade.

From designating the Old Moat neighbourhood, a blueprint for urban planning for seniors, to creating an age-friendly design guide for the corporate-development sector, to appointing cultural champions tasked with engaging older people in Manchester’s vibrant arts scene, the region has been a fulcrum of activity. In August, the city was shortlisted for a £40m ($52m) injection from UK Research & Innovation, a government body, to take what Paul McGarry, head of the Greater Manchester Ageing Hub, describes as an “ambitious and aspirational” concept even further. He and his team communicate and learn from cities all over the world. McGarry has visited programmes in the US and has worked on a new European collaborative report combining work across Oslo, Amsterdam and Barcelona.

But arguably nowhere has provided quite the insight into how age-friendly cities in the UK might shape up as the high-rise-packed metropolises of Asia. Nowhere else is the concept of planning for seniors so inherent. “No region will be more impacted by population ageing than Asia,” says Khoo Teng Chye, executive director at Singapore’s Centre for Liveable Cities. “The next few years present an opportunity for countries to invest towards and adapt to future needs before an exponential growth in population ageing takes place.”

Close to half a billion people across Asia-Pacific will be 65 years or older in only five years. By 2030, the region will be home to 60% of the world’s over-65s. And while that brings big economic opportunities – those 65+ will be the region’s largest and fastest-growing market – it also brings numerous challenges. It’s thought that meeting the healthcare needs of this ageing population could cost Asia $20trn between 2015 and 2030. And by 2037, the Organisation for Economic Co-operation and Development estimates that just under 4% of Japan’s population will be suffering from dementia.

Precious few other regions have embraced the elderly-friendly concept with quite the same urgency as Asia, providing endless food for thought for the likes of Manchester, 7,000 miles away.

Take, for example, Akita, a small city on the north-west coast of Japan. In 2011, it became the first in Asia to sign up to the WHO’s newly launched network, one of only a handful at the time. A decade later, it has rallied private and public institutions to create new skills and employment opportunities for those 65 and over, set up inter-generational social networks where the young are paired with the old, and introduced a “one-coin” (100 yen, or $0.95) transport network to allow those 65+ to get around more easily. In 2016, it even opened a purpose-built, multi-generational city hall equipped with free walking aids, stick holders in waiting areas and heated pathways to avoid accidents during Japan’s icy winters. 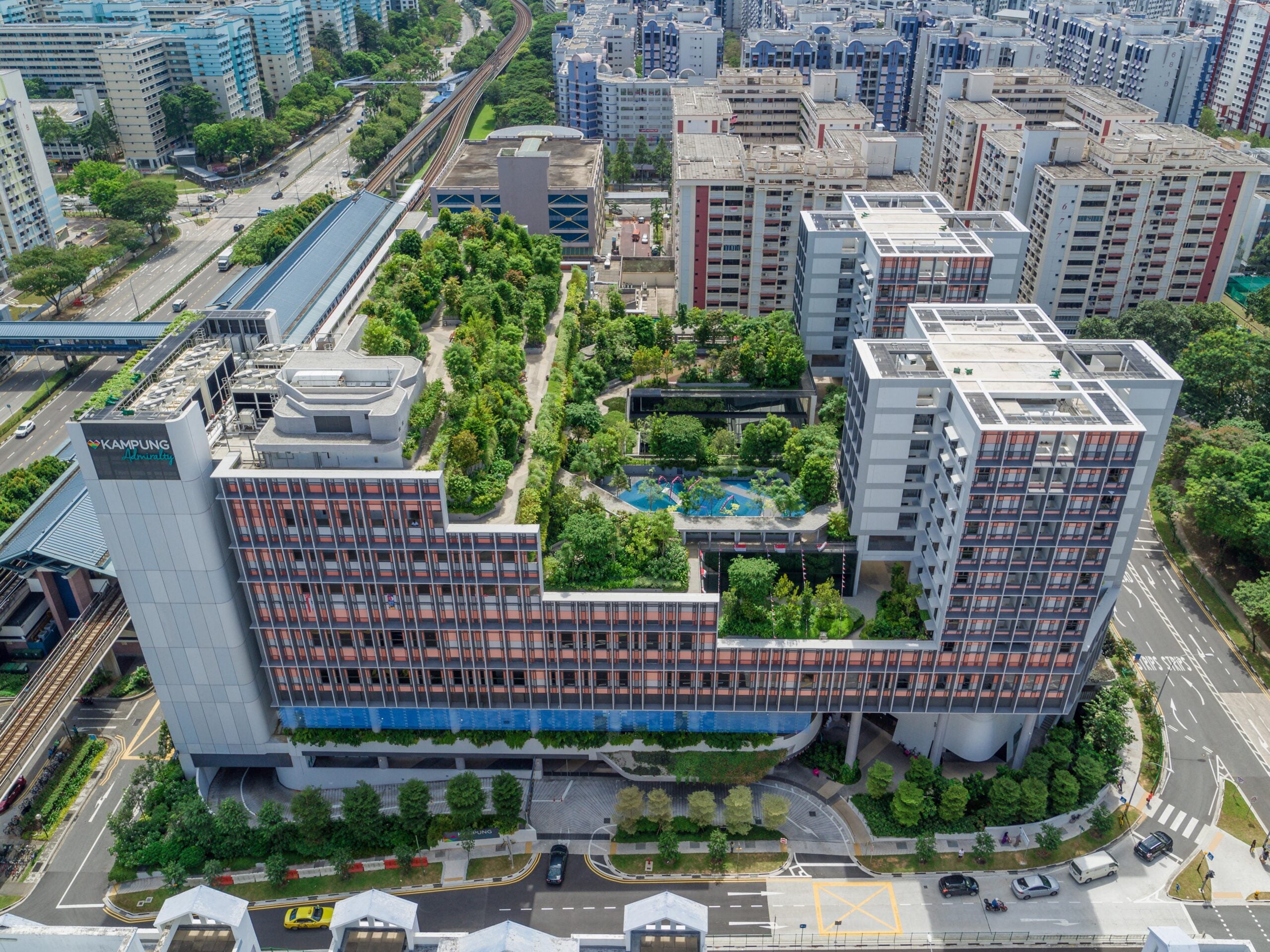 Singapore’s 11-storey Admiralty is just a few minutes’ walk from a metro station and integrates a market, medical centre and 100 units designed for older occupants. (Photo by K. Kopter)

In Singapore, where around 12% of the population is 65 or older, the first age-friendly vertical kampong, or village, was unveiled in 2018. The 11-storey Admiralty sits a few minutes’ walk from a metro station and integrates 100 units designed for older occupants (equipped with slip-proof floors, grab bars and inbuilt alarms to notify neighbours in an emergency), with a medical centre, supermarket, food court and green spaces all under one roof. There are even “buddy benches” installed at the entrance of each unit to encourage residents to chat. It is, according to authorities, the first example of multi-generational development in the city-state.

The emblematic project was designed to address some of the biggest challenges of building cities that take the needs of the elderly seriously, explains Janice Chia, founder and managing director of Ageing Asia. “When an older person is living alone, how connected are they to the local community? Are shops within a walking distance? Are there people they connect with on a daily basis? Are there activity centres or opportunities for work close by?”

Though currently in the “deep planning stages,” another Singaporean project aims to respond to many of these needs on an even grander scale, says Mary-Ann Tsao, chair and founding director of the Tsao Foundation, a nonprofit dedicated to longevity and ageing. Authorities have already purchased land for a new “city within a city” designed entirely for the needs of an ageing population, she explains. “It’s the first large-scale experiment to fit everything into one space. There’ll be community services for each level of frailty, adapted housing and transport, and work opportunities for older people. It’s a bold effort to get different ministries working together.”

Urban planning for ageing populations isn’t only about physical needs, according to Kathleen Brasher, a member of the WHO network’s strategic advisory group. “This [movement] includes people with significant cognitive decline. [For them] it’s about saying, ‘The world around you can help – you don’t have to do this alone, you don’t have to become even further disadvantaged,’ if we create environments where ageing in older people is respected, included and thought about in urban planning.”

Around 10% of those 60 and older in Singapore are already estimated to be living with dementia, says Khoo. The Centre for Liveable Cities is working alongside other government agencies to create “dementia-friendly” neighbourhoods, in addition to the six Dementia Friendly Communities already up and running in the city-state. In these areas, people working in retail, hospitality and other service industries are given training on how to better serve and adapt their services for those with dementia. For instance, at a coffee shop in Bishan, there are decals explaining dementia, and stallholders have been trained to recognise the illness and its manifestations. In Japan and Taiwan, too, there are similar initiatives, with bank and retail staff trained to tailor their services to older people.

Not all progress in this area has centred on large-scale, top-down policies, either. Much has also come from smaller, grassroots projects. At a high-rise, government-owned estate in Seoul, South Korea, where 26% of the 851 occupants are 65 and over, developers have experimented with the creation of outdoor spaces designed to trigger memories and cater to those residents with cognitive decline. These spaces include a “memory lane” – a 220m walkway painted green to prevent people from getting lost, bumps painted yellow to prevent falling accidents and a bench placed every 100m so residents can rest.

As a result of the project, the property’s owners noted a 16% increase in older people venturing outside several times per day, and the number using the outdoor areas to meet friends went from 49.1% to 69.8%. “[It] proved that the project promoted outdoor activities for cognitively impaired residents,” says Hyun-Chan Ahn, associate research fellow at The Seoul Institute. But the majority of housing in the city is privately owned, he points out, “with most private-housing owners yet to introduce the design.” This kind of work is often limited to public housing and low-rise, less affluent neighbourhoods.

A few large high-profile projects doesn’t translate into a solution. Getting cities to truly consider the needs of the ageing population, whether in Asia, the UK or elsewhere – will require something notably less concrete, Tsao believes. Attitudes must change for policies to follow suit. “Age-friendly cities aren’t just physical but concern the mental and social space for older people to be engaged and active,” she says. “If you tell older people, ‘You’re not productive; it’s safer just to stay home’ – and enough older people buy into that – they’ll stop being engaged with activities and stop living how they want to live. They want to be independent, take care of themselves and contribute.

“The most important thing that needs to change is that awareness and understanding that older people are a part of our community and they’re just as valuable.”

It’s a view shared by the likes of McGarry. It’s why in February, the Greater Manchester Ageing Hub published a 72-page report on what it calls the “longevity dividend” – a look at the £500bn spent each year by consumers 50 years and older as an incentive to the private sector to create innovative and more-inclusive solutions.

“We [often] see older people through the lens of being a burden on the system or not contributing financially,” Brasher says. “But of course they’re consumers – they pay into the economy in all sorts of ways as well as by their labour.

“Let’s look at the world through the lens of ageing. If we do that, we’ll support everyone.”

Megan Tatum is a freelance journalist based in Penang, Malaysia, covering innovation across health, tech and business.