The UK’s Labour Party has pledged to offer voters a Green New Deal at the next election. This is a radical programme for decarbonising society and the economy by 2030, through phasing out fossil fuels, investing in renewable energy and creating a public works programme to build the zero-carbon infrastructure of the future.

In my recent report, A Green New Deal for Nature, I argued that giving land back to nature could be another part of this vision. Restoring forests and other natural habitats to 25 per cent of the UK’s land surface could sequester 14 per cent of the UK’s annual greenhouse gas emissions each year. As emissions are scaled down and these ecosystems expand, they could continue to remove much greater quantities of carbon dioxide (CO₂) in future.

Often called “natural climate solutions”, restoring forests and wetlands draws carbon down from the atmosphere and stores it in the tissue of new vegetation and soil. On a large scale, and alongside leaving fossil fuels in the ground, this could help to limit global heating to well below 2°C. 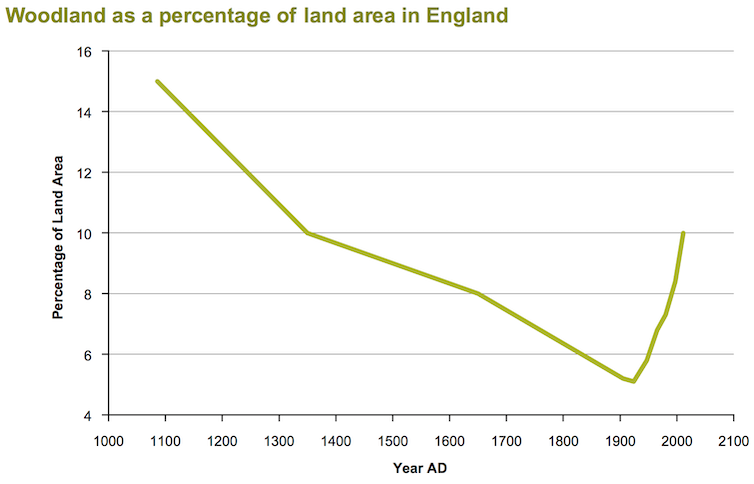 The Domesday Book of 1086 indicated forest cover of 15 per cent, but significant loss of woodland started over 4,000 years ago in prehistory. By the beginning of the 20th century, this had dropped to 5 per cent. Image: Defra.

These habitats can be restored through rewilding, which means giving natural processes a helping hand by stopping the draining of peatland for example, or letting a woodland regrow. Reintroducing species that were once extinct in a region can also help ecosystems regenerate. While letting nature take care of itself isn’t appropriate in all cases, rewilding is one of the most powerful and cost-effective ways to resist climate breakdown and wildlife loss at the same time.

The “green” in the Green New Deal

For wildlife, it’s important that restored habitats are connected. Linked habitats allow plants and animals to move more easily as temperatures rise and rainfall patterns change. If species can migrate through green corridors to cooler areas, they could avoid local extinctions. This could mean a network of expanded hedgerows and woodland that criss-crosses the land, connecting wild habitats and ensuring species can migrate safely between them.

Other changes include reintroducing European beavers to flood plains to help manage flood risks. In remote places like the Scottish Highlands, wolves could return to keep herbivores in check and help woodlands rebound, increasing their long-term potential to store carbon. Rewilding instead of burning or draining carbon-rich peatlands would allow their vegetation and carbon stocks to recover. Wildlife, from insects to birds and large mammals, would have space to flourish. The UK would switch from being one of the world’s most nature-depleted countries to a green and vibrant land.

This may sound utopian, but it’s not. The UK is a densely populated country, and with 72 per cent of the land area used for agriculture, it might seem that there’s little room for anything else. But less than 20 per cent of the UK is occupied by crops or dense urban communities, so 80 per cent of it could be better managed for nature and storing carbon.

Some 45 per cent of the UK’s land surface is given to grazing livestock. The poorest land for agricultural productivity is only farmed because of taxpayer subsidies. Meanwhile, about 13 per cent of the UK is allocated to grouse-shooting and deer-stalking, often on degraded peatlands that are managed at huge environmental cost for the benefit of a tiny number of hunters. This land is currently of little value for food production, but it could store plenty of carbon if rewilded.

How can it be done?

Farm subsidies currently give £3bn to UK farmers ever year. By some estimates, subsidies are half the income of many farmers. After Brexit, this money could be given to farmers to reward them for storing carbon and rewilding, making this more financially viable than grazing on agriculturally poor land.

Economy-wide carbon taxes could also pay for rewilding schemes, while the government could also issue green bonds to raise funds to lend to landowners, helping cover the early costs of restoring land to wild habitat.

Reducing the demand for farm produce from land will also be key to making space for nature. This means cutting down on the most inefficient use of land – farming for meat and dairy, which uses between four and 100 times the land area to produce a single gram of protein compared to beans, nuts and other plant sources. Policies which make it easier for everyone to eat food that’s healthy and sustainable – including less meat and dairy – are the final pieces of the puzzle.

Less climate change, more wildlife, and a longer life lived closer to nature. That’s a lot to gain from modest investments in how land is used in the UK.

Simon Lewis, Professor of Global Change Science at University of Leeds and, UCL.