“It has always been our ambition to get inside that white space, and now we are there the space can no longer be blank,” wrote the polar explorer Captain Scott, on crossing the 80th parallel of the Antarctic continent for the first time in 1902. Fast-forward more than a century – and the deep ocean floor around Antarctica still offers a “white space”, beyond the reach of scuba divers, only partially mapped in detail by sonar from ships and seldom surveyed by robotic vehicles.

So I jumped at the chance to join a team from the BBC on an expedition to the Antarctic Peninsula for Blue Planet II, to help them as a scientific guide. Thanks to the crew of the research ship Alucia, we dived in minisubmarines to 1km deep in the Antarctic for the first time. And while we didn’t face anything like the physical hardships endured by early polar explorers on land, those dives did give us the opportunity for some unique science.

The deep ocean around Antarctica is a special place for several reasons. Because Antarctica is pushed down by the weight of its ice sheets, the submerged continental shelf around it is deeper than usual, around 500-600m deep at its edge rather than 100-200m deep. It’s also cut by even deeper channels close inshore, some plunging more than 1km, scoured out by larger ice sheets in the past. So although the continent itself is remote, we can reach the deep ocean close inshore here – handy for us diving in minisubmarines, despite the need to dodge icebergs. 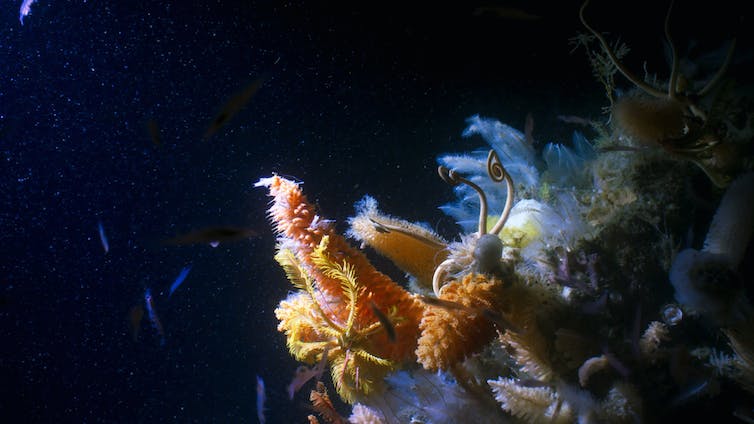 Giant sponges found in the deep waters of the Antarctic. Image: BBC NHU.

There’s a gateway to the deep for marine life here too. Some deep-sea animals come into much shallower depths than usual around Antarctica, because the water temperature near the surface is similar to the cold temperatures elsewhere in the deep ocean. And in the past, shallow-living ancestors of some deep-sea animals spread out across the deep oceans from the Antarctic, via this cold gateway between the shallows and the deep.

One of my favourite animals that we saw on dives was the octopus Graneledone antarctica, whose ancestor ventured down from the shallows around 15m years ago, when the water temperature at the surface cooled to the same chilly temperature as the deep. Her descendants then spread out across the abyss like wagon-train pioneers, giving rise to several different species of deep-sea octopus found around the world today. Some stayed behind, however, becoming the species that we saw.

The ocean around Antarctica is also the lungs of the deep. Much of the life-giving oxygen in deep waters across the world begins its journey from the atmosphere here. As seawater freezes around the white continent in winter, it leaves behind very cold and salty water that sinks and flows into the depths of the Atlantic, Indian and Pacific Oceans – even the deepest water in the ocean, at the bottom of the Marianas Trench 14,000km away, came from here. As this deep water flows out from the Antarctic, it carries oxygen, dissolved from the atmosphere at the surface. So the Antarctic is where the world’s deep oceans breathe in – and its waters are among the most oxygen-rich on our planet.

The #BluePlanet2 team were the first humans ever to dive to a depth of a thousand metres in Antarctica #EarthOnLocation by @jameshoneyborne pic.twitter.com/KlyWu0VcbQ

Another of my favourite animals from our dives takes advantage of those oxygen-rich waters: giant sea-spiders, with legspans up to 40cm across. Sea spiders lack a respiratory system, which usually limits their size, but can grow much larger in the oxygen-rich conditions here.

Diving in the Antarctic is also a journey back in time, to glimpse what ancient ocean ecosystems were once like. Fish dominate as predators in most marine ecosystems today, but few fish species can cope with the -1.5℃ conditions where we were diving. The “ice dragonfish”, Cryodraco antarcticus, is a notable exception, however, and another of my favourite animals – with antifreeze proteins that stop its blood from icing up. Its blood is also clear, without any of the oxygen-carrying haemoglobin that gives ours its red colour – in the cold waters, enough oxygen dissolves directly in the fluid of the fish’s blood to keep it alive.

But there are few fish with remarkable adaptations like the ice dragon, and so invertebrates have diversified to dominate as predators in the deep ocean here, just as they did throughout the oceans more than 350m years ago. A final favourite from our dives epitomises that: the Antarctic sunstar Labidiaster annulatus, which is a relative of the familiar five-armed starfish. Nicknamed “the Death Star” by those inside the subs who watched its behaviour, it has up to 50 arms and grows larger than a dinner plate. It uses those arms like fishing rods, holding them up off the seabed to snag passing krill, thanks to tiny pincers on its skin that snap shut when anything brushes past them. Unlike other starfish, Labidiaster can wave its arms to catch prey here because there are relatively few predatory fish to chew them off. 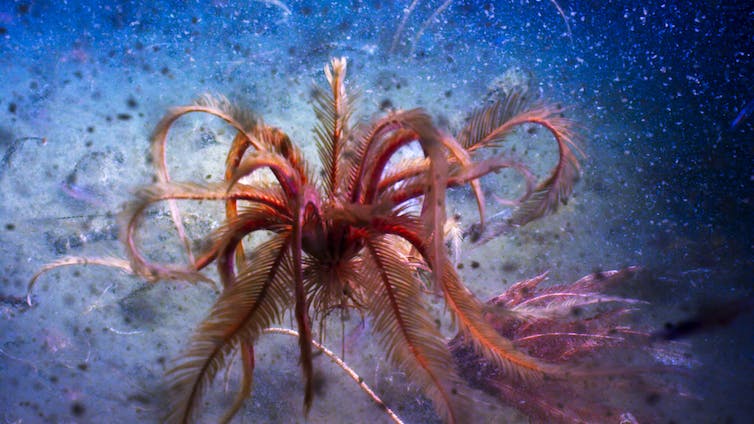 A feather star dances in the deep waters of the Antarctic Sound. Image: BBC NHU.

Overall, seeing the deep Antarctic sea floor close-up from our minisubs should help us to understand how “dropstones” shape the pattern of life here. “Dropstones” are car-sized boulders that fall from passing icebergs – they provide “islands” of rocky habitat for filter-feeding species which otherwise don’t get a look-in on the soft mud of the Antarctic seafloor. But where the dropstones settle depends on the undersea terrain. As we found on our dives, they slide down steeper undersea slopes, actually scraping off marine life. But if you’re at the bottom of a gully, then lots of dropstones end up there, giving a major boost to local biodiversity. That pattern of life is hard to see from samples collected by nets or trawls in the past, so our first minisub dives to 1km deep in the Antarctic should help to make that “white space” no longer such a blank.