Let us start, in the spirit of steampunk, by imagining a new and different past. One that is just a little different to that which we currently have.

So welcome to the year 1867. The Victorian age is at its zenith and a new, powerful and monied middle class is looking for things to do with their cash. Towns and cities seem to be growing bigger with each passing day, and horizons are transformed as new buildings appear everywhere.

One aspect of the urban landscape never changes though. Everywhere you look you will see one of the huge gasometers that have been a constant feature of the cityscape for almost 20 years now. They are filled with the hydrogen gas essential to run the fuel cells – or gas batteries, as the Victorians call them – that are so vital for the economy and for powering everyday life.

In both this imagined and the real past, the gas battery was invented in 1842 by a young Welshman from the then town of Swansea, William Robert Grove. It was a revolutionary device because rather than using expensive chemicals to produce electricity like ordinary batteries, it used common gases – oxygen and hydrogen – instead.

However in this timeline, unlike our own, within 20 years the Welsh man of science’s amazing invention had ushered in a new industrial and cultural revolution. 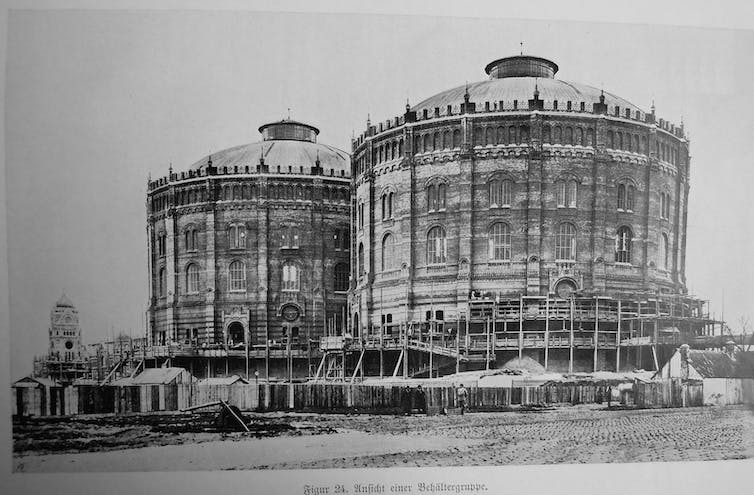 Our imagined scene is the British Empire’s new electrical age. The horseless carriages that run along roads and railways are all powered by electricity from banks of gas batteries. So is the machinery in the factories and cotton mills that produce the cheap goods which are the source of Britain’s growing wealth. The demand for coal to produce the hydrogen needed to run gas batteries has transformed places such as Grove’s own south Wales, where coalfields are expanded to meet the insatiable need for more power.

Middle-class homes are connected to those gasometers through networks of pipes supplying the hydrogen needed as fuel to run all kinds of handy electrical devices. Machines for washing clothes – and dishes – have trebled the workload of domestic servants by transforming their employers’ expectations concerning daily hygiene. There are machines for cleaning floors and furniture. Electric ovens are fast replacing the traditional kitchen range in the more fashionable houses. Gas batteries also run the magic lanterns that provide entertainment for middle-class families every evening after dinner.

Of course, none of this actually happened. The true history of energy, and the culture that depends on that energy, over the past 150 years or so has been rather different. It was coal and oil, rather than hydrogen, that powered the 19th and 20th-century economies.

The gas battery’s real history begins in October 1842, when Grove, newly appointed professor of experimental philosophy at the London Institution, penned a brief note to chemist and physicist Michael Faraday at the Royal Institution.

“I have just completed a curious voltaic pile which I think you would like to see,” he wrote. The instrument was “composed of alternate tubs of oxygen and hydrogen through each of which passes platina foil so as to dip into separate vessels of water acidulated with sulphuric acid.”

The effect, as Grove described it to Faraday, was startling: “With 60 of these alternations I get an unpleasant shock and decompose not only iodide of potassium but water so plainly that a continuous stream of thin bubbles ascends from each electrode”. Grove had invented a battery which turned hydrogen and oxygen into electricity and water. 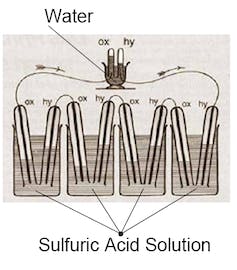 The technology described in Grove’s letter to Faraday. Image: Wikimedia/EERE.

In 1842 Grove was busily making a name for himself in metropolitan scientific circles. He had been born in 1811 into a leading family in the commercial and public life of Swansea, and grew up in a world where the importance and utility of science was commonly understood. The Groves’ neighbours included prominent industrialists including pottery manufacturer and botanist Lewis Weston Dillwyn and John Henry Vivian – an industrialist and politician – who were also fellows at the Royal Society.

Grove studied at Brasenose College Oxford before going to London to prepare for a career in the law. While there he became a member of the Royal Institution and it is clear that from around this time he started to become an active electrical experimenter.

This is when some of Grove’s earliest forays into scientific work began to appear. In 1838 he gave a lecture to the society describing a new battery he had invented: “an economical battery of Mr Grove’s invention, made of alternate plates of iron and thin wood, such as that used by hatters”.

This emphasis on economy was a theme that would recur in his work on the powerful nitric acid battery that he developed a year later – and which led to his aforementioned appointment as professor, and fellowship of the Royal Society – as well as in his work on the gas battery.

Grove described in a letter to Philosophical magazine how the battery “with proper arrangements liberates six cubic inches of mixed gases per minute, heats to a bright red seven inches of platinum wire 1/40th of an inch in diameter, burns with beautiful scintillations needles of a similar diameter, and affects proportionally the magnet”. This is typical of the way battery power was demonstrated. Scientists would show how it could break down water into its constituent gases, make wires glow, or work an electromagnet. 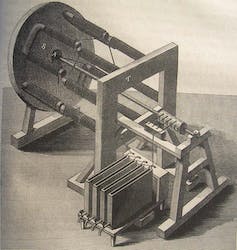 Significantly, Grove also went on to say that as “it seems probable that at no very distant period voltaic electricity may become a useful means of locomotion, the arrangement of batteries so as to produce the greatest power in the smallest space becomes important”. Indeed, shortly after Grove announced his invention, the German-born engineer Moritz Hermann von Jacobi used a bank of Grove’s batteries to power an electromagnetic motor boat on the river Neva in Saint Petersburg. And the technology later went on to be used extensively by the American telegraph industry.

It was Grove’s continuing work on making batteries more efficient and economic that led directly to the gas battery which was to be the forebear of the now modern fuel cell. He wanted to find out just what happened in the process of generating electricity from chemical reactions.

It showed how “gases, in combining and acquiring a liquid form, evolve sufficient force to decompose a similar liquid and cause it to acquire a gaseous form”. To Grove, this was “the most interesting effect of the battery; it exhibits such a beautiful instance of the correlation of natural forces”.

The gas battery provided powerful evidence in favour of the theory Grove had developed regarding the inter-relationship of forces, which he described a few years later in his essay, On the Correlation of Physical Forces. There he argued:

that the various imponderable agencies, or the affections of matter, which constitute the main objects of experimental physics, viz. heat, light, electricity, magnetism, chemical affinity, and motion, are all correlative, or have a reciprocal dependence. That neither taken abstractedly can be said to be the essential or proximate cause of the others, but that either may, as a force, produce or be convertible into the other, this heat may mediately or immediately produce electricity, electricity may produce heat; and so of the rest.

In other words, forces were interchangable and any one of them could be manipulated to generate the others.

But what about utility and practical power? Grove clearly believed, as did many of his contemporaries – including the electro-magnet’s inventor, William Sturgeon – that the future was electrical. It would not be long before electromagnetic engines like the one that Jacobi had used for his boat on the Neva would replace the steam engine. It was just a matter of finding the right and most economic way of producing electricity for the purpose.

As Grove put it to a meeting of the British Association for the Advancement of Science in 1866, if:

instead of employing manufactured products or educts, such as zinc and acids, we could realise as electricity the whole of the chemical force which is active in the combustion of cheap and abundant raw materials… we should obtain one of the greatest practical desiderata, and have at our command a mechanical power in every respect superior in its applicability to the steam-engine.

We are at present, far from seeing a practical mode of replacing that granary of force, the coal-fields; but we may with confidence rely on invention being in this case, as in others, born of necessity, when the necessity arises.

He was clear that realising this particular dream was not his problem, however: “It seems an over-refined sensibility to occupy ourselves with providing means for our descendants in the tenth generation to warm their dwellings or propel their locomotives”.

Grove certainly made no attempt to turn his gas battery into an economic device, but like many Victorians he was fond of looking into the future and putting his technologies there. In many ways it was Victorians such as Grove who invented the view of the future as a different country that we are so familiar with now. Their future was going to be a country full of new technologies – and electrical technologies in particular. 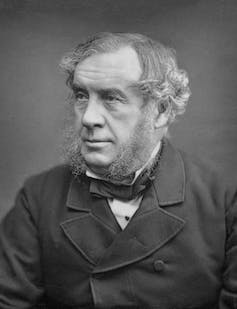 All this brings us neatly back to the new past for Grove and the gas battery that our future technologies may deliver. If the future of new and clean electrical technology – that contemporary promoters of the fuel cell are today offering us – really happens, then the obscure story about a curious little invention by a largely forgotten Welsh man of science will become an epic piece of technological history.

That future, if it happens, will change our past. It will change the ways we understand the history of Victorian technology and the ways in which the Victorians used those technologies to tell stories about their future selves. We should not forget that we still pattern our own projected futures in the same way as they did. We extrapolate bits of our contemporary technologies into the future in the same sort of way.

It is interesting to speculate in that case why particular sorts of technologies make for good futures and others apparently do not. At the end of the 19th century the gas battery clearly did not look like a good piece of future-making technology to many people. It does now.