In January, China’s wet markets became the world’s whipping boy when the now-infamous Huanan Seafood Market, in the central city of Wuhan, was declared the epicentre of the Covid-19 outbreak, which has since resulted in hundreds of thousands of deaths worldwide. While analysis in the Lancet medical journal suggests that some of the first people infected with the virus had no contact with the market, perceived wisdom from most of the world’s top infectious-disease experts dictates that the sprawling fresh-produce hub – which sold rare and exotic live animals alongside its standard aquatic offerings – at least facilitated its rapid spread. 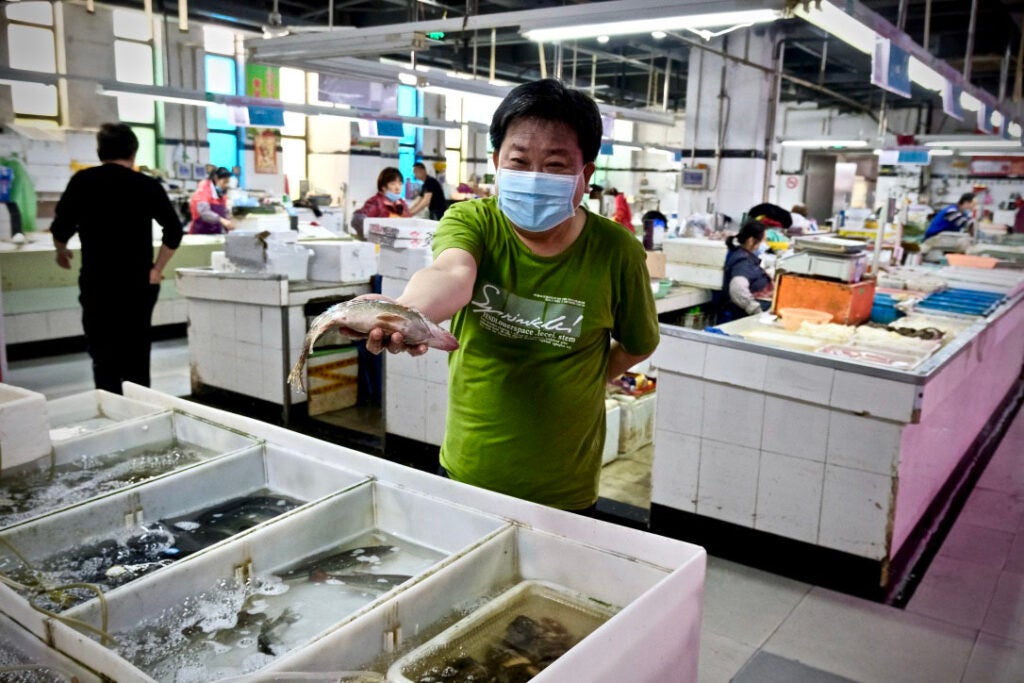 A fishmonger at a wet market in Shanghai. (Photo by Crystal Reid)

What are China’s wet markets?

In general, China’s wet markets are akin to farmers’ markets in the West, in that they are typically large collections of stalls selling fresh fruits and vegetables, along with seafood, meat and poultry. They have traditionally been the cornerstone of China’s food distribution system and a daily source of both tangible and intangible benefits for the tens of millions who shop at them.

At the start of the outbreak, calls for China to close wet markets across the country came in from far and wide, but it wasn’t until a second spike of Covid-19 cases was detected at a Beijing market in mid-June that the Chinese government officially admitted to shortcomings. The Chinese Ministry of Commerce has since acknowledged that the pandemic exposed problems with the planning, construction, infrastructure and hygiene practices at the country’s wet markets and has called for city officials to inspect premises for potential risks.

In addition to a ban on the trade of certain wildlife for consumption that was implemented soon after the start of the outbreak, sales of live poultry are now being phased out. Meanwhile, some local governments are investing heavily in sprucing up their markets, with Wuhan alone set to spend 200 million yuan ($28 million) improving and upgrading facilities. But are wet markets really as problematic as we’ve been led to believe? And what impact will such measures have on cities across China?

The dangers of semantic confusion

The main problem with calls for a blanket ban on China’s wet markets is that the vast majority do not sell live animals other than seafood. 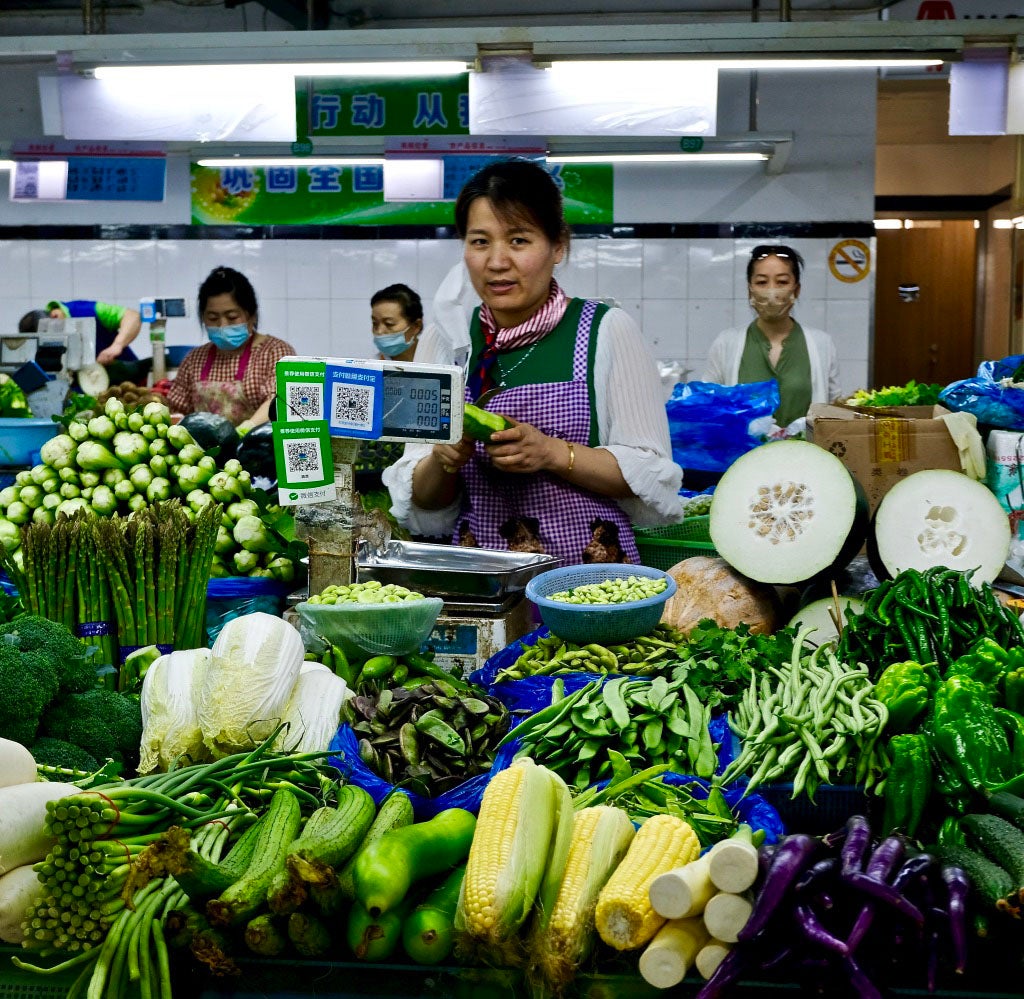 Covid-19 has given wet markets a bad rap, but in reality, they tend to sell more vegetables than exotic animals. (Photo by Crystal Reid)

Wet markets provide essential social interaction for elderly residents, many of whom shop from and chat with the individual stallholders several times a week. They’re also a valuable source of fresh produce and food knowledge for young families that may otherwise be sustained on additive-packed instant noodles.

A 2012 study that looked at longitudinal data from the China Health and Nutrition Survey found that children who live close to wet markets have better nutritional intake and eat less processed food. A 2015 study by the World Health Organization also found regions with a high density of wet markets in China, South Korea and parts of Southeast Asia suffered fewer microbial infections. While wet markets in big cities tend to buy from the same large wholesale suppliers as supermarkets, they are typically less expensive thanks to lower overheads, which helps the budgets of the nation’s poorest go further. What’s more, they provide an outlet for the produce of small-scale farmers who can’t meet the supply demands of chain stores.

Problems can arise, however, in the rare circumstances when live animals (and in particular rare and/or wild species) are introduced to such markets, as was the case in Wuhan. With everything from snakes to wolf cubs being sold and slaughtered to order, the Huanan Seafood Market was in fact a wildlife market, not a wet market. Alan Laine, a 57-year-old physics teacher from the UK who has been living in Wuhan since 2002, describes stumbling across the market’s “exotic” section. “On one side was mostly meat. The other side was mostly seafood. But I went through one small area and there were several caged animals, including hedgehogs, porcupines and some other animals I didn’t really recognise,” he says.

The faeces, urine and blood of multiple species mixing together in a place where humans congregate does not constitute a hygienic environment. Indeed, nearly every pandemic in history has been caused by zoonotic pathogens. The 1918 Spanish flu pandemic is thought to have begun with birds, HIV with apes, Ebola with bats, Mers with camels. “These animals [in wildlife markets] will be very stressed in the small cages they’re kept in, and that makes for ideal conditions for diseases to multiply,” says the academic Clive Phillips, who established the Sino-Australia Animal Welfare Centre in Beijing.

Wuhan is by no means the only place in China that’s home to markets with poor hygiene and animal rights practices. Cities south of the Yangtze River are largely responsible for the stigma of China’s exotic-meat obsession. The people of Guangzhou are said to eat anything with four legs, Yulin is known for its annual dog meat festival, and markets in Guangxi sell everything from pangolin scales to bear paws along the China-Myanmar border. Apart from some shady and specialised spots in the south and rural China, however, Chinese people are typically less interested in, and even put off by, atypical meat.

Although there are 44,000 wet markets and wholesale produce markets across the country, according to the Ministry of Commerce, they are increasingly losing out to supermarkets. Convenience stores, hypermarkets and supermarkets accounted for 64% of China’s grocery spending in 2016, and in the wake of Covid-induced lockdowns, the online grocery market is also taking a bigger share. E-grocery stores backed by internet giants like Alibaba are managing to lure in some older shoppers, typically loyal to their local wet market, with deep discounts and promises of food safety.

Even before the pandemic, China was seeing changes to its wet markets. The sale of live poultry was banned in the markets of the affluent east coast city of Shanghai in 2014 in response to an outbreak of bird flu. These days, many of the city’s markets are pristine, having been modernised with sparkling tiled floors, plate glass windows and even climate-controlled display cabinets. In the wake of the Covid-19 outbreak, cleaning efforts have been stepped up, but some stallholders worry their livelihood is on its way out all the same. “There are rumours that they might turn this wet market into a supermarket because the government has to be seen to be doing something,” says Shanghai egg seller Gao Aiyi. “But this is a huge part of the local infrastructure and social interaction. I really hope it doesn’t happen.”

Across the country in the southwestern city of Chengdu, live animals other than fish have also been off market menus for years, and many fresh-produce hubs have been tidied up and moved indoors under government regulations. Anita Chu, who introduces tourists to the city’s wet markets via her company Chengdu Food Tours, says she hopes they won’t be phased out completely. “While supermarkets are becoming more and more common here, the majority of locals still rather shop at a wet market in their neighbourhood, not only because of the fresh produce but also because of the people,” she says.

The problem with blanket bans

While welcomed by the international community, the ban introduced by China’s National People’s Congress in February is not a fix-all solution. It only covers the trading of wild animals for the purpose of eating, so it fails to cover the trade of exotic species for medicinal or entertainment purposes or the trade of live farmed animals for eating. Such bans leave plenty of room for sketchy operations within grey areas, which can be more dangerous than outright black markets, according to experts.

“Bans don’t always work the way we want, and they often have a lot of side effects, especially if you try to implement them very suddenly and broadly,” says Petr Matous, a senior lecturer in environmental and humanitarian engineering at the University of Sydney. “In many cases, you get much worse consequences by banning something and driving it underground.”

Hastily implemented bans also have a history of lax enforcement in China. While the sale of live poultry was prohibited in Guangzhou in 2015, for example, it was still a fixture at many markets and unregulated backstreet stalls as recently as December 2019.

One huge problem is the number of people who rely on the wildlife trade, which was until this year promoted by the government as a means of alleviating poverty in rural China. The industry was valued at 520 billion yuan ($74bn) in 2017, and the recent shutdown of farms and the mass culling of animals will leave scores of families destitute. While Matous believes that animal welfare and hygiene improvements at markets should be made, he says concentrating only on one area of the supply chain is not helpful. He urges policymakers to look both upstream, at how food is farmed and produced, and downstream, at how cities are built and run, in a bid to prevent future outbreaks.

Ultimately, spates of disease will always be a risk when humans and unfamiliar animal populations mix. China’s desire for so-called “warm meat” – where animals are kept live in markets and slaughtered onsite – will diminish with time and education. Bans may drive such activities underground without treating the problem of the demand being there in the first place. China’s wet markets may be changing, but the problems they amplify will persist.