The United Nations climate conference in Bonn, Germany, is an enormous event with a complex agenda. But here, on the ground, we see that it is much more than just a meeting of the signatories to the Paris Agreement.

Delegates from nearly 200 countries are meeting here to discuss the pathway towards the Paris Agreement, which aims to keep the mean global temperature increase below 2 degrees centigrade, and to prepare for the first global stocktake — a review of countries’ progress towards their climate commitments, in 2018.

At this year’s Conference of the Parties (COP23), as at others, these government delegations will negotiate the wording of texts, debate their differing points of view and seek common ground in intense meetings that are often closed to outsiders.

But there are thousands of other attendees, called observers, milling about the hallways and pavilions, shoulder-to-shoulder with party delegates. These observers come from a wide variety of non-governmental organisations and intergovernmental organizations, representing indigenous peoples, youth, women, farmers and businesses, to name a few.

These observers represent civil society, not a country’s government. They are also known as “non-state actors” — and their influence at the UN climate negotiations is growing. 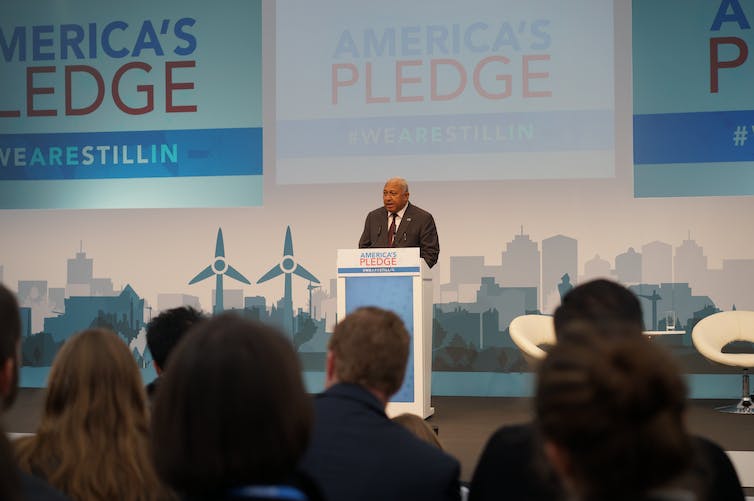 It wasn’t until 2009, at the COP15 in Copenhagen, that the participation of civil society in climate talks was galvanised. Since then, the conventional model of multilateralism, where country delegations talk to each other and non-state actors observe these negotiations, has moved towards an increasingly inclusive space. National and regional delegates are now encouraged to interact with non-state actors in a more collaborative way.

Frank Bainimarama, the Fijian prime minister and COP23 president, has frequently referred to this engagement in his speeches at this year’s meeting. He has said that the non-party actors are essential to helping countries find solutions to climate change mitigation and adaptation.

The newly released Yearbook of Global Climate Action 2017 illustrates how these non-party actors, including cities and regions, can sometimes take action more quickly within their own districts. In recognition, the UN has invited members of observer groups to participate in many of the sub-groups and committees of the UN Framework Convention on Climate Change (UNFCCC) and to work alongside its staff and the parties.

In Bonn, observers have organised panels on diverse aspects of climate change, from forests to human security to ethics and finance. These events showcase climate actions, share expertise and add a dynamic element to the meeting. The members of country delegations have a long history of participating in these panels and discussions.

The pavilions, side events and official panels cover over 50,000 square metres of space. We visited the European Space Agency’s booth to learn about how it is monitoring Greenland’s melting ice sheet and attended a yoga class in the India pavilion to stretch and relax during a long, stressful day.

This year, the significance and relevance of observers has reached a new peak following the White House’s announcement that the United States will withdraw from the Paris Agreement. For the first time in the history of these talks, the United States declined to host an official pavilion. Its delegation has held only one event, a US government sponsored panel on “clean coal.” 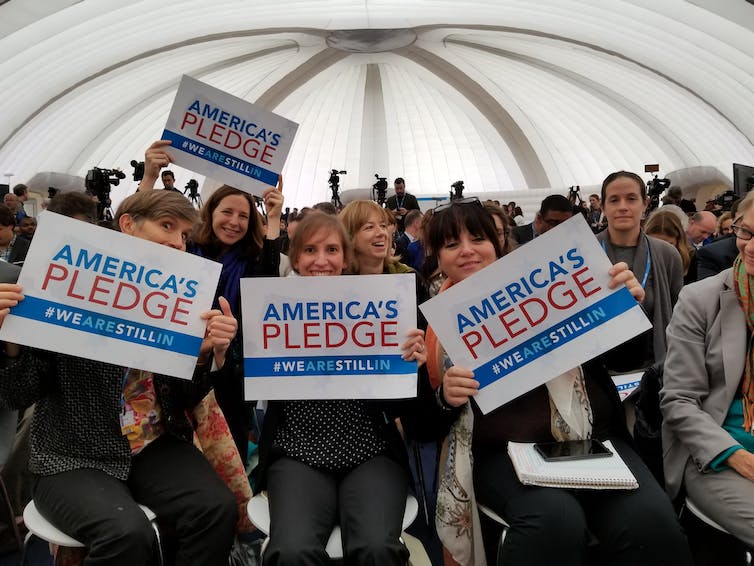 There is, however, a very large presence of non-state actors from the United States. This coalition of governors, mayors, CEOs, universities and religious leaders, including former New York City Mayor Michael Bloomberg, California Governor Jerry Brown and former Vice President Al Gore, have pledged to ensure the United States delivers on its climate commitments.

The America’s Pledge initiative will aggregate and quantify the actions of states, cites, businesses and other non-national groups in the United States to drive down greenhouse gas emissions. This is no small outcome: If the America’s Pledge community were a country, it would be the world’s third largest economy.

A role for academia

There is no shortage of academics, including many students, at the climate change meetings. York University professors, staff and students have attended annual COP meetings since 2009 as part of an observer group known as the Constituency of Research & Independent Non-Governmental Organizations to the UNFCCC (RINGO).

RINGOs advocate for the use of the best available research — from science, technology, engineering, mathematics, social sciences and humanities — to inform climate policy. In Bonn, we have been meeting first thing every morning. At one meeting this week, we learned how our daily summaries of the negotiations have been a valuable resource for other civil society groups such as environmental non-governmental organisations.

These meetings provide students with the chance to learn about the negotiation process by being involved in it. For professors, they’re an opportunity to provide experiential education, and to design classes around the climate change meetings.

The near-constant news conferences provide a clear picture of how RINGOs and other NGOs influence the parties and the negotiations.

Speakers from diverse constituencies launch policy and research reports at these events. Earlier this week, the Civil Society Review, a group of 120 organisations, released their assessment of global climate change commitments. The panelists explained that countries cannot delay action on climate change because it is already affecting the world’s most vulnerable peoples. Their message was clear and accessible.

Many observers and delegates from less-developed countries are displaying frustration at the slow progress on some of the COP23 agenda items. During the news conference, a climate scientist in the audience asked the panel whether civil society should abandon the UNFCCC process. The panelists were unanimous in saying that civil society should continue to work with the UN framework.

“There is no space other than the UNFCCC where we can talk about multilateral finance for developing countries. Developed countries are, currently, just not willing to discuss loss and damage finance,” said Brandon Wu, director of policy and campaigns at ActionAid USA.

Despite the progress made with the Paris Agreement, the task ahead remains formidable. According to Carbon Budget, CO2 emissions are rising again following three years of stability. There is still much work to do on adaptation, climate finance and protecting the countries most vulnerable to the adverse effects of climate change. This work does not always go smoothly. Nevertheless, observers are clearly cautiously optimistic.