Science is slow. It rests on painstaking research with accumulating evidence.

This makes for an inherently uneasy relationship with the modern media age, especially once issues are politicised. The interaction between politics and media can be toxic for science, and climate change is a prominent example.

Take the recent “deep freeze” along the US east coast. To scientists, it was one more piece of a larger jigsaw of climate change disrupting weather systems and circulation patterns. This includes dramatic changes seen in Arctic sea ice and the knock-on effect on temperatures elsewhere in northern latitudes – both warming and relative cooling. To President Donald Trump the cold snap was a chance to mock climate change, and some sceptics suddenly talked about an impending ice age. 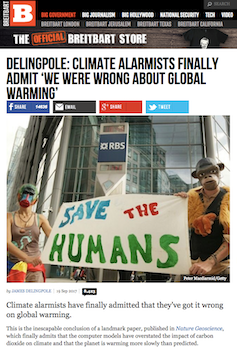 Colleagues and I experienced similar frustrations in late 2017, after we published a paper in the scientific journal Nature Geoscience, in which we concluded that there was more headroom than many had assumed before we breach the goals of the Paris Agreement. We found ourselves not only on the front page of the main British newspapers, but globally, as far-right website Breitbart ran with a story that a small band of buccaneering scientists had finally admitted that the models were all wrong – a fiction rapidly picked up by the more rabid elements in the media.

The essence of good science is to continually update, challenge, improve and refine, using as much evidence as possible. Single events rarely make for good science. And if every painstaking evaluation, updating work from years ago, may be portrayed as demolishing everything that went before – particularly at the whim of non-scientific agendas – then we have a major dilemma. The edifice of science is built with small bricks and this research was no exception.

We emphatically did not show that climate change was “less bad” or “happening slower” than previously thought. Our work built on the many previous scientific studies that had looked at the risks of unchecked emissions and the prospects for limiting warming to 2℃ above pre-industrial levels. The Paris Agreement went further, aiming to “pursue efforts” towards a more ambitious goal of just 1.5℃. Given we’re already at around 1℃ of warming, that’s a relatively short-term goal. Greater ambition therefore requires greater precision.

Our study took a microscope to that question. Where previous estimates were drawn from a range of mostly long-run models that looked at century-long changes, we instead focused on a precise definition and current starting point, and other factors which matter far less in the long term, but a lot if the goal is much closer.

Some of the earlier estimates seemed to imply a “headroom to 1.5℃” of less than a decade of current emissions – clearly unachievable given the long timespans and huge inertia. We estimated about 20 years – equivalent to global CO₂ emissions falling steadily from now until hitting zero in around 40 years – and made it plain that it still looks, to put it mildly, a formidable ambition. Other studies have since come to similar conclusions.

The more detailed reporting by those correspondents who attended the scientific briefing was accurate enough (even if some of their headlines and lead-ins weren’t), but that was soon lost in the misrepresentations that followed. Doubtless we could have done more to explain how our conclusions arose from what were actually quite minor scientific developments. Some instead turned it into a story of revolution in climate science. Scientists are also human, and these sceptic reactions reinforced a natural initial inclination among other researchers to defend their previous numbers. Some took to Twitter to do so, but themselves seemed to confuse the media headlines with our actual conclusions.

Some challenges could yet be proved right. There could, for example, be more pent-up warming currently being masked by other pollutants or already lurking in the oceans. When the goal is close, other heat-trapping emissions (like methane) also matter a lot more. Our study – like earlier work – had its share of caveats and uncertainties.

Unfortunately, while good science embraces uncertainty, politics abhors it and the media seems confounded by it. That in turn pressures researchers to simplify their message, and treat existing estimates – often, from a range – like a position to be defended. It is a risky trap for scientists, however eminent and well-intentioned, to wield overnight reactions to parry months of painstaking peer review and refinement that lie behind analyses published in leading journals.

So how should science respond? The climate policy implications are easy: nothing significant has changed. We have but one planet, and both the physical and economic processes that are driving climate change have enormous inertia. If a big ocean liner were steaming into dense fog in polar seas, only a fool would maintain full speed on the basis that the technicians were still discussing the distance to the first big iceberg.

One underlying challenge is indeed around the communication of uncertainty. This is a well-worn track, but it bears repeating. The job of science is not just to narrow uncertainties, but to educate about the risks that flow logically from it. Like a medical prognosis from smoking, the fact that things might turn out better or worse than the average is not a good reason to keep puffing. You won’t know until it is too late whether the damage has been slight, or terminal.

But science also needs to embrace and embed another obvious feature of medical practice: a doctor would never look at just your temperature to diagnose your condition. So part of the problem stems from using a single indicator for complex processes. Too much debate treats temperature (and especially the most recent global average) as the sole indicator, whereas many other factors are at play including sea levels, ocean acidity, ice sheets, ecosystem trends, and many more.

These other trends need to be reported in context, just as economics news reports not only GDP but debt, employment, inflation, productivity and a host of other indicators. And scientists themselves need to improve the art of communication in a world where research can be spun, within hours, into a story of past failure, rather than the reality of continuous improvement.