Nearly five billion people worldwide will use a smartphone by 2020. Each device is made up of numerous precious metals and many of the key technological features wouldn’t be possible without them. Some, like gold, will be familiar. Others, such as terbium, are less well-known.

Iron (20 per cent), aluminium (14 per cent) and copper (7 per cent) are the three most common metals by weight in your average smartphone. Iron is used in speakers and microphones and in stainless steel frames. Aluminium is used as a lightweight alternative to stainless steel and also in the manufacture of the strong glass used in smartphone screens. Copper is used in electric wiring.

However, enormous volumes of solid and liquid waste (termed mine “tailings”) are produced when extracting these metals from the earth. Typically, mine tailings are stored in vast impoundment structures that can be several square kilometres in area. Recent catastrophic mine tailings spills highlight the danger of improper construction methods and lax safety monitoring.

The largest spill on record occurred in November 2015 when a dam collapsed at an iron ore mine in Minas Gerais, Brazil, releasing approximately 33m cubic metres (enough to fill 23,000 Olympic swimming pools) of iron-rich waste into the River Doce. The waste inundated local villages killing 19 people and travelled 650km until it reached the Atlantic Ocean 17 days later. 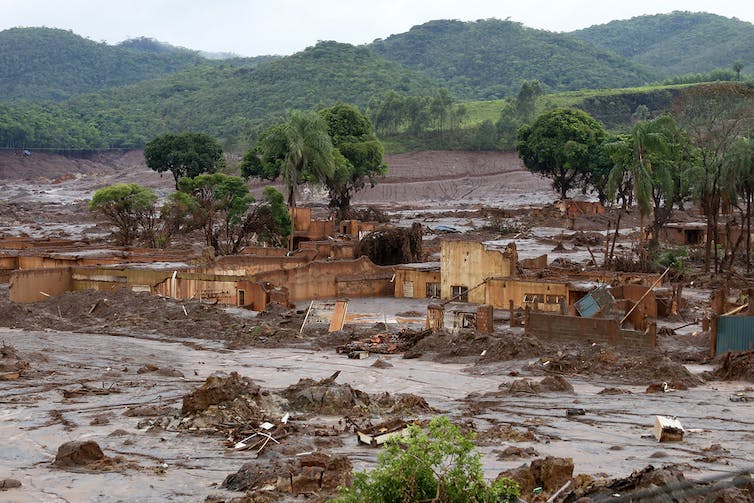 This was just one of 40 mine tailings spills that have occurred in the past decade and the long-term ecological and human health impacts remain largely unknown. One thing is clear though – as our thirst for technology increases, mine tailings dams are increasing in number and size, and so is their risk of failure.

Gold and tin are common in smartphones. But mining of these metals is responsible for ecological devastation from the Peruvian Amazon to the tropical islands of Indonesia.

Gold in smartphones is used primarily to make connectors and wires but gold mining is a major cause of deforestation in the Amazon. Furthermore, extraction of gold from the earth generates waste rich in cyanide and mercury – two highly toxic substances that can contaminate drinking water and fish, with serious implications for human health. 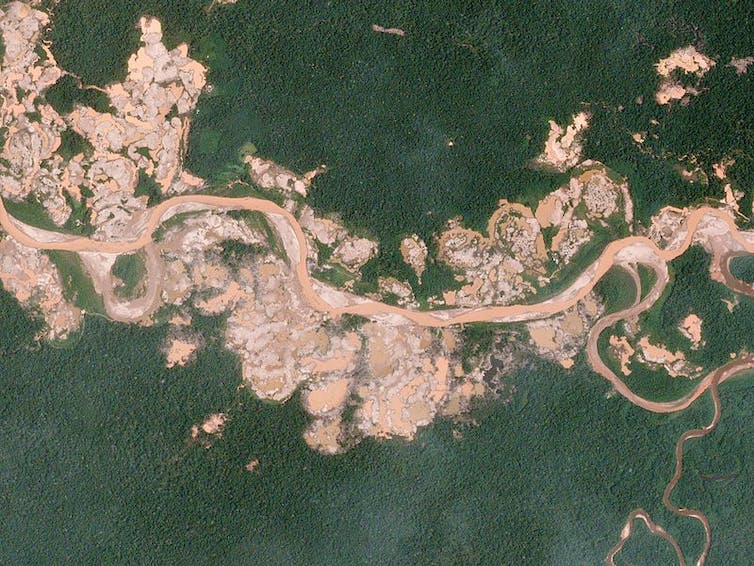 Tin is used for soldering in electronics. Indium-tin oxide is applied to smartphone screens as a thin, transparent and conductive coating that gives touchscreen functionality. The seas surrounding Indonesia’s Bangka and Belitung Islands supplies about a third of the world’s supply. However, large-scale dredging of the seabed for the tin-rich sand has destroyed the precious coral ecosystem while the decline of the fishing industry has led to economic and social problems.

The most polluted place on the planet?

What makes your smartphone smart? That’ll be the rare earth elements – a group of 17 metals with weird names like praseodymium that are mined mostly in China, Russia and Australia.

Often dubbed “technology metals”, rare earths are fundamental to smartphone design and function. Crystal clear smartphone speakers, microphones and phone vibration are possible due to small yet powerful motors and magnets manufactured using neodymium, dysprosium and praseodymium. Terbium and dysprosium are also used to produce the vibrant colours of a smartphone screen.

Extracting rare earths is a difficult and dirty business, typically involving the use of sulphuric and hydrofluoric acids and the production of vast amounts of highly toxic waste. Perhaps the most disturbing and thought provoking example of the environmental cost of our smartphone thirst is the “world’s tech waste lake” in Baotou, China. Created in 1958, this artificial lake collects the toxic sludge from rare earth processing operations.

This is the toxic tailings lake in China that fuels rare earth production. pic.twitter.com/o0gEDaOHkz

The valuable metals used to manufacture smartphones are a finite resource. Recent estimates indicate we will run out of some rare earths in the next 20 to 50 years, which makes you wonder if smartphones will still be around then. Reducing the environmental impact of smartphone use requires manufacturers to increase product lifetimes, make recycling more straightforward and be open about where they source their metals and the environmental impact. Around the world mining companies have made huge strides in practising more sustainable mining. But we as consumers also need to consider smartphones as less of a throwaway item and more of a precious resource that carries an enormous environmental burden.