Weird time zones aren’t hard to find. Why is it that flying west from London to Madrid results in shifting the clocks one time zone eastward – an hour ahead?

And did anyone ever give a thought to the zip wire across the River Guadiana between Spain and Portugal, where your flight across the river is so fast – at 45 miles per hour – that you land in Portugal one hour earlier than you left Spain?

Or, indeed, the one international border where stepping one foot over the mountains means you step three and a half hours back in time? 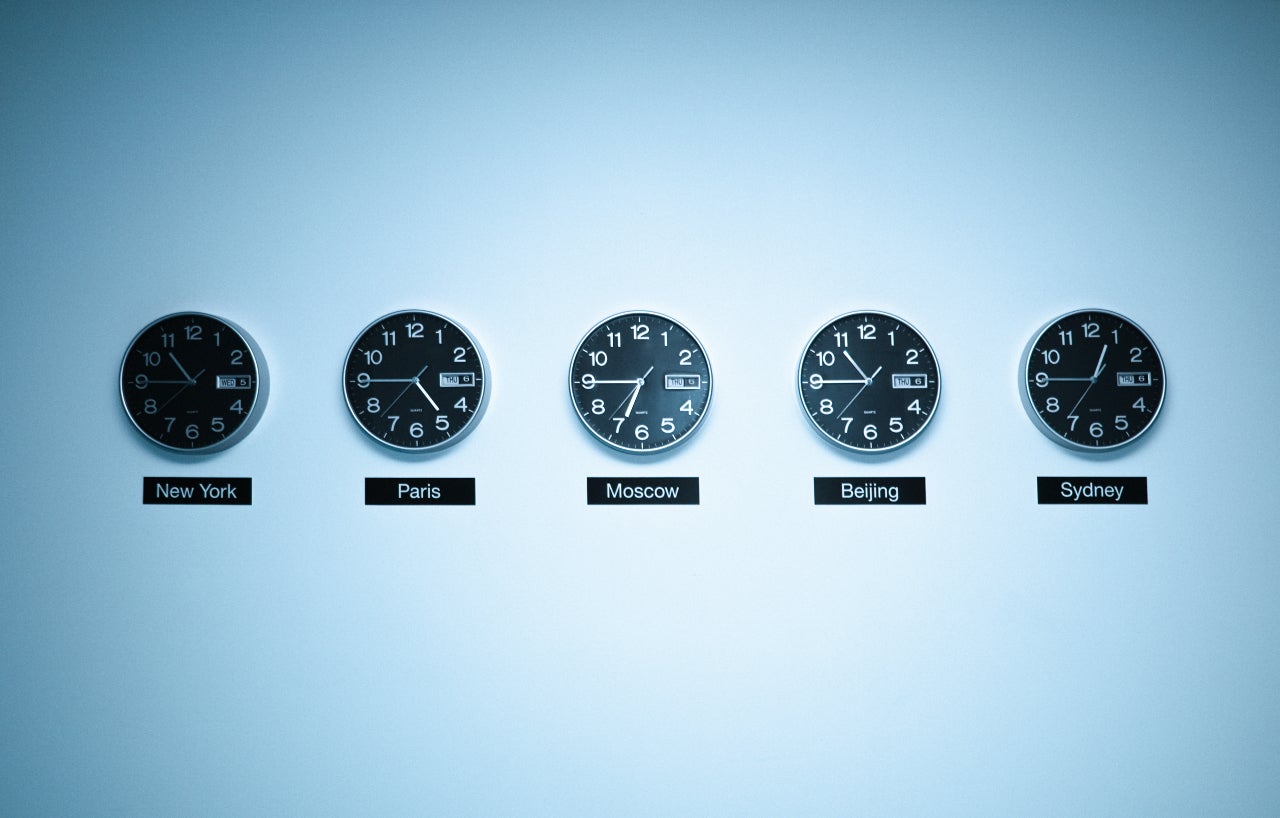 Time zones have brought strange quirks to the world ever since 26 countries – including the then independent kingdom of Hawaii – gathered in Washington D.C. in 1884 for the Meridian Conference. In the 1940s, Hitler’s sweep through Europe stopped France using GMT, and put an end to ‘Amsterdam time’, which had the Netherlands running twenty minutes ahead of London. At one point, a tiny Pacific archipelago gave the US the ultimate cold shoulder by literally moving to a different day to get away from them. Even in the 21st century, time zones mean that remote work and video conferencing can have you talking to a colleague at midnight as you’re getting ready for lunch.

And even though it’s probably better than the alternative system, where once upon a time every town set its clock to noon when the sun was at its highest and integration be damned, the standardisation of time zones has resulted in some very strange side-effects.

The third-largest country in the world, China sprawls across the Asian continent, spanning a sixth of the world’s breadth. When the sun rises on the longest day in the far eastern city of Jiamusi, it’s 7:24pm in the UK, but when it rises in the far west, in Kashgar, it’s 11:29pm.

And yet the entire country only has one time zone.

In fact, it’s so illogical that Urumqi’s time zone is unofficially split in two. One half of the city in Western China uses its own unofficial time zone, while the other runs a working day from 11pm-7pm to account for out of kilter day inflicted by Beijing. That, unsurprisingly, is incredibly complicated – as Apple learnt when an iOS update silently put all users onto the local unofficial time zone, meaning many people’s alarms went off two hours later than they were expecting.

Pleasingly, though, the country’s uniform time zone means that if you can negotiate the Tibetan Plateau and the Himalayas, you can cross over into Afghanistan and set your clock back three and a half hours – the biggest land border time-zone change on the planet.

Greenland is another fairly big place, but it has not made the same mistakes as China.

If anything, in fact, goes rather too far the other way. Almost all of Greenland runs on GMT-3, putting it four hours behind its parent nation, Denmark; but a few tiny corners insist on having things their own way.

The Thule Air Base, run by the United States Air Force in the northwest of Greenland, runs on GMT-4, while the Danmarkshavn weather station (permanent population: eight) runs on GMT – for no particularly good reason.

Meanwhile, Greenland’s 18th-largest city of Ittoqqortoormiit runs on GMT-1 along with pretty much nobody except the Azores and Cape Verde.

Staying in a similar geographic locale, the Newfoundlanders decided to screw up the orderliness of Canada’s time zones. The bulk of the country makes things simple enough, running from GMT-4 in the east, through GMT-5 in Toronto and Québec, GMT-6 in Winnipeg, GMT-7 in Edmonton to GMT-8 in Vancouver in the west.

That’s basically because Newfoundland was a separate colony when time zones became a thing, so it had the right to establish its own time zone. About a hundred years later in 1963, when it had been subsumed into the independent nation of Canada, the provincial government tried to click it back into sync with the rest of the Atlantic region of Canada. But the move was thwarted by locals.

Though, in fairness, the 6,080 people of St Pierre and Miquelon, a hang-on dribble of islands from the days of the French Empire, stubbornly sticks to GMT-3 even though the nearest major place that uses it is Brazil.

This brings us to the main cluster of countries where somebody decided it was vaguely acceptable to sit half an hour out of kilter with the rest of the world.

The reasons for all of these aren’t entirely clear, but the heavy involvement of the British Empire in the region might have something to do with it.

Indeed, India’s standardised time, though half an hour short of being the norm, isn’t as unusual a time zone as it used to be before it became independent. During the Raj, the colony operated three main times: Bombay Time, at GMT+4:51; Madras Time, at GMT+5:21; and Calcutta Time, at GMT+5:54.

Oh, and then there’s North Korea, which runs on GMT+8½, but there are far bigger issues to worry about there.

Perhaps the nation with the most unusual time zone is Nepal, which runs GMT+5¾. In theory, it’s because mean time in Kathmandu – aka, the approximation across the year of when the sun is at its highest at noon – is 5 hours, 41 minutes and 16 seconds ahead of GMT.

Eventually, you get so far round the world that the whole thing starts all over again. If you don’t know what I’m talking about, sit on the edge of your seat through any adaptation of Around The World In 80 Days and be amazed.

In essence, the International Date Line is the exact opposite side of the world to the Greenwich Prime Meridian and is where you stop being ahead of London and start being behind it. So, in the far east of Russia they’re already starting tomorrow, but Alaska’s only just got going on today.

The problem is that although the Pacific Ocean is a handily empty place to put a line between days, it’s not totally empty, so the line strays a little.

The very far eastern island of Big Diomede in Russia runs on GMT+12, even though it’s just 2.4 miles away from the closest part of the USA at Diomede, Alaska, which uses GMT-9. The Aleutian Islands – basically, Alaska’s tail – stretch across the 180-degrees line that is the theoretical International Date Line, but all use GMT-10, because it’s just easier.

But there are two places where the line has shifted in recent history, giving rise to some strange goings-on.

In December 2011, Samoa jumped forward a day, and just missed out 30. This was to get rid of an old hangover given to the country by its king in 1892, who moved the country east of the Date Line to bring it closer to America. This became impractical as Samoa grew closer to Australia and New Zealand, its much closer neighbours, and so in 2011 moved the country from being 21 hours behind Sydney – the nearest major business hub – to being three hours ahead of it, which made more sense.

Though, sadly for the Americans, it left American Samoa and its time zone marooned, only 70km away but 24 hours apart (25 in summer).

So they shoved the whole country over to the western side of the Date Line in 1995, creating the time zones GMT+13 and GMT+14, and dragging the whole line 2,000 miles eastward. When you remember that the Line Islands are further east than Hawaii and most of Alaska, this is pretty weird.

The most fun quirk of all of this is that, for a brief moment every day, there are three days going on at once. At 10:30am on Wednesday in London, it’s 11:30pm on Tuesday in the inhabited New Zealand-owned island of Niue, and 12:30am on Thursday in the Line Islands of the Republic of Kiribati (pronounced “Kiribas”).

In theory, this isn’t difficult. You take your big country, helpfully divided into states running east to west, and you give them relevant time zones.

The state of Western Australia runs on GMT+8, which is fine. Then, the states of New South Wales, Tasmania, Victoria, the Capital Territory, and Queensland run on GMT+10. So far so good.

The logical thing for the middle states of South Australia and the Northern Territory to do would be to run on GMT+9, right? Especially as they almost perfectly straddle 135 degrees west, the centre of the +9 time zone area. In fact, they run GMT+9½.

And even that’s not enough by way of complication. The southern states of South Australia, New South Wales, Tasmania, Victoria, and the Capital Territory use daylight saving time, but the other three states don’t.

So for half the year, Australia goes from having three time zones to having five.

To make it worse, there’s Lord Howe Island, which is technically part of New South Wales, but is off halfway to New Zealand. During the southern hemisphere winter, it uses GMT+10½, just half an hour ahead of Sydney and the like, but in winter it uses a daylight saving time half an hour ahead – running at GMT+11. That makes it the only place in the world that does not switch a full hour for daylight saving time.

Because some people just want to watch the world burn, there’s a tiny town of 86 people in the far east of Western Australia that decided to just invent its own time zone.

Eucla, and a few poor stragglers nearby, use GMT+8¾. Apparently, with this time nonsense, you can basically just do what you want.

This article is from the CityMetric archive: some formatting and images may not be present.
Topics in this article: History, Maps

CityMetric was the New Statesman's sister site covering the business, politics, design and transport of the world's cities before becoming City Monitor.
Websites in our network