The eruption of Mount Agung on the island of Bali has sparked worldwide media interest, yet volcanic eruptions in Indonesia are nothing new. Of the country’s 139 “active” volcanoes, 18 currently have raised alert levels, signifying higher than normal seismic activity, ground deformation or gas emissions. On a global scale, in any week in 2017, there were at least between 14 and 27 volcanoes erupting.

Most observed volcanic activity takes place along the Pacific Ring of Fire, a region around the Pacific Ocean where several tectonic plates meet, causing earthquakes and a chain of what geologists call subduction zone volcanoes. Other eruptions occur at volcanoes within continental interiors such as Ol Doinyo Lengai in Tanzania, or on oceanic islands like Hawaii. Many also take place hidden from view on the sea floor, with some of the most active underwater volcanoes located in the Tonga-Kermadec island arc in the south-west Pacific. 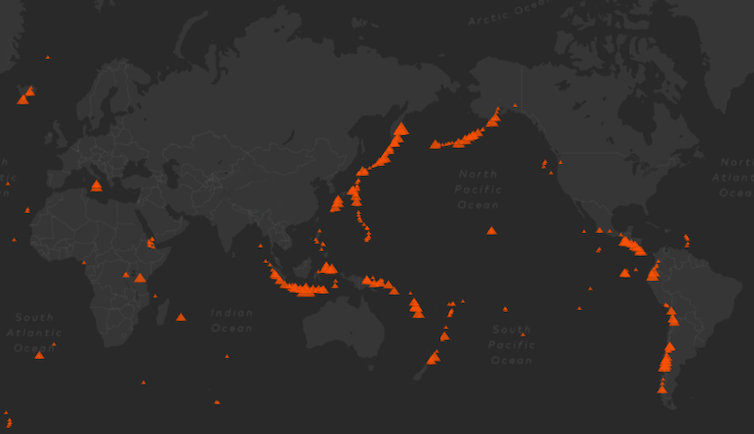 The current eruptions on land range from gentle lava effusions to moderate-sized explosions and are tiny compared to the largest in Earth’s history. Even the 1815 eruption of Mount Tambora, also in Indonesia, arguably the largest eruption in recent recorded history, is dwarfed by super-eruptions in the geological past such as that of Toba volcano on Sumatra some 74,000 years ago. Toba erupted approximately 70 times more magma than Tambora, helped plunge the earth into another ice age and may have even created a genetic bottleneck in human evolution.

In fact, Toba was the largest eruption in the past 25m years, so there is little chance of a similar catastrophe any time soon. Nevertheless, it is the frequent, small- to moderate-sized eruptions that pose a constant volcanic threat. Around the globe today, about 800m people live within 100km, and 29m within 10km, of active volcanoes.

“Volcanic threat”, a measure that combines the level of hazard and the number of people exposed to it, is by far the highest in Indonesia, followed by the Philippines, Japan, Mexico and Ethiopia. These five countries combine to make up more than 90 per cent of the total global volcanic threat. However, as a proportion of population, volcanic threat is highest on small islands such as Montserrat, which are entirely volcanic.

Which are the volcanoes to watch in 2018? Some of the volcanoes that currently show signs of unrest may simply calm down without eruption, while others may enter a phase of eruption in the months to come and will need to be watched and monitored closely.

As well as Agung, here is our choice of some to keep an eye on:

One of Japan’s less known but most active volcanoes, Kirishima, is a group of several volcanic cones with eruptions recorded on and off since 742. An eruption at one of these cones, Shinmoedake, in 2011 was the largest at Kirishima for more than 50 years. Shinmoedake erupted for the first time in six years in October, with white plumes rising 200 metres above the crater rim. Presently, the alert level remains elevated.

Drone Footage of Eruption of Shinmoedake Volcano in Japan, part of the Mount Kirishima Cluster of Volcanoes#新燃岳 #火山pic.twitter.com/K5yJuaCUQG

Merapi is one of the most dangerous volcanoes in Indonesia due to its frequent eruptions and densely populated slopes. With a death toll of nearly 400 people, its 2010 eruption is so far the deadliest of the 21st century. One may argue that another eruption of Merapi is overdue, although there are no immediate signs of increased volcanic activity or unrest.

This ice-covered volcano has erupted twice since the early settlement of Iceland, including the country’s largest-ever explosive eruption in 1362 and another in 1727-28. In both cases the eruptions were followed by massive and lethal flooding, as meltwater from subglacial lakes on the mountain were suddenly released.

Öræfajökull appears to be waking up. Small seismic tremors inside the volcano have been recorded since August 2017 and, in November, a depression on the surface of the ice inside the main crater appeared – a phenomenon that is usually caused by ice melting below the surface as heat builds up. 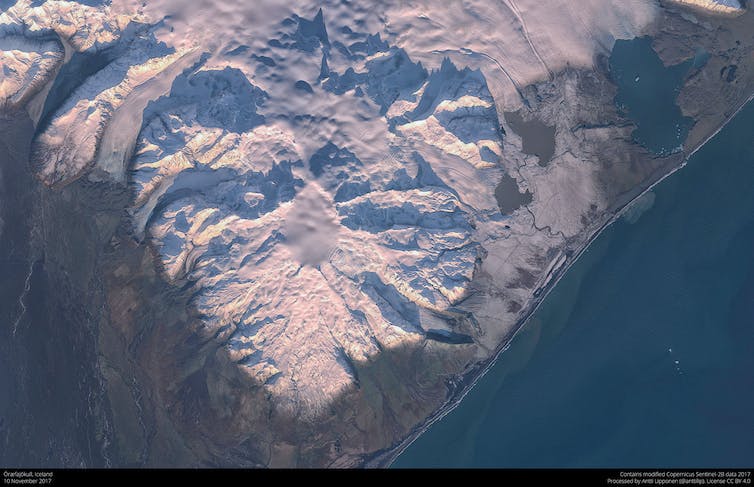 Mexico’s “smoking mountain”, pictured at the top of this article, lies 70km south-east of Mexico City and is the country’s most active volcano. The volcano is currently erupting – as it has done so intermittently since 2005 – with lava dome growth, explosions, ash plumes up to a few kilometres high and minor ash fall in surrounding areas.

Snow-covered Villarrica volcano is one of only a small number of volcanoes around the world with an active lava lake. A gradual increase in seismic and lava lake activity, producing lava fountains up to 150 metres high, have been documented since mid-November 2017.

Kilauea volcano on Hawaii’s Big Island has spewed basaltic lava almost continuously for 35 years and there is no reason to expect this eruption will end any time soon. The volcano continues to erupt at its summit and from the Puʻu ʻOʻo vent on its East Rift Zone, producing lava flows that occasionally enter the ocean.

So these are some of the volcanoes that will need to be monitored closely over the next weeks and months. But volcanic unrest can also start suddenly at dormant volcanoes such as Hekla in Iceland which, based on its past record of decades of quiescence followed by sudden huge eruptions, may awake with little warning.