Urban green spaces – including parks, woodlands, riverbanks, and gardens – are an essential part of a web of physical and mental well-being. They provide spaces to socialise and opportunities to connect with the natural world. They are restorative enclaves in stressful cities.

The UK government’s first strategy on loneliness, recently launched, recognises the importance of green spaces in supporting this web of connections. But England’s urban natural environment is increasingly at risk, jeopardising the ambitions of the loneliness strategy from the outset.

A whole chapter in the loneliness strategy is devoted to community infrastructure – the places, spaces and activities that bring people together where they live. The strategy promises to unlock the potential of underused community space, including local parks. It recognises the wealth of research that shows how green spaces enhance health and well-being and provide community meeting places.

Our research at the University of Sheffield’s Department of Landscape Architecture reinforces and enriches these key messages about green space and well-being. We are examining the relationship between natural urban spaces and mental well-being, exploring spaces, stories and connections in Sheffield, Britain’s fifth-largest city. 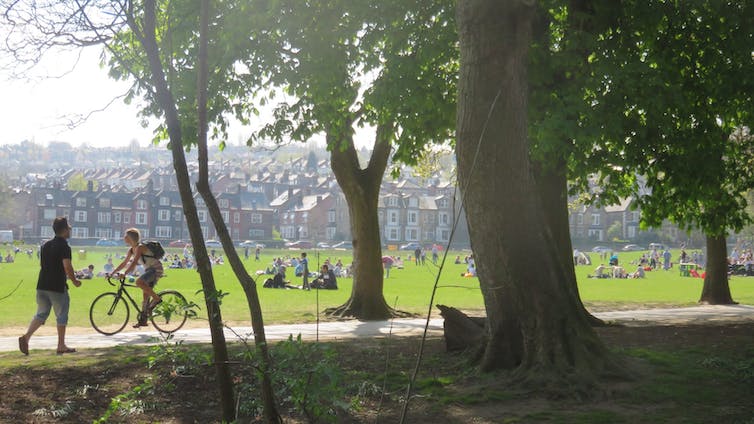 What we have found in Sheffield resonates internationally. A study in Adelaide, for example, highlighted the interrelationships of green space, walking and social interaction in supporting well-being. Another study in the Netherlands highlights the role of green spaces in reducing stress, encouraging physical exercise and enhancing social cohesion. Our concern has been not only to enrich this scholarly understanding, but to examine how it can be better translated into practice.

In our own research we have worked with local professionals and community members, from volunteers in parks to doctors and urban planners. We have identified five simple and inexpensive interventions that will help to maximise people’s connections with urban nature and create more favourable contexts for well-being. Three of those interventions have a direct bearing on isolation and loneliness.

One is the provision of toilets and cafes in parks and woodlands. As one community worker told us: “It’s not that the toilet improves people’s mental well-being, it’s that the toilet allows them to do the activity that will improve their well-being.” Without them, many older people, parents with young children, or people with disabilities or long-term illnesses may decide that the city’s parks are only for the fit and healthy. More than 1,700 UK public toilets have closed in recent years, although MPs have long argued that councils should have a duty to provide facilities in key locations such as parks.

A second intervention is the provision of staff in parks. These are people employed to look after and maintain the environment but also to run activities and support voluntary groups. One member of a local volunteers group told us how invaluable Sheffield City Council’s park rangers were in helping to organise and inform their work. Without them, the opportunity this group provided for meeting others and engaging in meaningful activity might be lost. According to the trade union Unison, 81 per cent of parks departments have lost skilled staff since 2010.

We are also recommending support for voluntary and community organisations to put on activities in parks and green spaces. These are the organisations that are rooted in local communities and can provide a vital bridge between spaces and people, creating safe and supportive environments for those who might be nervous about venturing outside.

Groups like Manor & Castle Development Trust, for example, offer health walks and confidence-building activities for people in one of Sheffield’s most deprived neighbourhoods. Such community infrastructure doesn’t simply sustain itself: it requires support, links with local planners and policymakers, and financial and material resources.

One voluntary sector worker explained the difference a trusted local organisation can make:

Having a friendly face – having people there that they know and that they recognise… that’s so important. And for so many people, that might be the only contact that they have all day.

These interventions are not expensive, but they do cost. They are also the easiest costs to strip out of hard-pressed local government budgets, with the effects felt disproportionately by disadvantaged people in deprived areas. When they are cut, green spaces become underused and can appear hostile rather than welcoming.

The government’s loneliness strategy highlights the £500,000 recently allocated by the Ministry of Housing, Communities & Local Government to “identify and share effective and deliverable models of service delivery” through the new Parks Action Group.

But the funds for managing the green spaces that people use to socialise, to meet friends or find restorative environments outside the home, continue to shrink. In just one city, Newcastle-upon-Tyne, funding for parks and allotments has been cut by 90 per cent. Over the next ten years, without further cuts, the council faces a shortfall of a further £17.5m.

These cuts are directly linked to austerity policies that have removed resources from local government while adding to local authority responsibilities. In 2019-20, English local authorities face a further loss of £1.3bn in government funds.

In this context, even simple, cheap interventions to increase well-being and reduce loneliness become harder to achieve. The words in the loneliness strategy may be warm, but the climate lonely and isolated people face in English cities continues to grow harsher.