SpaceX has now launched the most powerful spacecraft since the Apollo era – the Falcon Heavy rocket – setting the bar for future space launches. The most important thing about this reusable spacecraft is that it can carry a payload equivalent to sending five double-decker London buses into space – which will be invaluable for future manned space exploration or in sending bigger satellites into orbit.

Falcon Heavy essentially comprises three previously tested rockets strapped together to create one giant spacecraft. The launch drew massive international audiences – but while it was an amazing event to witness, there are some important potential drawbacks that must be considered as we assess the impact of this mission on space exploration.

But let’s start by looking at some of the many positives. Falcon Heavy is capable of taking 68 tonnes of equipment into orbit close to the Earth. The current closest competitor is the Delta IV heavy which has a payload equivalent of 29 tonnes. So Falcon Heavy represents a big step forward in delivering ever larger satellites or manned missions out to explore our solar system. For the purposes of colonising Mars or the moon, this is a welcome and necessary development.

The launch itself, the views from the payload and the landing of the booster rockets can only be described as stunning. The chosen payload was a Tesla Roadster vehicle belonging to Space X founder and CEO Elon Musk – with a dummy named “Starman” sitting in the driver’s seat along with plenty of cameras.

This sort of launch spectacle gives a much needed public engagement boost to the space industry that has not been seen since the time of the space race in the 1960s. As a side effect this camera feed from the payload also provided yet another proof that the Earth is not flat – a subject about which Musk has previously been vocal.

The fact that this is a fully reusable rocket is also an exciting development. While vehicles such as the Space Shuttle have been reusable, their launch vehicles have not. That means their launches resulted in a lot of rocket boosters and main fuel tanks either burning up in the atmosphere or sitting on the bottom of the ocean (some are recovered).

This recovery massively reduces the launch cost for both exploration and scientific discovery. The Falcon Heavy has been promoted as providing a cost of roughly $1,300 per kg of payload, while the space shuttle cost approximately $60,000 per kg. The impact this price drop has for innovative new space products and research is groundbreaking. The rocket boosters on this test flight had a controlled and breathtakingly simultaneous landing onto the launch pad.

So what could possibly be wrong with this groundbreaking test flight? While visually appealing, cheaper and a major technological advancement, what about the environmental impact? The rocket is reusable, which means cutting down the resources required for the metal body of the rocket. However, the mass of most rockets are more than 95 per cent fuel. Building bigger rockets with bigger payloads means more fuel is used for each launch. The current fuel for Falcon Heavy is RP-1 (a refined kerosene) and liquid oxygen, which creates a lot of carbon dioxide when burnt.

The amount of kerosene in three Falcon 9 rockets is roughly 440 tonnes and RP-1 has a 34 per cent carbon content. This amount of carbon is a drop in the ocean compared to global industrial emissions as a whole, but if the SpaceX’s plan for a rocket launch every two weeks comes to fruition, this amount of carbon (approximately 4,000 tonnes per year) will rapidly become a bigger problem.

The car test payload is also something of an issue. The vehicle has been scheduled to head towards Mars, but what has not been made clear is what is going to happen to it afterwards. Every modern space mission is required to think about clearing up after itself. In the cases of planetary or lunar satellites this inevitably results in either a controlled burn-up in the atmosphere, or a direct impact with the body they orbit.

Space debris is rapidly becoming one of the biggest problems we face – there are more than 150m objects that need tracking to ensure as few collisions with working spacecraft as possible. The result of any impact or degradation of the car near Mars could start creating debris at the red planet, meaning that the pollution of another planet has already begun. 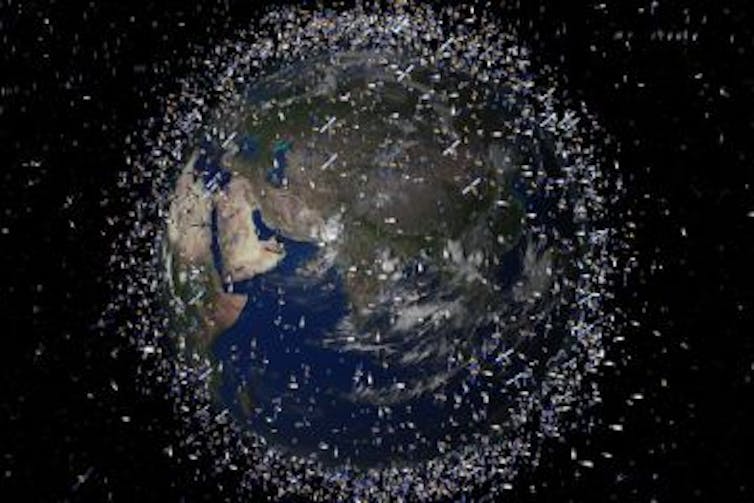 However, current reports suggest that the rocket may have overshot its trajectory, meaning the vehicle will head towards the asteroid belt rather than Mars. This is probably going to mean a collision is inevitable. The scattering of tiny fragments of an electric vehicle is, at minimum, pollution – and at worst, a safety hazard for future missions. Where these fragments end up will be hard to predict – and hence troublesome for future satellite launches to Mars, Saturn or Jupiter. The debris could be drawn by the gravity of Mars, asteroids or even swept away with the solar wind.

What is also unclear is whether the car was built in a perfect clean room. If not there is the risk that bacteria from Earth may spread through the solar system after a collision. This would be extremely serious, given that we are currently planning to search for life on neighbouring bodies such as Mars and Jupiter’s moon Europa. If microorganisms were found there we may never know whether they actually came from Earth in the first place.

Of course, these issues don’t affect my sense of excitement and wonder at watching the amazing launch. The potential advantages of this large-scale rocket are incredible, but private space firms must also be aware that the potential negative impacts (both in space and on Earth) are just as large.