Night has always been a difficult realm for humans: we’ve had to learn to cope with the cold and the dark to thrive in it. Since the industrial revolution we’ve found ways to adapt our homes and cities to operate during the night. But as our conquest of the dark continues, the border between night and day is becoming increasingly blurry.

In 1988, sociologist Murray Melbin described the night as a frontier not unlike the American West. As early American settlers expanded westwards across the continent, so too, he argued, was society beginning to expand into the night.

Melbin’s metaphor treated the night as a separate social entity and he argued that, just like geographical frontiers, it was inhabited by “pioneers”: individuals and groups seeking work or leisure opportunities outside mainstream society, whether through desire, or necessity.

Taking back the night

For example, the night time tends to have a higher percentage of black and minority ethnic workers than the day. Likewise, the LGBTQ community in the mid-20th century – and still today, in some contexts – found that, with society sleeping, they could gather in bars and clubs that acted as community centres as well as places of leisure.

Political action has often found a home at night, too: from evening meetings of activists in community centres or the back rooms of pubs, to more radical political activism. In her autobiography, Sylvia Pankhurst for example described the suffragette arson campaign: “Women, most of them very young, toiled through the night across unfamiliar country, carrying heavy cases of petrol and paraffine”.

Despite this, the night is not necessarily a welcoming space for all. The dark hours can be threatening for oppressed and marginalised groups and movements. Those sleeping rough struggle to fall asleep, fearing for their personal safety. And movements such as Take Back the Night have had to campaign hard for womens’ right to use the city at night time to be taken seriously.

But things are changing. The night has become more open and our homes are now connected like never before. First 24-hour news, then mobile and internet communication, have made the domestic setting more porous – you might be reading this on a phone or tablet in bed at 2am. No longer is the night cut off from mainstream society; instead, people are able to communicate and engage with the outside world.

Even in the UK, which has long had earlier business closing hours than most other countries, many shops and services now stay open long into the evening. Some large cities have 24-hour transport networks: London’s night tube is perhaps the best known, but night buses can be found in most larger cities. Though 24-hour businesses are not widespread, they are much more common than they once were.

Indeed, the night itself has become more day-like. LED street lights produce a white light which is much closer to daylight than the orange glow of their sodium gas lamp predecessors. LEDs can reduce the “glare” of light pollution, but in 2017 the British chief medical officer’s annual report warned that they could also change people’s circadian rhythms, and affect their health.

After-hours festivals and cultural activities are now commonplace, and, though pubs and nightclubs still dominate our darkened city centres, more cafes now open into the evening. It has been argued that the traditional night time will soon be lost altogether – that an era of “24/7 society” is inevitable. I would argue that this goes too far.

Go to any suburban street in almost any world city, and you’ll find nights to be darker, quieter and less active than in the city centre. Even notorious drinking and party spaces have their downtime. At 4am, Newcastle’s Bigg Market – a known hotspot for revellers – contains little more than a few seagulls picking at abandoned kebabs. 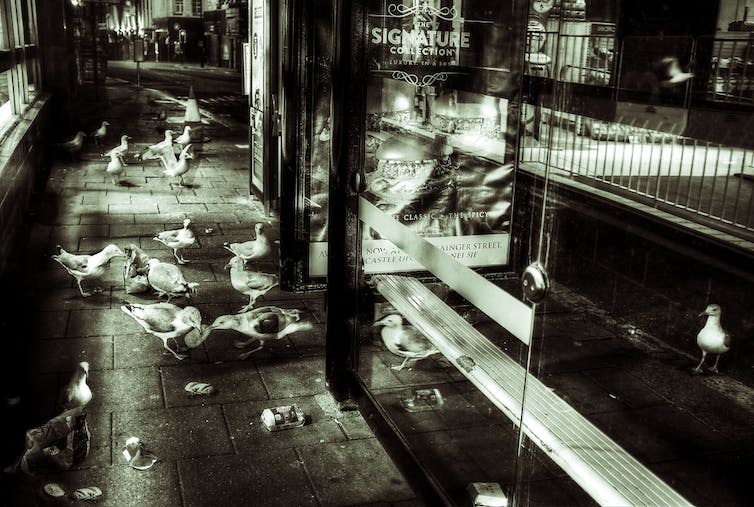 Night is undoubtedly still a challenge – lighting is expensive, and society pays for it in money and emissions of carbon dioxide. Night time mobility remains limited and the night bus and rail services run on much reduced networks.

Still in the dark

So, the night time is not disappearing entirely. Instead, its traditional form is fragmenting – splintering across time and space. Islands of “day-like” activity are starting to appear in city centres, while traditional night time activities are creeping into the day.

Political organisation has now found new spaces of online activity, reducing the reliance on evening and late night meetings. Companies such as Uber and Deliveroo are creating a new employment model – one that moves away from “day shifts” and “night shifts” towards shorter, more frequent periods of work. More broadly, research has found a trend towards people spreading their work out across 24 hours.

Rather than a “loss of night”, we might therefore instead be seeing a transformation of both night and day, with both taking on more varied and more flexible characteristics.

The day is definitely encroaching on the night, as our behaviours and economies are increasingly unrestrained by sunrise and sunset. But until our cities offer the same services and experiences at 4am as at 4pm, the night will retain some of its mystery.