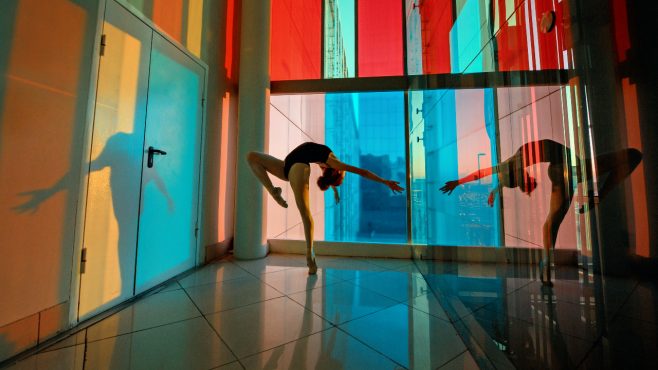 A young girl dancing ballet in the city. (Photo by DardaInna/Shutterstock)

The live arts and entertainment industry has been disrupted by Covid-19 more than most. Theatres, stadiums and other entertainment venues were forced to close overnight as lockdown restrictions were imposed across the world. Despite the vaccination roll-out under way, signs of recovery have yet to materialise and in some countries, the sector might not reach financial recovery until 2025.

Even in the face of such adversity, technology teams helped live entertainment providers keep the show on the road. Tech Monitor spoke to the technology leaders at the English Football Association and the National Ballet of Canada about they created a safe environment for players and performers to provide much-needed entertainment for audiences.

Numbers game: how the FA analysed the risk of transmission during a football match

When the scale and gravity of the UK’s Covid-19 outbreak became clear in March 2020, the English Football Association (FA) and Premier League postponed matches indefinitely, leaving millions of fans devastated. A few weeks into lockdown, the two organisations began to assess how teams could resume playing in a Covid-safe manner. Together, they launched Project Restart to understand the risk of transmission between players on the pitch.

“At the beginning of the pandemic nobody really understood [what was going on],” says recalls Craig Donald, chief information officer at the FA. “There were lots of blanket statements about risk and at first glance, of course football looks like a high-contact and therefore very risky sport to play. We felt we had to do some work to try and understand and either validate that or potentially use the data to challenge the uninformed view.”

Donald and the England technical team, the division of the FA in charge of running the teams, sought to analyse previous games to assess the real risks of transmission. In conjunction with Google Cloud, they built a new ‘player performance system’ that analyses video footage to assess how close the players get during a game and for how long.

Donald’s team analysed 380 Premier League games from the 2018-19 season and roughly 280 games from the 2019–20 season. This comprised 100 million frames of data and 40 billion interactions between players – around ten terabytes of video data. Google Cloud conducted the analysis that allowed the FA to model the risk to players during a match.

“I think it was in a matter of days or weeks that we could form some conclusions,” Donald recalls. The analysis revealed that “the amount of time two players were within two metres of each other was about 90 seconds per match”. For goalkeepers, it was 70 seconds.

Here is the most uncontrolled environment within the game and we can prove that the risks are minimal there. Craig Donald, the FA

Once it had proven the game itself was safe, the FA could then work on its off-pitch operations, such as hotel stays, security and stadium access. “Here is the most uncontrolled environment within the game and we can prove that the risks are minimal there,” explains Donald. “It was probably the starting point to allow us to have those broader discussions.”

The FA shared its analysis with the UK government, which concluded that matches were safe enough to resume behind closed doors. The Premier League restarted in June 2020, to the relief of football fans around the world.

The National Ballet of Canada keeps the dance going online

For the National Ballet of Canada, lockdown offered an opportunity to innovate. Unable to welcome audiences to its venues, the Toronto-based arts organisation wanted to engage them online. But, the only video it was capturing at the time was rehearsal footage, and it was not of commercial quality. “We didn’t have content to put online,” says Chris Sonnemann, the National Ballet of Canada’s director of technology.

Lockdown restrictions prevented musicians and dancers from coming close to each other, so the Ballet had to think laterally. One solution was for members of the orchestra to film themselves using their smartphones. “They just recorded their instrumental pieces to a click track and the maestro, our director of music, brought everything together,” says Sonnemann. The piece was shared with donors and patrons of the National Ballet of Canada.

It wasn’t just performances that went online. Ballet dancers are high-performance athletes who need to maintain peak physical condition, Sonnemann explains, and without practice, their risk of injury increases greatly. But the company’s rehearsal space in Ontario was closed during lockdown, so it needed to work out how to conduct rehearsals over Zoom.

Sonnemann provided dancers with high-quality cameras and audio equipment, while the director of music and stage manager developed best practices for instructors to conduct online classes. Dancers joined from their kitchens and living rooms; the company provided slip-resistant flooring for those who needed it. And when the company could return to its rehearsal studio, Sonnemann established video connections between rooms so the entire company could rehearse at the same time while maintaining social distancing.

“We’ve made a real concerted effort to ensure the safety of our dancers first and foremost,” adds Sonnemann. “We needed to protect our staff 100%, so these efforts were put in place, in addition to monitoring, proper testing, and health check-ups so that we could track if there were any infections.”

The Ballet does not yet have a date to resume normal activities, but Sonnemann says the intention is to reopen in the autumn. Until then, he and his team will continue to provide the technology necessary to keep the company moving.