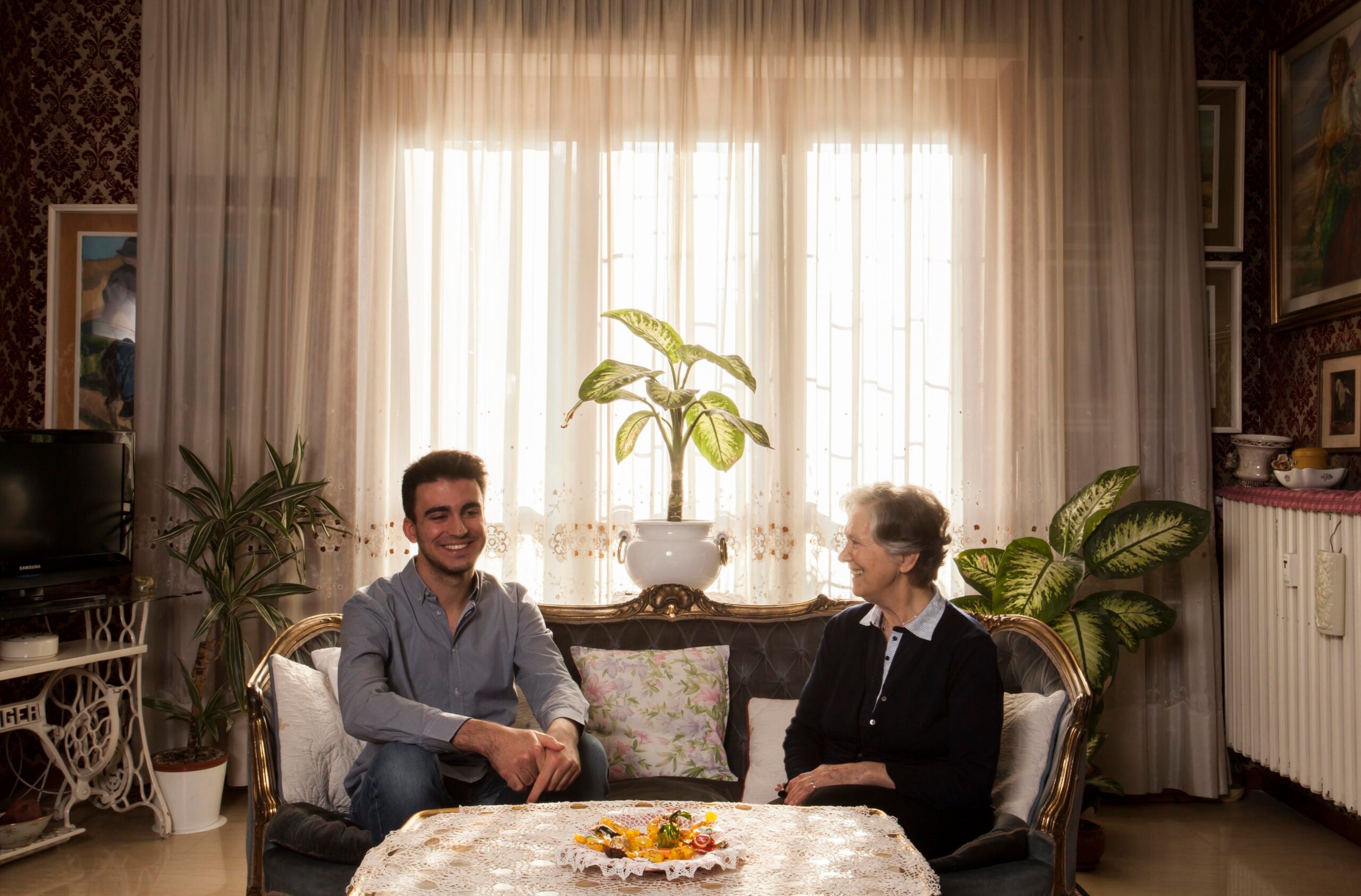 When 81-year-old Alberta Venturini went shopping in her Milanese neighbourhood ten years ago, little did she know that her morning errand would change the following decade of her life.

Back then, Venturini lived in a spacious and bright apartment in Milan. She had been living there for 47 years. But in her 70s and widowed for three years, she had started to feel the economic and emotional strain of living alone in such a big place. That morning, Venturini found a flyer advertising an intergenerational home-sharing programme run by the association Meglio Milano and thought,“Why not give it a try?”

Intergenerational home sharing is still a relatively niche yet successful alternative housing option that fulfils the complementary needs of two very different demographics: the elderly, who often feel alone and must pay expenses for their domiciles, and young people, attracted to cities for study and work opportunities. Home-sharing programmes combine these needs, matching an intergenerational duo based on their attitudes and interests.

After getting in touch with Meglio Milano, Venturini started hosting young people on a regular basis. Last year, the organisation introduced her to Lorenzo Gozzano, a 21-year-old student relocating to Milan from Piedmont to study law. Once he had arrived in Milan, he was faced with the prospect of the city’s expensive rents.

“As cities become more appealing, they also become more competitive to those demographics which can’t afford to access it,” says Silvia Mugnano, professor of sociology and social research at Università Milano-Bicocca. “It has become apparent that we must try to boost cities’ abilities to retain people by employing a series of policies, actions and outreach that not only address a city’s perceived appeal but also its inhabitants’ integration within the urban landscape.”

Intergenerational home-sharing practices embrace this paradigm. They aim to improve quality of life while working towards solving the issue of isolation. What’s more, they cement people’s presence into their urban localities through the establishment of meaningful social relationships that transcend mere “house sharing”.

Intergenerational housing isn’t just a way to address economic issues. While it helps the elderly financially and psychologically, it also offers an alternative to typical housing policies directed at young people, research from Università Milano-Bicocca has shown. “Living in a house with an elderly person is beneficial for students’ quality of life,” says Mugnano.

Students don’t end up in student flats or cramped rooms, she explains, but in real homes. In Milan, Gozzano feels fortunate to be able to share both living space and quality time with Venturini. “I feel luckier than my friends,” he says.

Home-share programmes around the world offer slightly different approaches and commitments from guests and hosts, but what they have in common is a way for elderly residents to remain in their homes. In Italy, “housing costs represent 35% of the overall expenses for the over-70s”, Mugnano points out. Intergenerational home-sharing residents often remain in their lifelong homes and avoid being uprooted.

A pioneer of home-sharing practices is Linda Hoffman, president of the New York Foundation for Senior Citizens, who first created a programme for the city’s older denizens in 1981. “One of the top-priority needs of the elderly in New York City was affordable housing,” says Hoffman. Back then, when the project started, it was aimed at creating home-sharing practices between seniors. Now the programme has grown bigger and is open to those above 60 years old and, on the younger end, anyone over 18. More than 25,000 people have participated in the initiative since its inception, with some friendships and matches lasting as long as two decades.

Often those joining the programme don’t even have economic complications; they are simply lonely. “We had a woman who lived really close to a hospital, and we matched her with a nurse,” says Hoffman. “She didn’t need money, just someone in the house because she was afraid of being alone at night.” In another instance, a young actor was matched with an elderly woman near the Theatre District. “They just developed a grandson-and-grandmother relationship,” says Hoffman.

The presence of a younger person in the house can be highly reassuring, both for the elderly and their relatives. Ensemble2générations, a home-sharing programme in France, describes it as a “caring presence”. The organisation has completed 5,000 matches since its creation in 2006. It offers three different levels of commitment from the younger sharer: in one, the tenant lives rent-free with the promise of being present at night. In another scenario, the boarder receives a monthly contribution in exchange for shared activities like teaching rudimentary IT to the older person or going to the museum. The third level of commitment mandates a caring presence plus “solidarity rent” – a monetary contribution to the elderly householder. In Paris and peripheral areas, solidarity rent usually varies between €390 and €450 per month. On the free market, by contrast, according to the French real estate website SeLoger, the average rent in the French capital, Paris, for a one-room furnished property is €898, at an average price of €40.3/m.

Other programmes, such as Homeshare UK, have a very flexible model suitable to most anyone. The householder is not always an older person, but it can be someone with an impairment that makes living at home on their own a bit difficult. It’s not a caregiver-patient situation – rather an exchange of meaningful time.

The common denominator of these home-sharing programmes is a comprehensive matching process assessing the interests and expectations of future housemates. Positive relationships are the result of a successful matchmaking process. After filling out an application that assesses both parties’ needs (for example, the distance of the house from university or work) and the commonality of interests of the potential match, hosts and guests go through a vetting process and eventually meet.

Back in Milan, Gozzano loves staying with Venturini.

“Every morning, Alberta sets the table for breakfast,” he remarks with a smile. And he reciprocates – when Gozzano gets back to Milan from his village in rural Piedmont, he brings his roommate fresh vegetables and wine produced by his friends at their vineyards. The two share a deep sense of respect for each other.

As with so many things, however, the Covid-19 pandemic has changed home sharing. In Milan, many matches were put on standby, as some students returned to their parents’ homes. But not all matches were forced to break. Thirty per cent of the intergenerational pairs matched by ensemble2générations decided to keep living together, including 69-year-old Vincent Sibout and 24-year-old Yassine Bouazza, who live in Guyancourt, a city near Paris. The two have spent more time together in the apartment since lockdown and kept doing their pre-pandemic activities – sharing suggestions for reading, Franco-Moroccan “gastronomic” exchanges, discussing politics.

“The people who stayed together were a sort of lifeline,” comments Alice Williams, home-share sector development officer at Homeshare UK. Interestingly, after the UK’s lockdown, the organisation has seen an increase in enquiries from older people who are now looking for home sharing and companionship.

Lucrezia Lozza is a freelance journalist and documentary filmmaker.