Since the 1950s, New York has been fondly known as the “city that never sleeps”. But over the past decade, cities across Europe and the US have begun to take the notion of a “24-hour city” more seriously. Having recognised the economic value of night-time activities, cities such as Amsterdam and London have appointed night-time mayors to help foster the night economy.

In London, these efforts have taken the form of a Night Time Commission, set up by the previous mayor, Boris Johnson, just a few months before Sadiq Khan took over in 2016. Khan then appointed a Night Czar, Amy Lamé, to oversee the development of the city’s first ever 24-hour strategy, together with the commission.

Their vision, released in July this year, focuses on supporting the arts, entertainment and hospitality industries favoured by a “creative class”, that supposedly helps cities to thrive. But in reality, culture and nightlife are only one small part of the night-time economy.

Beyond pubs and clubs

Actually, transport and storage, and health and social care sectors have the largest shares of people working at night. 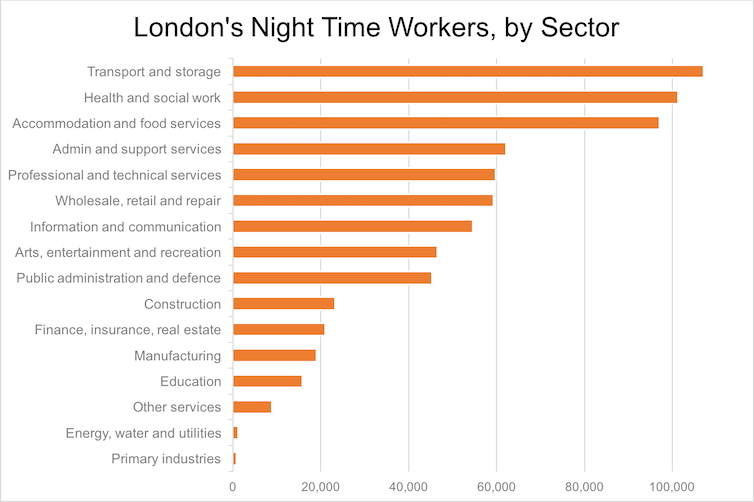 As shown in the figure above, arts and entertainment only account for 6.4 per cent of the employment in the night time economy, and hotels, restaurants and bars 13.4 per cent.

Reports show that the sectors with the highest economic impact are logistics and deliveries, followed by professional and social services and health and social work. While the entertainment and recreation industries may have a more visible presence on the city’s streets, they actually generate the least economic activity, contributing only £1.3bn to the total £40.1bn estimated impact.

Yet the narrow focus on London’s nightlife has led to the creation of a strategy which seeks to meet the needs of a relatively privileged part of the city’s population, and fails to reflect the true diversity of the night-time economy. This imbalance is also reflected in the Night Time Commission, which does not include representatives from the health and care sector, for instance.

The result has been a strategy which caters mainly for cultural consumers in the night time economy. There is less consideration of those who actually make the night time economy work, not only at the weekend but also during the week. It’s important to support nightlife venues, especially since they’ve undergone a massive wave of closures over the past few years. But London’s current 24-hour strategy does not pay enough attention to issues of unfairness and inequality affecting the city’s night-time workforce.

The trouble with transport

The types of goods and services provided at night suggest that night-time workers might fit a particular demographic profile. Employees from logistics, transport, health and social care sectors tend to be in lower paid jobs, and live further from the workplace, doubling the burden of travel cost and time. Because of this, efficient, affordable transport is a major issue for these workers. 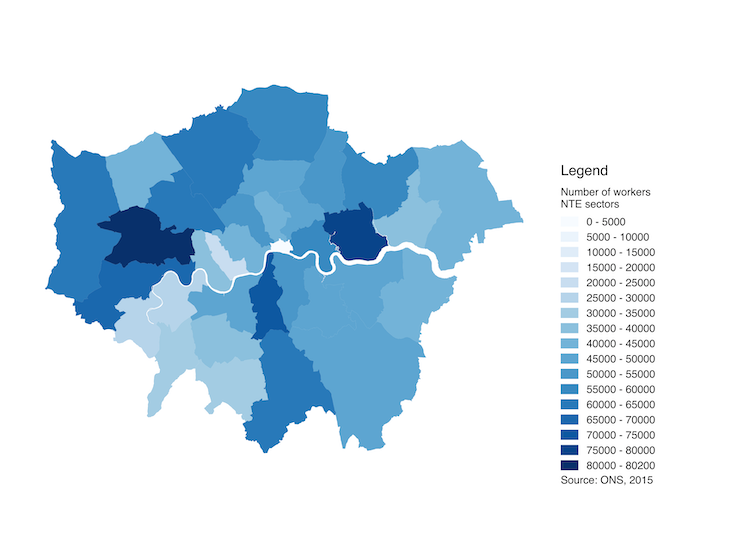 A map of the distribution of workers in night time economy sectors. Image: Jenny McArthur/author provided.

London’s night-time workers rely on off-peak services – with lower frequencies and greater chances of scheduled engineering works, this often leaves them with very limited travel options. Night buses are currently the only mode of transport available between 1am and 5am during the week – and TfL surveys show that they are essential for night workers: 51 per cent of passengers use the service to travel to or from work.

Our research explores the role of night time transport and the movement of low-paid workers around the city lend weight to these concerns. For example, evidence from the Royal College of Nursing – which has a high proportion of night-time workers – noted that healthcare workers finishing shifts between 12am and 2am are left with a slimmer service, facing longer waits, more changes and longer journeys.

What’s more, workers on the twilight shift face the prospect of sharing public spaces with people under the influence of alcohol and drugs, which can pose a threat to their safety.

Night time strategies are a tremendous opportunity to build cities that are more sustainable; for instance, reducing congestion by moving some transport, retail and logistics activities to the night time. But if more people are to work at night, then the needs of low-paid, night-time workers have to be better understood and accounted for within these strategies.

In Sweden for instance, 24-hour childcare services are available to parents working at night. When it comes to transport, this could be achieved through developing more frequent night bus services and expanding the night tube offer outside of weekend, focusing on tube lines that are directly serving the needs of night-time workers.