It is the middle of the 2040s. After years of warning, scientists have just confirmed that the tipping point for the West Antarctic Ice Sheet has been triggered. Governments around the world are horrified as the news filters through. The days when they could reverse climate change by cutting carbon emissions to reduce global temperatures have just come to an end. There is now no way of stopping global sea levels from rising by over four metres. Nations and islands around the world are about to be lost forever.

It’s not real life – not yet anyway – but a computer game being played by a group of delegates and other attendees at the UN COP24 Climate Change conference in Katowice, Poland. Earth Remembers plays a bit like a 30-person version of Football Manager. Closely mirroring the real-life world climate change negotiations that take place every six months, each affected player represents a different country and has to negotiate with everyone else about how they’ll spend their national budget. 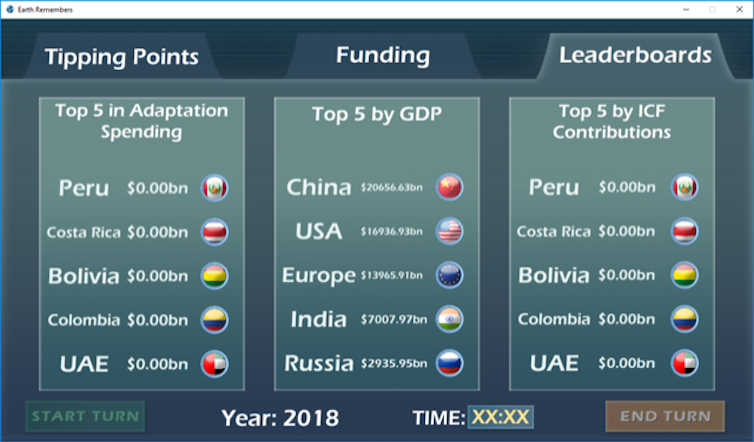 The game is the brainchild of a collaboration between undergraduates and academics from Glasgow Caledonian University, Utrecht University and the Purdue Climate Change Research Centre in Indiana. It uses an IPCC climate model to simulate the effects of each decision on carbon emissions, national GDP and the global temperature. Each turn skips forward five years, enabling players to “live” through the plausible future scenarios of 2033, 2038, 2043 and onwards out to 2118 to see how their decisions affect the world.

Games and the real world

The idea of using computer games, known as applied games, to help educate people goes back decades. Some might remember the “edutainment wave” of the 1990s, typified by games like Math Blaster (1994), where players had to do sums to release a tractor beam to pick up space rubbish.

Not only were such titles usually mediocre, the whole approach saw games as a kind of spoonful of sugar to make the nasty medicine of learning go down. It was bad teaching hiding inside bad games, and players were not usually fooled for long.

Fortunately, modern applied games are designed with a much better understanding of what makes games special. One of the best is the space exploration simulator Kerbal Space Program (2011). The object is to create a space programme for a race of little green humanoids called Kerbals. Players are encouraged to experiment and be creative. Once they have built the necessary equipment, they fly it with a simulator based on a realistic physics model.

The game wasn’t originally designed for educational purposes. But after NASA decided to back it, the developers created a version aimed at classrooms. Only by grappling with real-world trade offs between rocket components, life-support systems, fuel and weight, can players get the Kerbals to their nearest moon, the “Mun”, and then back in one piece.

Earth Remembers was designed with the same sense of jeopardy in mind. Should a country’s budget be spent on researching new green technologies that could, for example, extract carbon from the atmosphere and sink it in the ground? Should it be spent reducing greenhouse-gas emissions with investments in green energy sources or on adapting to the impacts of climate change?

When events trigger in the game, each player/nation is given an event card that describes what has happened to their country. In one game, for example, the US was told that Miami’s coastline had seen significant flooding as a result of the ice sheet melt and that millions of residents were going to have to be moved further inland at great cost to the country. Meanwhile, other nations were coming to terms with news that certain industries had been dealt a massive blow. 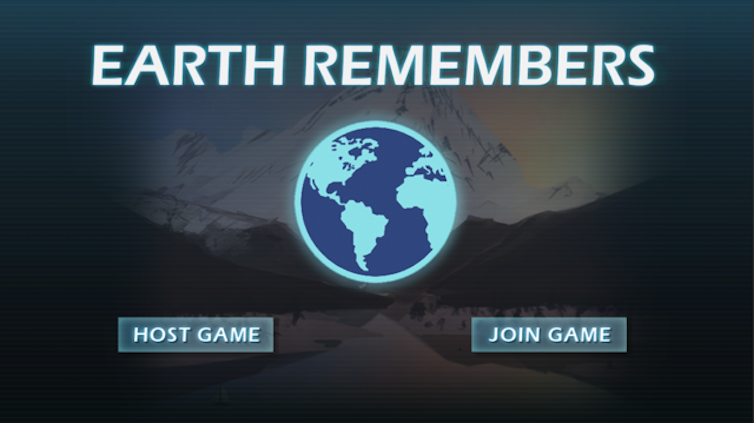 The whole point is to use narrative storytelling and imagination to make the human and economic cost of these events more concrete. As the Dutch psychologist Nico Frijda convincingly argued, people have emotional reactions to what is apparently real – not to what actually is real. Games give us a platform to create just such an apparent reality.

The final part of our game shifts 100 years into the future, and players are presented with scenarios derived from the decisions they have made. The Fijian people no longer reside in Fiji, for instance, but in a part of Australia renamed by one participant “Fijiland”. This prompted discussions about the challenges of identity loss, whether this community should be a separate nation, and who was responsible for this situation.

Our trip to Katowice was the second time we’d simulated the game, having previously demonstrated it to negotiators at the climate change talks in Bonn, Germany in the spring. When the West Antarctic Ice Sheet collapsed in one of the games in Katowice, the sense of alarm in the room was palpable. We got great feedback from players about the way the game made tipping points like this one much more real. Negotiators will hopefully have kept this in mind when it came to the real-life discussions.

Next for us is to demonstrate Earth Remembers for scientists and policy specialists in Washington, DC in a few days’ time. We are also hoping to develop further enhancements to the game. This is where the potential of applied games lies: in mixing together the scientific and the artistic; the rational and the emotional. Do this well and you have the potential to create meaningful change – and maybe even help avert disaster in the process.