My hometown of Corby is a former steelworks town in the East Midlands, UK. The town has among the lowest levels of social mobility in the country. In the BBC’s Great British Class Survey, Corby was classified as a “precariat” town, which means that many residents are from the most disadvantaged social class in Britain. Now the county council plans to turn Corby into one of the country’s biggest receivers of waste, with potentially four plants processing rubbish brought in from London, Birmingham and beyond.

The latest plans under review, submitted by the Devon-based Corby Ltd company, would involve importing 260,000 tonnes of waste into Corby each year, creating around 30 full-time jobs at a new energy recovery facility, where rubbish is burned to generate electricity. The proposed site is within 100 metres of a primary school and close to a struggling secondary school. This would mean an estimated 175 heavy goods vehicles transporting waste past disadvantaged children each day.

This risks signalling to young people that they don’t matter. Children were born in Corby with lifelong disabilities from the inadequate disposal of toxic waste, following the closure of the steelworks just over 40 years ago, and the landmark ruling about this case was only decided in 2009, so the trauma is fresh in the town’s collective memory. And dirt has had a deep and damaging meaning for working-class communities, which planners need to appreciate.

A leading scholar on class, Beverley Skeggs, has shown how the English working class have historically been associated with dirt, filth and waste. For example, under the Victorian poor laws, the most socioeconomically disadvantaged people were viewed as dirty, diseased, idle and immoral, and therefore held to be undeserving of state support and sent to the workhouse. Such laws formalised standards of respectability, which still resonate today in the pressure felt by working-class people to work hard, avoid claiming benefits, raise children well, keep a clean house and so on.

My own research has found that residents in Corby uphold norms of respectability. Cleanliness is very important, and being associated with dirt or rubbish can have a negative impact on someone’s self-esteem. Calling someone dirty or unclean is a significant insult – and that extends to calling someone’s house, car, street, estate or town dirty. 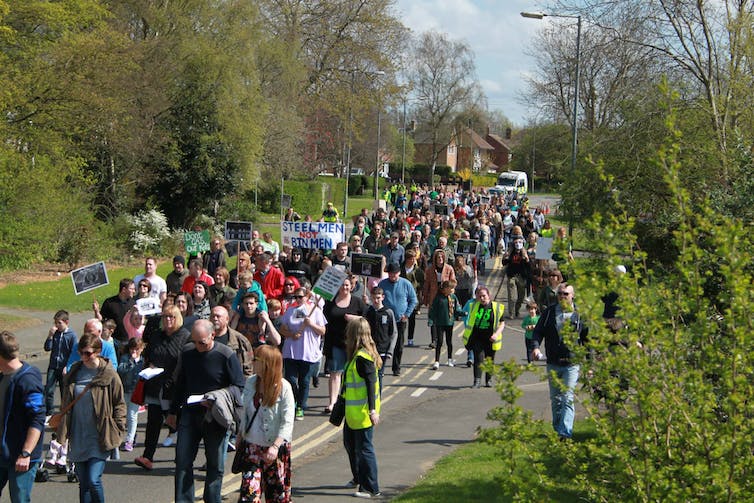 There are plenty of examples from around the world which attest to the psychological harm of associating working-class people with dirt. Lisa McKenzie – a sociologist and lecturer at Middlesex University – explains how “painful”, “difficult” and “upsetting” it was, as a teenager growing up on an English council estate, to learn that people thought of the working class as being dirty.

Many other writers from working-class backgrounds have documented similar experiences, from the work of British writer Lynsey Hanley in her books Estates and Respectable, to the moving biographies of French sociologist Didier Eribon and French writer Édouard Louis. Most recently the US president, Donald Trump, drew criticism for referring to the district of Baltimore as “disgusting, rodent and rat infested” – evoking a stereotype of impoverished and majority black areas which dates back to slavery and the American Civil War.

The decision for Corby to receive huge amounts of waste might rest on that middle-class view of the poor as dirty. But even if decision-makers do not actively associate Corby or the working class with dirt, their failure to appreciate the symbolic harm of mainlining rubbish into disadvantaged communities is a concerning oversight.

At home and abroad

The plans to offload waste to Corby is but one example of the wealthy being chiefly responsible for environmental damage caused by consumption, while disadvantaged communities face the harmful consequences. The World Bank reports that, “though they only account for 16 per cent of the world’s population, high-income countries generate about 34 per cent, or 683m tonnes, of the world’s waste”. The Carbon Majors Report found that between 1988 and 2015, 100 companies have been responsible for 71 per cent of global greenhouse gas emissions.

Indeed, rich nations such as Britain have treated poorer populations across the world as sites for waste disposal for many decades. Until January 2018, China was the largest global receiver of waste. But concerns about pollution and contamination led the Chinese government to change policy and they no longer accept foreign imports of certain types of plastic. Since then, rich countries have been exporting waste to various disadvantaged communities in Asia – including in Indonesia, Thailand, Vietnam and Malaysia – with devastating consequences.

Now the lack of care for disadvantaged communities is happening here in the UK, as well as elsewhere. And as a result, inequality is on course to become more pronounced, visible and entrenched. Whether at home or abroad, this strategy does not work.

In the present day, when local governments and states are recognising the climate emergency, it is crucial to develop sustainable and ethical ways to manage waste. Instead of dumping the problem on disadvantaged communities, waste needs to be visible to those who are making it. Perhaps then governments would start to address the more pressing issue at hand: how to prevent waste in the first place.