Once again, the summer of 2018 in the Northern Hemisphere has brought us an epidemic of major wildfires.

These burn forests, houses and other structures, displace thousands of people and animals, and cause major disruptions in people’s lives. The huge burden of simply firefighting has become a year-round task costing billions of dollars, let alone the cost of the destruction. The smoke veil can extend hundreds or even thousands of miles, affecting air quality and visibility. To many people, it has become very clear that human-induced climate change plays a major role by greatly increasing the risk of wildfire.

Yet it seems the role of climate change is seldom mentioned in many or even most news stories about the multitude of fires and heat waves. In part this is because the issue of attribution is not usually clear. The argument is that there have always been wildfires, and how can we attribute any particular wildfire to climate change?

As a climate scientist, I can say this is the wrong framing of the problem. Global warming does not cause wildfires. The proximate cause is often human carelessness (cigarette butts, camp fires not extinguished properly, etc.), or natural, from “dry lightning” whereby a thunderstorm produces lightning but little rain. Rather, global warming exacerbates the conditions and raises the risk of wildfire.

Even so, there is huge complexity and variability from one fire to the next, and hence the attribution can become complex. Instead, the way to think about this is from the standpoint of basic science – in this case, physics. 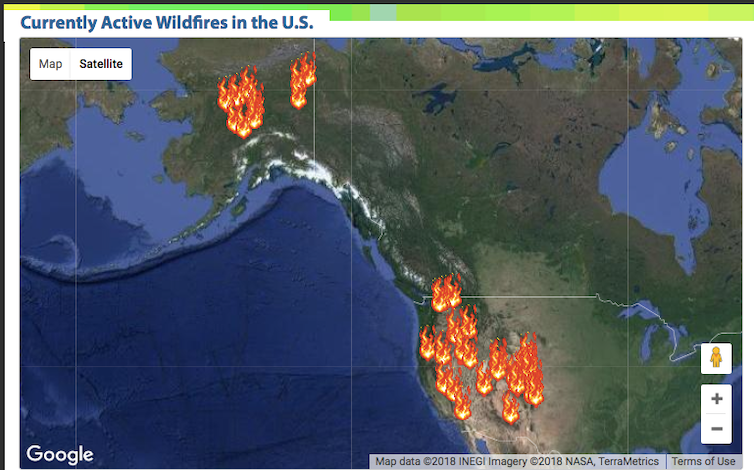 This year is proving to be another active wildfire season. Image: Climate Central/creative commons.

To understand the interplay between global warming and wildfires, consider what’s happening to our planet.

The composition of the atmosphere is changing from human activities: there has been over a 40 per cent increase in carbon dioxide, mainly from fossil fuel burning since the 1800s, and over half of the increase is since 1985. Other heat-trapping gases (methane, nitrous oxide, etc.) are also increasing in concentration in the atmosphere from human activities. The rates are accelerating, not declining (as hoped for with the Paris agreement).

This leads to an energy imbalance for the planet. 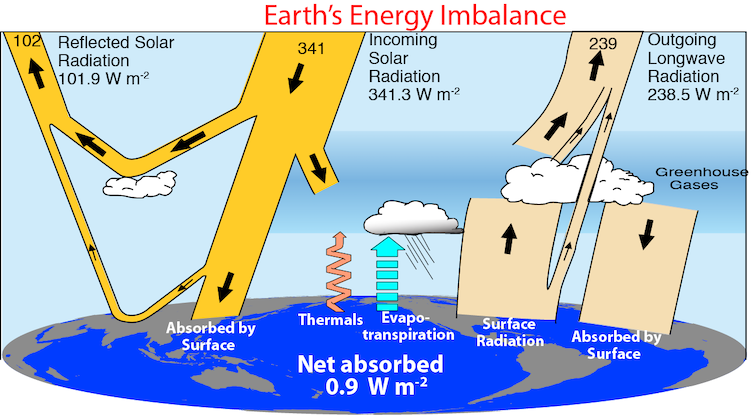 The flows of energy through the climate system are schematically illustrated with numbers on the top-of-atmosphere values and net energy imbalance at the surface. Image: Trenberth et al. 2009.

Heat-trapping gases in the atmosphere act as a blanket and inhibit the infrared radiation – that is, heat from the Earth – from escaping back into space to offset the continual radiation coming from the sun. As these gases build up, more of this energy, mostly in the form of heat, remains in our atmosphere. The energy raises the temperature of the land, oceans and atmosphere, melts ice, thaws permafrost, and fuels the water cycle through evaporation.

Moreover, we can estimate Earth’s energy imbalance quite well: it amounts to about 1 watt per square meter, or about 500 terawatts globally.

While this factor is small compared with the natural flow of energy through the system, which is 240 watts per square meter, it is large compared with all other direct effects of human activities. For instance, the electrical power generation in the U.S. last year averaged 0.46 terawatts.

The extra heat is always the same sign and it is spread across the globe. Accordingly, where this energy accumulates matters.

The heat mostly accumulates ultimately in the ocean – over 90 per cent. This added heat means the ocean expands and sea level rises.

Heat also accumulates in melting ice, causing melting Arctic sea ice and glacier losses in Greenland and Antarctica. This adds water to the ocean, and so the sea level rises from this as well, rising at a rate of over 3 milimeters year, or over a foot per century.

Global ocean heat content for the top 2,000 meters of the ocean, with uncertainty estimates by the pink region. Image: ScienceAdvances/creative commons.

On land, the effects of the energy imbalance are complicated by water. If water is present, the heat mainly goes into evaporation and drying, and that feeds moisture into storms, which produce heavier rain. But the effects do not accumulate provided that it rains on and off.

However, in a dry spell or drought, the heat accumulates. Firstly, it dries things out, and then secondly it raises temperatures. Of course, “it never rains in southern California” according to the 1970s pop song, at least in the summer half year.

So water acts as the air conditioner of the planet. In the absence of water, the excess heat effects accumulate on land both by drying everything out and wilting plants, and by raising temperatures. In turn, this leads to heat waves and increased risk of wildfire. These factors apply in regions in the western U.S. and in regions with Mediterranean climates. Indeed many of the recent wildfires have occurred not only in the West in the United States, but also in Portugal, Spain, Greece, and other parts of the Mediterranean. 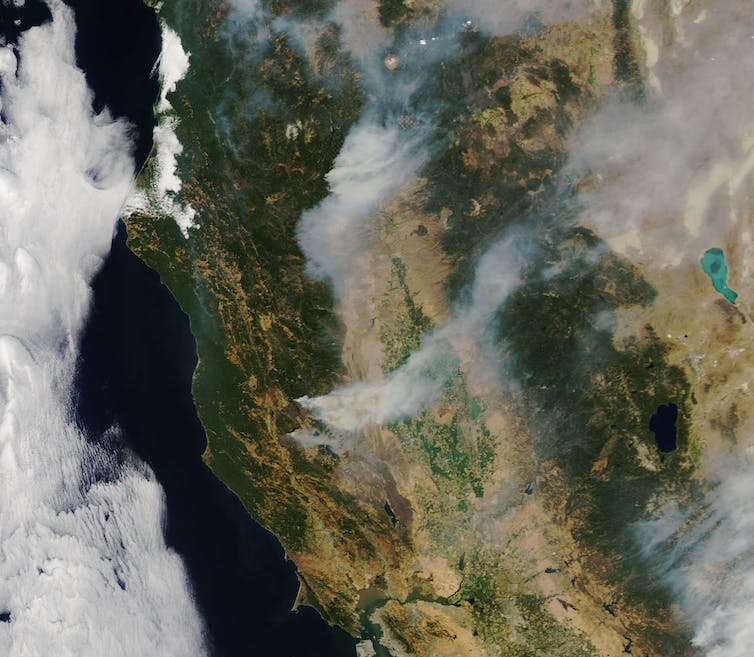 A satellite image of the Carr Fire in California. Drought conditions, in addition to a lot of dead trees and vegetation, are contributing to another year of severe wildfires. Image: NASA.

The conditions can also develop in other parts of the world when strong high pressure weather domes (anticyclones) stagnate, as can happen in part by chance, or with increased odds in some weather patterns such as those established by either La Niña or El Niño events (in different places). It is expected that these dry spots move around from year to year, but that their abundance increases over time, as is clearly happening.

Coming back to the original question of wildfires and global warming, this explains the argument: there is extra heat available from climate change and the above indicates just how large it is.

In reality there is moisture in the soil, and plants have root systems that tap soil moisture and delay the effects before they begin to wilt, so that it typically takes over two months for the effects to be large enough to fully set the stage for wildfires. On a day to day basis, the effect is small enough to be lost in the normal weather variability. But after a dry spell of over a month, the risk is noticeably higher. And of course the global mean surface temperature is also going up.

“We can’t attribute a single event to climate change” has been a mantra of climate scientists for a long time. It has recently changed, however.

As in the wildfires example, there has been a realisation that climate scientists may be able to make useful statements by assuming that the weather events themselves are relatively unaffected by climate change. This is a good assumption.

Also, climate scientists cannot say that extreme events are due to global warming, because that is a poorly posed question. However, we can say it is highly likely that they would not have had such extreme impacts without global warming. Indeed, all weather events are affected by climate change because the environment in which they occur is warmer and moister than it used to be.

In particular, by focusing on Earth’s Energy Imbalance, new research is expected to advance the understanding of what is happening, and why, and what it implies for the future.