Queer life was highly visible in Western Canada last year. In May, Vancouver declared 2018 the “Year of the Queer,” celebrating decades of service that the city’s cultural organisations have provided for lesbian, bisexual, gay, transgender, queer and two-spirit (LGBTQ/2S) people across the region.

Yet 2018 also saw the loss of multiple queer venues and gay bars. While economic forces, such as rapacious gentrification are part of the story and struggle, our research shows that something creative and generative is happening in the city as well.

In the face of changing urban landscapes, economic hardships, and more straights moving into historically gay neighbourhoods, queer pop-ups — ephemeral gathering spaces whose impact lingers among revellers long after the night is over — now play a large role in the fight for LGBTQ/2S equality.

Queer life germinated in “scattered gay places” across cities in North America from the late 1800s to the Second World War. Inside cabarets, bars, theatres or outside in public parks, washrooms and city streets, queers found spaces which could hold and celebrate transgressive sexual connections while also providing respite from daily experiences of discrimination and social exclusion.

The formation of queer community spaces has always been controversial. Cultural and legal backlashes marred early developments. A host of laws and regulations tried to suppress and contain homosexuality in North America by limiting its presence in the public sphere.

These measures resulted in frequent hostilities, police raids and violence. Queers congregated together not just to find love or community, but to protect themselves, to protect one another and to find refuge. Pride parades, now celebrated worldwide, commemorate these early turf wars.

Researchers have written a great deal on the cultural and political importance of gay districts in urban centres, and they have grappled with concerns that these areas, along with the establishments they house, are fading.

But innovative urban forms challenge arguments about the death and demise of queer spaces in the city. Our research suggests that queer pop-ups, or temporary cultural gathering spaces, cater to diverse and often marginalised queers.

Some gaybourhoods are dwindling in their residential concentration and gay bars are dropping like flies. But new queer place-making efforts are emerging. 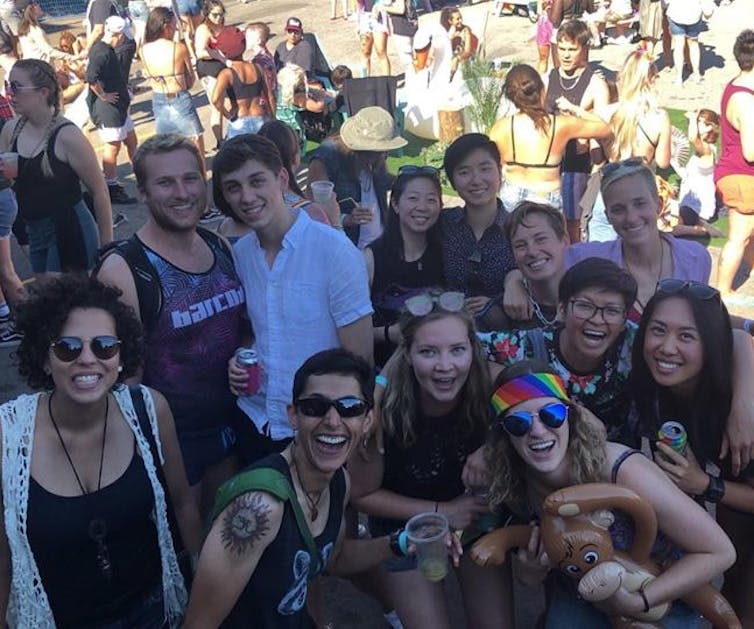 Two of the authors at the queer pop-up in 2018 at East Side Studios in Vancouver. Ryan is on the far left, back row, Adriana is on the far right of the back row. Image: author provided.

Unlike gaybourhoods and gay bars, pop-ups are intentional in how they address persistent, intersectional forms of inequality. Queer pop-ups offer patrons a space to explore non-binary forms of gender and sexual identities, and especially a place to experience collective effervescence among queer people of colour, and femme lesbians.

Some pop-ups create environments that are explicitly trans-inclusive, consent-focused, and sex-positive. Pop-ups are not panaceas for queer life. Pop-ups can also be places where issues around socioeconomic status, gender identity and expression, and racial inequality are called out.

Yet these spaces directly and indirectly encourage dialogue on inequalities within the queer community, conversations that help produce safer spaces for marginalised queers to find each other and forge enduring queer consciousnesses.

Queer pop-ups show similar trajectories of infighting and compromise that the LGBT social movement encountered from the late 1970s through the early 2000s when trying to forge a collective consciousness, gain social visibility and win legal rights.

These turf wars, expressed as contests over space and inclusion, are generally sparked over three perennial concerns: privilege, race and gender. One interviewee, a 20-year-old self-identified queer, trans person of colour (QTPoC), who spoke about Vancouver’s gay district told us:

“It’s very rare that we’ll ever have a conversation about politics [in gay bars]. It’s just about partying and things that we kind of see as very stereotypical portrayals of gay culture: like going out, dancing, drinking, fucking.”

Historically, gaybourhoods have served an important role in the fight for LGBT rights, but they have also developed to cater to a specific cis-gender, white, middle-class, male sensibility. One 30-year-old, white, trans DJ put it bluntly, “the mainstream scene is just not welcoming to trans people, in my experience,” adding that verbal transphobic harassment is common in the streets of Vancouver’s gaybourhood.

At Vancouver Pride this year we were reminded of this schism at a local pop-up event. “Gay men won’t come here, it’s too trashy,” shouted a white Australian lesbian playfully to friends over loud music. We were at Eastside Studios, a large warehouse turned into the newest collaborative queer venue in Vancouver.

The comment was striking because it highlights the visible bifurcation occurring in queer life and queer consumption in Vancouver. Many gay men tend to patronise businesses and events in the West End, Vancouver’s official gaybourhood; whereas, other members of the LGBTQ community are scattered across the city at events and venues that are far less permanent. Eastside Studios attempts to break through the homonormative bent some gay bars perpetuate. It is a space that generously houses some of the struggling pop up events who lost space to gentrification in Vancouver’s out of control rental market.

Historically, pop-ups arose as the first signs of urban sexual transgression. They continue to emerge as spatial innovations which nurture transgressive queer diversities that do not have space or representation in the gaybourhood. Weekly social media blasts via Facebook or Instagram and word-of-mouth dissemination play an important role in linking queers around the city to these events. Pop-ups take different tones and establish different vibes among patrons. Collectively, pop-ups highlight the many important projects local queers are undertaking to increase the plurality of what queer life looks like and how it is expressed.

Marriage is the leading story in many headlines these days, but queer struggles for equality were never only about relationship recognition or acceptance into the mainstream.

Continuing these fights is perhaps what makes queer pop-ups unique. Organisers of these events are intentional and responsive to such concerns. They seek to create new worlds that soften the impact of inequalities, both in gaybourhoods and in other parts of Canadian cities as well. 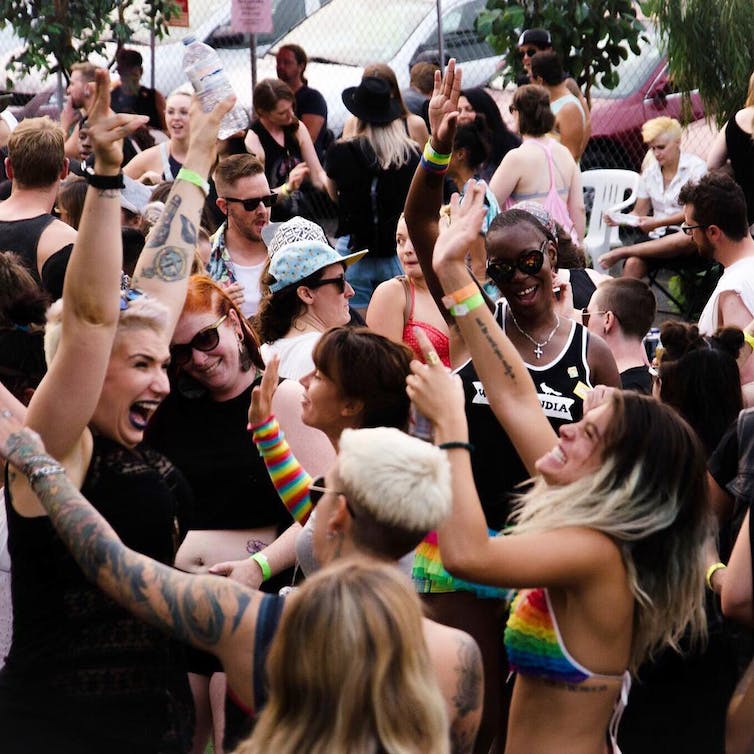 Many of these spaces are an opportunity for patrons to travel in a re-imagined world, even if only for the night. While not all pop-ups that appear survive, the ones that do matter, fundamentally, because they create spaces that resist heteronormative culture and homonormativity, address intersecting inequalities, assert and anchor queer cultural and political identities, and promote well-being for a wider portion of the community in ways that gaybourhoods used to and have always had the potential to.

Pop-ups nourish queer lives in ways that gaybourhoods and gay bars historically had. They emerge as temporary meeting grounds where diverse, oftentimes marginalised, queers flock for community and collective, momentary release. They allow patrons to dance and comfortably explore the implications of their gender and sexual identities around like-minded individuals. At times they are more than friendly social gatherings, becoming sites where the moral arch of the community is shaped through demonstrations on urgent issues impacting queer lives and the surrounding community.

This article is from the CityMetric archive: some formatting and images may not be present.
Topics in this article: Cities