On hot summer days in Bangalore, India, it is common to see public water taps on roadsides hissing and spurting as water struggles to come out. People crowd around the tap with pots of brightly coloured plastic, burnished brass or steel, waiting for their turn. Many of these people have come from homes without such luxuries as indoor plumbing and will return carrying enough water to last several days. More privileged citizens have water piped to their houses in larger quantities – and more frequently. But even for them, interrupted water supply and rationing have always been a fact of daily life.

Bangalore is perhaps one of India’s most globally visible cities, owing to its reputation as India’s Silicon Valley. Corporate buildings and malls with shimmering glass facades vie for space with residential high rises and villas, bolstering the city’s popular image as a vibrant and booming metropolis with an entrepreneurial young population. But informal settlements and slums coexist alongside this image of prosperity, and residents – poor and affluent alike – face the trials of living in a city starved of water: a legacy of colonial policies that relied on vast technological solutions to solve local problems.

Bangalore is not alone in its water woes – cities across the globe struggle to meet water requirements every day. Although Cape Town’s water crisis has eased, residents are still limited to using 50 litres of water each, per day. Other settlements are also affected. In Mexico City, water supply is frequently interrupted while, in Brazil, São Paulo’s main water reserves were below 15 per cent as of 2017. Indonesia’s capital Jakarta, meanwhile, is facing severe groundwater depletion. Droughts are shaped by each city’s development over time – and these recent shortages have shown just how shaky the infrastructure which supplies their water has become.

A history of water

Bangalore tends to be naturally arid, because of its location in the rain shadow of the Western Ghats hill range. Records from the 6th century onwards show that successive rulers of the city invested in creating an interconnected, community-managed system of tanks and open wells. The shallow aquifers of the wells were recharged by the tanks, across an elevation gradient that harvested rainwater.

Since around 1799, different authorities took control of the tanks – first the colonial state, and later on the independent Indian government. These tanks were the main water supply infrastructure for almost a century, though they faltered during periods of drought and famine. To meet the rising demand, the municipal and public works departments considered deepening reservoirs or building new ones. By 1885, the city’s water supply was running low, and the colonial government responded by setting up piped infrastructure, bringing water from sources 30km away including the Hesarghatta and then the TG Halli reservoirs. But none of these fixes could meet demand for very long.

Meanwhile, given the new dependency on piped water infrastructure, the old tanks and wells became disused, polluted or built over. After India gained independence in 1947, the Bangalore Water Supply & Sewerage Board (BWSSB) was established. In response to the city’s water supply issues, the board floated the idea of pumping in water from the river Cauvery – more than 100km upstream from Bangalore. The project started in 1974 and continues to this day, reaching its fifth stage in 2018.

With the threat that water would run out still looming large, authorities have since explored other possibilities. In 2016, the state government proposed to divert water from the Yettinahole river, 300kms from Bangalore. Scientists also explored the feasibility of constructing a reservoir under the Arabian Sea, to impound that water for supply. The central government of India went a step further and considered transferring surplus water from the north flowing river Godavari into the southern Cauvery.

The estimated costs of these large-scale proposals were massive – billions of dollars could be spent without delivering guaranteed water security. Instead, the authorities seek to reallocate limited supplies of water – though even that is done unfairly and unevenly.

Piped water supply systems cater only to central Bangalore, while the outskirts rely on alternatives including domestic bore wells or private water tankers, tapping into and depleting deep groundwater aquifers. These services are typically used by the urban poor, but operated on a for-profit basis, which means they actually come at higher costs than the heavily subsidised centralised water supply system.

While governments have floundered, Bangalore has seen a resurgence of citizen-led collectives working to protect and rejuvenate the old tanks and open wells – and open them up to poor and disadvantaged citizens. These collectives have also innovated, exploring how treated sewage can contribute to the supply. In Jakkur Lake, for instance, treated sewage is filtered through a human-made wetland and into the lake itself, fostering a healthy ecosystem as well as helping to recharge groundwater.

Initiatives have blossomed online, too: the Facebook page Open wells of India and the world is a place where members can upload photographs of any open wells they encounter, along with their location. By documenting many little known open wells which survive across the city and beyond, it provides a fascinating glimpse into the potential such options hold for harnessing and storing rain water. One particularly poignant image was shared by local man Vishwanath Srikantaiah: a massive open well, recharged by the Jakkur lake. 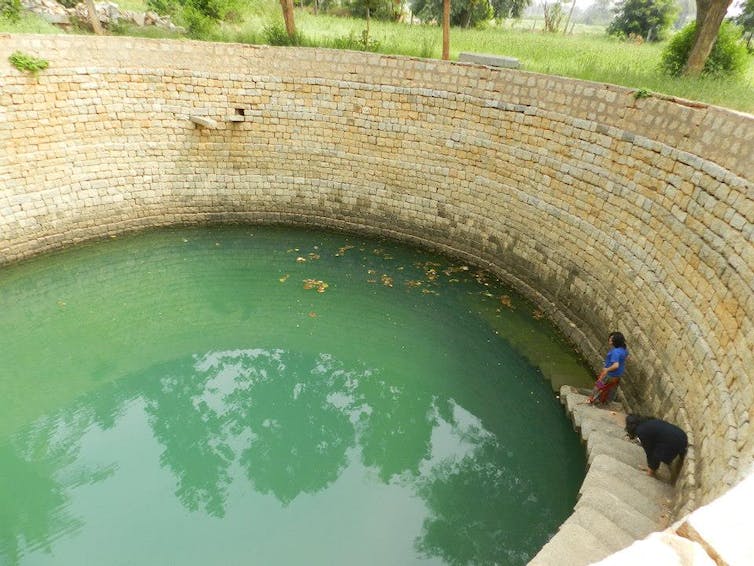 The efforts of Biome, India Cares Foundation and Friends of Lakes – combined with the local expertise of traditional well diggers – have restored seven public wells within the city’s well-known Cubbon Park. Thanks to an approach that combines local knowledge and innovative problem solving, the wells now produce about 65,000 litres of water per day and help to meet the water demands of the park.

Grand technological visions have proved incapable of meeting Bangalore’s needs since colonial times. But local, community-led measures to manage and replenish water have a good chance of creating a water-secure, resilient city: an object lesson for those planning cities for the future.

This article is from the CityMetric archive: some formatting and images may not be present.
Topics in this article : Utilities